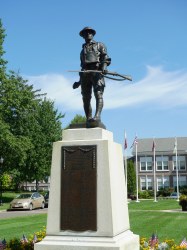 This World War I monument sits in the center of a municipal oval in front of the public library & an elementary school.  It consists of a bronze doughboy statue atop a stone pier.  Attached to the pier is a vertical rectangle bronze plaque with an honor roll of Verona's citizens who died in the war.

The statue's artist is unknown, but the foundry was JM Fiske & Co. - a preeminent monument maker in New York City in the late 19th & early 20th centuries.  A duplicate of this sculpture is in Bronx, NY and is currently being restored by the NYC Parks Department after taking molds of the Verona statue for replication.  Plans are to install the Bronx statue opposite Yankee Stadium.