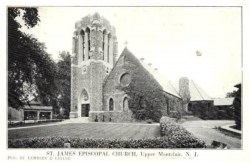 The Memorial Bell Tower at St. James Episcopal Church replaced the original steeple in 1919, honoring the church members who served in World War I.   Seven young men died in the war; 91 others fought and returned home.

The Bell Tower contains 13 bells that have rung hourly for almost a century.  Seven bells are engraved with the name of one of the soldiers killed.

Beneath the cornerstone of the tower is a bronze medal commemorating the signing of the Treaty of Peace at Versailles.  The buttresses contain shields symbolizing the US, England, Belgium, France & Italy, as well as Victory, and the 29th & 78th Army Divisions which included New Jersey troops.  A bronze tablet honor roll is set into the tower's vestibule wall.