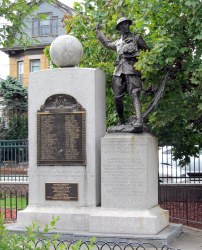 This World War I monument is a two-columned structure.

On the right is a bronze doughboy statue atop a rectangular granite pedestal engraved with a dedication to the men who served the US in the war.  It was erected by the town of West Hoboken, NJ (now part of Union City, NJ).

The uniformed soldier is ready to throw a grenade with his right hand; in his left he holds a rifle, the butt of the gun resting on the ground.

On the left is a taller rectangular granite pedestal topped by a granite orb.  It contains a bronze honor roll plaque with a bas-relief across the arched top.  The image is of a striding Liberty flanked by a soldier on her right & a sailor on her left.  in the bottom two corners are images of a tank & an airplane.  The plaque lists those men of West Hoboken who gave their lives in the war.