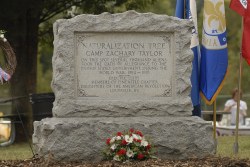 The "Naturalization Tree" was a sprawling North American Ash Tree, that once stood along , near . It was located approximately 300 yards from this new site.

It was a mature tree that stood for many decades after World War 1 ended, until it was struck by lightning, and unfortunately, had to be taken down.

All that remains of this famous tree is this marker. It was erected by the Fincastle Branch of The Daughters of the American Revolution, and first dedicated on November 11, 1921.

The history of naturalizing foreign born citizens after enlisting in the US Armed Forces, began during the American Civil War.

At the onset of the US entering World War 1, Congress passed the Naturalization Act of May 22, 1917, which amended the 1862 law to read “Any Alien who may under existing law,  become citizens of the US with 1 year of Military Service”. The preceding requirement was 4 years’ service. However, it specifically excluded this right to all those of Asian descent.

The “Act of May 9, 1918” again amended the law "to provide immediate naturalization of alien soldiers as US citizens upon enlistment, and was also expanded to include Filipino and Porto Rican nationals.

It was not until “The Immigration and Naturalization Act of 1953” that all Asian’s were granted this right.

The large ash tree was selected as the location for the swearing in ceremonies by Lt. Perkins the Naturalization Officer and . He said he selected this site "because the men could stand and directly face the Stars and Stripes that flew over the Camp".   We have now re-united the Monument with the Stars and Stripes again, these some 94 years later.

On Wednesday, October 2, 1918, at 3:00 pm, 400 alien soldiers at Camp Zachary Taylor, swore allegiance to the . The ceremony that granted these men citizenship, took place under the crown of the mature ash tree on the slope of Flag Hill.

John Walsh, the alien examiner, stated that "he was well pleased with the group of foreigners, and they showed the making of splendid soldiers".

Seventeen nationalities were represented that day. Gilmore Jacob Gayle, a native of , was one of those individuals who received citizenship on October 2nd.

He was a citizen of Great Britain, a graduate of the , and he was fluent in several languages.

He was the first black man to be sworn in as a Citizen at . Gayle was an Honor Graduate of the Field Artillery Officer Training School (FACOTS) that was being conducted at from June 1918 to January 1919.

Shortly after his naturalization as a citizen, Gayle received a commission in the 814th Pioneer Infantry Division that was based here at .

In Another ceremony that took place on October 12, 1918, 1600 men swore allegiance to the . It was the largest single group ever naturalized at this camp.

In January 1921, The Naturalization Tree was one of 10 tree's "Inducted into the American Forestry Association's" "TREE HALL OF FAME".

It was featured in the New York Tribune, who noted that "The Naturalization Tree was selected because more aliens have taken the oath of allegiance under it's branches than any other tree in the world".

The Naturalization Tree was famous all across the , if not the free world.

I would like to take this opportunity to thank all of those men and women, who from the time of the American Civil War, through the Mexican-American War, World War 1 and 2, the Korean War, Vietnam and up through today, who have placed their lives in harms way, to defend a country of which they were not yet citizens.