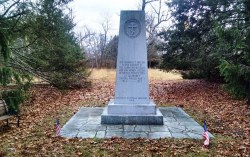 The Talerhoff Internment Camp Memorial was erected in 1964 by members of the Russian-American community to pay tribute to the memory of the men & women placed in the Austrian camp during World War I.

Jackson, NJ has a Russian community due to the employees at the Russian ordinance proving grounds in adjacent Lakehurst, NJ.  These were "White Russians," originating from Minsk (today's Belarus) around the time of the Bolshevik Revolution in 1917.  These citizens formed the Russian Consolidated Mutual Aid Society of America (ROVA), who helped create this memorial.

This monument consists of a granite tapered pillar atop a two-tiered rectangular stone base.  It has two identical sides - one in English, the other in Russian - consisting of a relief of the Russian Orthodox cross encircled in a laurel wreath above an inscription dedicating the monument.