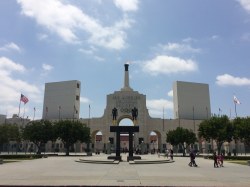 "The Greatest Stadium in the World"
Over twenty three thousand Angelenos had served in the armed forces, more than 450 of whom died in service, and within weeks after the Armistice, discussions on how best to honor the troops had become heated.  Exposition Park was chosen as a prime location for what would be the city's main war memorial.  Los Angeles was already trying to get a large athletic complex built, so the idea was advanced to make a multi-purpose stadium that could be hold sporting, civic, and memorial events. The stadium was dedicated as a perpetual memorial to LA County Veterans of the World War. Memorial Day and Armistice Day programs would be held in the stadium for decades. Secretary of Commerce (and future President) Herbert Hoover spoke at one and many famous dignitaries would through the years.  In 1968, top Great War Air Ace Eddie Rickenbacker headlined a Veterans Day ceremony at Expo Park. Though no text exists of his remarks, this was apparently when the Coliseum was rededicated, not just to LA County's war veterans, but to "all those who served in World War I."  The Los Angeles Memorial Coliseum seeks to remember its heritage as not only a stadium of considerable athletic achievement, but as a venue that pays tribute to those who answered the nation's call nearly one hundred years ago