Memorial Grove of the Great War 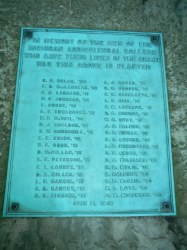 Memorial Grove of the Great War

The West Circle neighborhood is known for its beautiful Collegiate Gothic dorms, with beautifully sculpted gardens and peaceful stands of trees. One grove of trees though holds exceptional significance in the legacy of our university. Just east of Williams Hall is a grove of thirty-three oak trees overlooking Michigan Avenue. Few students notice the nondescript fieldstone slab nestled within the small park space. 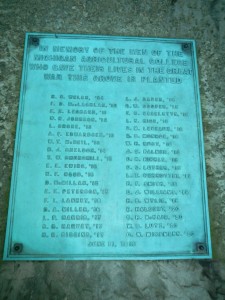 A brass plaque explains that this grove of trees is a memorial to the thirty-three students and graduates of the college who gave their lives in World War One. Back then our school was still the Michigan Agricultural College (M.A.C.), and contained few of the buildings that now dominate our campus. Next year will mark the hundredth anniversary of the start of what would become known as the Great War. The conflict exploded the world into the modern era, where industrialized warfare clashed with outdated military doctrine creating tragic consequences. In all some 8,500,000 soldiers would die in the conflict that pitted the Allied Powers (France, Russia, America, and the United Kingdom) against the might of the Central Powers (Germany, Austria-Hungary, and the Ottoman Empire).

America would not enter the war until 1917, when German U-boat attacks on commercial vessels would compel the nation to declare war on the Central Powers. America would mobilize over four million men to fight in Europe as part of the American Expeditionary Force. American soldiers would play a pivotal role in the battles of the Second Battle of the Marne and Meuse-Argonne Offensive. Ultimately America’s contribution would play a key part in bringing about the end of the war, but with a cost of 116,516 soldiers killed in action and a further 204,000 wounded.

Among the men who would never return home were students and alumni of the Michigan Agricultural College. In all thirty-three students and graduates of the college would give their lives in service to their country. Ten of the young men would never live to see their graduation from M.A.C. Their sacrifice would not be forgotten though. 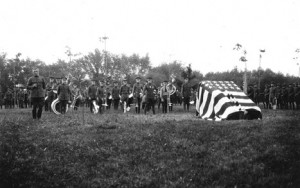 The college community decided a memorial grove overlooking the Red Cedar River and Michigan Avenue would be a fitting way to pay respect for their fallen brothers. The planning for the memorial was headed by the Forestry Department lead by faculty chair Professor Alfred K. Chittenden (for whom Chittenden Hall is named after). An oak tree would be planted for each of the soldiers and a large fieldstone would bear a plaque listing the soldier’s names.

The dedication took place on the college’s Commencement Day of 1919. Following a parade and a review of the college’s R.O.T.C. unit, Lieutenant Colonel A. H. Gansser of the 125th infantry formally dedicated the memorial grove. Gansser was well known in Michigan for the published letters he would send from the front, and was well regarded as a skilled speaker and critical analyst of politics and the war. The day was especially meaningful to Gansser, as many of the memorialized men were fellow members of the 125th infantry.

The thirty-three oak trees still shade the sidewalks west of Wilson Hall and the memorial is right off the sidewalk following Beal Street. This quite corner of MSU’s campus may remain largely unknown to the student body, but it remains a somber and beautiful reminder to the sacrifices made by our fellow Spartans. 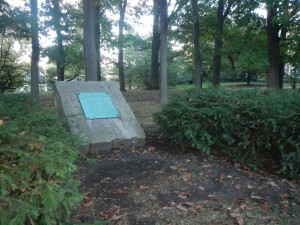