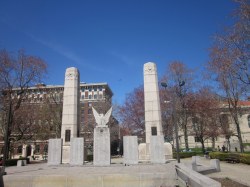 The park was dedicated on November 11, 1926, after the Grand Rapids Council of the American Legion and public contribution funded memorial pillars in honor of WWI vets. In 1945, a citizens group petitioned for a WWII veterans memorial, and coupled with interest for honoring those who served in the Korean War, funds were secured for the addition of five granite pillars to the park. In 1975, two more pillars were added to honor Vietnam veterans.

Names of those who died in WWI appear on eight bronze bronze plaques placed on the sides of the granite pillars. Flowers commemorating their sacrifice are place at the base of both monuments. The plaque reads, "ERECTED BY THE CITIZENS OF GRAND RAPIDS WITH FUNDS VOLUNTARILY SUBSCRIBED THEREFORE AND DEDICATED NOVEMBER 11, 1926 TO THE MEMORY OF THE MEN AND WOMEN OF GRAND RAPIDS WHO MADE THE SUPREME SACRIFICE IN THE SERVICE OF THEIR COUNTRY IN THE WORLD WAR. The smaller monument visible between the two pillars is a bust of Thomas Gilbert.