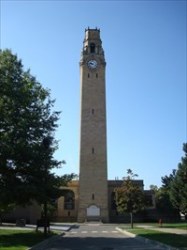 The main campus is located on the southeast corner of McNichols and Livernois, at 4001 West McNichols; it opened in 1952 and is marked architecturally by the University Clock Tower, a structure built as a memorial to U of D students lost in World War I.Access the campus via the McNichols entrance. You can't miss this grand tower. As you walk up to the base, you will see, etched in stone at the base:"TO THE UNIVERSITY OF DETROIT MEN WHO DIED IN THE WORLD WAR 1914-18OUR HONORED DEADJOHN DesCHAMPS – CHARLES HARRISON – LOUISMANS – EDWARD J BURNS – THOMAS G KENNEDYALFRED FULLER – ROGER S MCNAMARA – JAMESWILLIAMS – LIONEL ESLIN – RUSSEL McBREARTYWILLIAM J WILKINSON – THOMAS ABERYFROM RELATIVES, ALUMNI & STUDENTS"