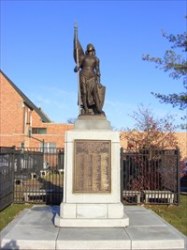 This monument lists the names of the boys of St. Peters parish in Mt. Clemens, MI. that served their country in The Great War from 1917-1918.World War I was a global war which took place primarily in Europe from 1914 to 1918. Over 40 million casualties resulted, including approximately 20 million military and civilian deaths. Over 60 million European soldiers were mobilized from 1914 to 1918.

World War I Monument/Joan of Arc (sculpture)
Is described as Full-length figure of Joan of Arc dressed in armor and standing in contrapposto (weight-bearing leg, proper right). She gazes towards sky. Proper right hand grips the pole of a flag or banner; proper left rests on the upper edge of a shield which is balanced upright, tip resting on the ground, behind bent proper left leg. Shield emblazoned with upright sword, pommel down, and crown, flanked by fleurs-de-lis. Figure wears a sword, belted to hips and slung behind legs. Between the feet, a spiked war club lies on the ground.
The statue is made from zinc or lead with a granite base.
Statue: approx. 8 x 2 x 2 ft. Base: approx. 8 1/2 x 11 3/4 x 11 3/4 ft.

An inscription of Deprato Foundry Co. unsigned Founder's mark appears. Other than that there is a bronze plaque (SE Side) which reads;
This Monument erected to perpetuate the memory of the boys of St. Peter’s Parish. Mount Clemens, Mich who served their country in the world war 1917-1918
(then listed are 178 names, of which 5 died and 8 were wounded)