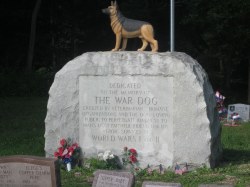 The War Dog - Military War Dogs have been fighting alongside our men and women in uniform in many of our conflicts. In WWI they were called Ambulance Dogs, they were trained to find wounded soldiers in No-Man’s land after a frontal attack. In WWII they were trained in many disciplines; scout, tracker, sentry and messenger. According to Military records War Dogs saved 15,000 lives during this conflict.

In Korea there were only one War Dog platoon deployed consisting of about 28 dogs. Of those 28 dogs on patrol, thousands of ambushes were averted. Thousands of lives were saved. In Vietnam further disciplines were added to their training; explosive detection and booby traps. According to the Military they saved 10,000 lives during this conflict. In Iraq their main function were detecting IED's. Their other duties were sentry and road side check points. They continue on duty today in Afghanistan. There are currently 600 teams deployed saving lives every day.