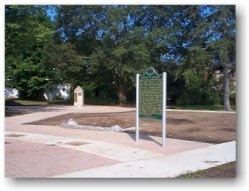 Joseph W. Guyton (1889 ~ 1918) lived most of his life near Evart, working as a farmer, plumber, and well driller. When the U.S. entered World War I inn 1917, Guyton was drafted into the army. He could have elected not to go since he was married and had a child, but instead he served with the 126th Infantry Regiment of the 32nd "Red Arrow Division". On May 24, 1918, shortly after reaching the front line in the Alsace region of what was then Germany, Guyton was the first American killed on German soil when he was hit by machine gun fire. France bestowed the  Croix De Guerre medal upon Guyton, as well as his unit to recognize their bravery in combat Guyton's comrades buried his remains in a churchyard. In 1921 the remains were returned to the United States and buried in Evart's Forest Hill Cemetery.

In 1918 when Private Joseph Guyton died during World War I, his fellow soldiers buried him in a German cemetery. In 1921 his remains and those of 5,212 other U.S. soldiers were returned home. At a memorial ceremony in Hoboken, New Jersey, President Warren Harding laid a wreath on Guyton's casket which represented all the war dead. Guyton's remains were given to his parents and daughter, his wife having died in the worldwide flu epidemic only months after him. Newspapers reported that 10,000 people attended Guyton's funeral in his hometown of Evart. Tributes include; Evart's Guyton Park, the Joseph W. Guyton American Legion post in Evart, the US-10 "Guyton" Bridge over the Muskegon River in Osceola County, and Guyton Elementary School in Detroit.