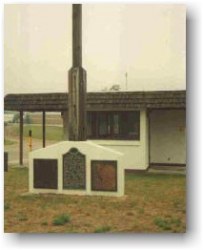 After American entry into World War I in 1917, President Woodrow Wilson ordered all of Michigan's National Guard to Camp Grayling. Eight thousand of these troops then went to Texas where they joined Wisconsin soldiers to form the 32nd Division. Arriving in France in 1918 the division earned the name "Red Arrow" for its swift assaults through German lines. During World War II the 32nd Red Arrow Division fought courageously in the Pacific Theatre and received a commendation from General Douglas MacArthur.