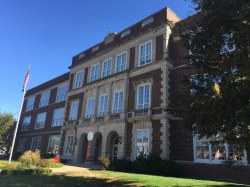 Originally named Liberty Memorial High School, it was completed in 1923 as a monument to the Lawrence High School students and graduates whose died in service during World War I. Of the 300 Lawrence youth who served, 144 hadn't yet graduated from high school. This number includes the two high school girls who died while serving as nurses.

The auditorium of the school was planned as a memorial hall. It includes stained glass windows made in Belgium representing various regiments of some fallen students. The most striking image to me is the large inscription of a Rudyard Kipling poem, adorning the wall over the stage. All that they had they gave - they gave - in sure and single faith. There can be no knowledge reach the grave To make them grudge their death Save only they understood That, after all was done We the redeemed denied their blood And mocked the gains it won.

All student assemblies, plays, concerts, etc are held in this auditorium. My own children attended middle school here, and it was always a sobering reminder of the children who were lost in service.

Detecting your location...
No information to be displayed !
Lori