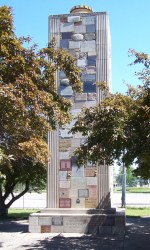 "We trust that this memorial, when completed, will serve as a constant reminder to the youth of Michigan
and the nation that this nation shall never perish from the face of the earth!"
Dr. Linwood Snow, General Manager of the Michigan State Fair, August 2, 1939
at the laying of the cornerstone for the Michigan War Veterans Memorial.

On September 10, 1939, nine days after Germany's invasion of Poland and the start of what would become World War II, the Michigan War Veterans Memorial was dedicated during a ceremony attended by 5,000 people, who were mostly veterans of the Great War and their families.

The Memorial was designed to honor Michigan's military veterans of all wars and conflicts and was dedicated "to the memory of those living or dead, who served their flag and country so unstintingly". Its four sides contain about 250 stones identifying various veterans organizations from all across the state of Michigan. Represented were organizations consisting of veterans of the Civil War, the Spanish-American War, the Great War and the Allied intervention in North Russia of 1918-1919. A full list of the contributors of the stones can be found here.

Michigan's Secretary of State, Harry F. Kelly, was the main speaker during the dedication ceremony and the eternal flame on top of the memorial was lit by Augustus F. Chappell, who was commander of the Michigan Department of the GAR.

This unique Memorial is located at the northeast corner of Woodward and State Fair Avenues in Detroit, MI. For many years, the Memorial was the scene of the annual "Veteran's Day" activities of the Michigan State Fair. More information about the history of the Memorial can be found here.

Over the years, the Memorial has been sadly neglected and is now in need of significant structural and cosmetic restoration. The eternal flame's gas supply has been shut off for decades. The foundation is settling and some of the stones have fallen off. It has been estimated that it will take about $250,000 to restore the Memorial to all its former glory.