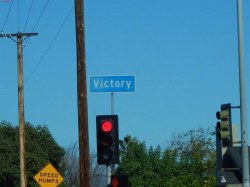 Probably the most used, lived on, and spoken of WWI memorial in Los Angeles...that very few are aware is a memorial.

As the LA Times article from 1924 trumpets "Victory Boulevard finds its name in a practical memorial to the soldiery of our country." This was a major thoroughfare in those early Valley days. It was even referred to as a "highway" and the LAT called other Victory memorial roads elsewhere "insignificant in comparison."

Victory boulevard begins in Glendale, CA and runs across the San Fernando Valley ending 22.5 miles later at the headland of a large park in Woodland Hills.

Naming roads and bridges after the war was not unique to our city. Streets termed "Avenue of the Allies", and thoroughfares named Pershing, or Foch are not uncommon across the USA. Like our Victory Boulevard, few remember the reason behind their designations.