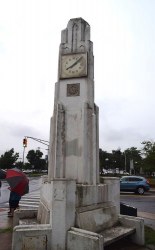 The stone obelisk sits on a triangular concrete base, each side of which is elaborated with a concrete bench.  The base’s three corners are marked by square pylons that project above the base.  The obelisk is square in cross section and is given vertical emphasis by paired marble arrows placed near each corner.  These arrows extend up to the lower portion of the second stage of the monument.  This stage has two brass plaques each inscribed with a shield.  The plaques are mounted beneath a clock on the front and rear faces of the monument.  The two clocks contain the letters for “New Brunswick” in place of the numbers on their faces.  The monument terminates with a flat top given vertical emphasis by several marble arrow moldings.

The monument also includes a concrete signboard just east of the monument, however in 2016, it was lacking its sign.