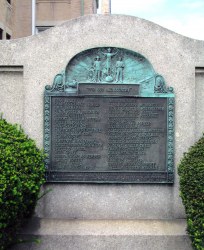 This World War I granite memorial sits on the lawn of North Bergen’s Municipal building.  It consists of a slab base with a canted top.  The face of the monument is a thick granite slab with a rounded top, flanked by wings extending to either side to form capstones for battered flanking piers.  Mounted to the center of the slab is a bronze plaque honor roll with vertical oak leaf edges, and an elaborate half-oval pediment flanked by scroll work.

The half-oval pediment contains a bas-relief depiction of Liberty standing on an orb of the world, her arms outstretched, holding a garland behind her.  She is flanked by a soldier and a sailor.  The rays of a rising sun over the ocean radiate behind the figures outward.  Other elements include an airplane at lower right and a tank at lower left.  A gun carriage with a cannon sits behind the soldier.  A scroll legend at the top of the pediment reads, “Roll of Honor.”

The figures stand above a platform that reads, “For God and Country.”  The honor roll lists the names of 38 North Bergen residents who fought in the war.