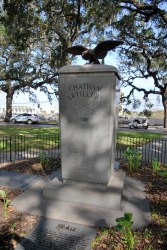 This memorial was dedicated in May of 1986 to honor the members of the Chatham Artillery, a Savannah military unit formed in 1786.

Inscription: “Dedicated May 4, 1986 - To Honor the Members of the Chatham Artillery - Servants of God, Country, State, and Community - Soldiers in War - Patriots in Peace”

“June 1917 Federalized for WW1.  Training at Fort McPherson and Camp Wheeler.  As part of the (?)st Division In July 1918 Were Sent to Camp Jackson S.C. And Then To France For Combat Duty With the Allied Forces."