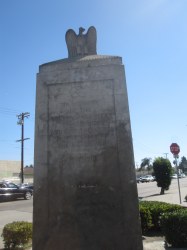 World War Memorial in the Mid-City (ish) area of Los Angeles at the southwest corner of Adams and La Brea on a traffic island. From the street, it's mostly hidden by a metro stop girder. Originally erected in 1936 by the now defunct, Greayer Clover American Legion Post. Inscription reads:

Sometime after '45 it was obviously rededicated, but no one seems to know when.

This traffic island was referred to as "Memorial Isle" in the LA Times Archives, and there would be small services there every Memorial and Armistice/Veterans Days. Surrounding patrons used to send the American Legion flowers to display The dirt (which seems to be gone...the, what I assume was, nice top soil is now just a rough grain of sandy stuff) was donated from "US Veterans cemeteries around the world", - we are unsure if these were from ABMC run cemeteries or part of the National Cemetery system.