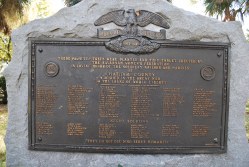 "The Base of this Tablet was given by Chatham Post 36 - American Legion - April 26, 1929 - In Memory of their Comrades who Fell During the World War”

“They Do Not Die Who Serve Humanity”