WASHINGTON, December 21, 2014 – The World War One Centennial Commission announces that, with the President's signature on December 20th, 2014, of the FY 2015 National Defense Authorization Act, H.R. 4435, the United States government has officially approved redevelopment of Pershing Park in Washington, D.C., designating it as the National World War One Memorial. The U.S. Congress and U.S. Senate approved the legislation last week, and sent it to the White House on December 12th. 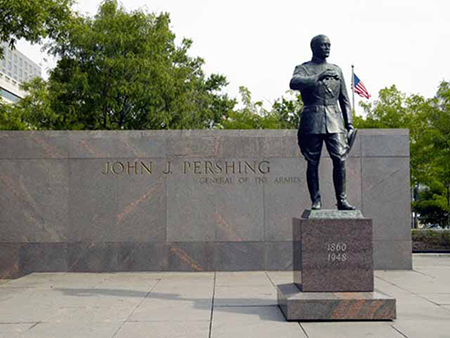 Pershing Park, located on Pennsylvania Avenue one block from the White House in front of the Willard Hotel, currently contains a statue of General John J. Pershing, leader of the American Expeditionary Forces (AEF) in World War One. This expansion of the Pershing memorial to a national--‐level memorial will complete the quartet of national memorials in Washington to the four great wars of "the American Century" – World War One, World War Two, Korea, and Vietnam. This new World War One Memorial will be designed to honor the 4.7 million Americans who served in U.S. armed forces during the war, and the millions more who served at home and in civilian capacities,

The Commission did not pursue earlier proposals to establish a new memorial on the National Mall, or to expand the District of Columbia War Memorial on the Mall into a national memorial. Because the Commemorative Works Act prohibits any new memorials on the Mall, the Commission chose to recommend to Congress that Pershing Park be redeveloped as the national World War One memorial in Washington.

Rep. Emanuel Cleaver (D-Mo.), Rep. Ted Poe (R-Texas) and Sen. Claire McCaskill (D-Mo.) were the lead sponsors of the legislation. Congressman Cleaver originally spearheaded legislation to establish the U.S World War One Centennial Commission during the 112th Congress, and has led the years-long effort to get the appropriate memorials to honor American sacrifice during World War One.

"With these memorials, the country will honor the service and sacrifice of American servicemen and women in the Great War in a manner commensurate with the memorials to our veterans of the later wars of the 20th century," said Commission Chairman Colonel Robert J. Dalessandro, USA (Ret.). "The centennial of World War One, which began this year, provides a timely and essential opportunity to remember that service, and the memorial will encourage greater education of the American people about our most forgotten war."

"Pennsylvania Avenue is the most prominent boulevard in the Nation's capital, and Pershing Park, located one block from the White House and with a commanding view of Capitol Hill, is a fitting location for the country's tribute to its World War One veterans," Dalessandro said.

The Commission will sponsor a privately funded design competition for the memorial. Under the legislation, "no federal funds may be obligated or expended for the designation, establishment, or enhancement of a memorial or commemorative work by the World War One Centennial Commission." The Commission hopes to dedicate the new memorial by November 11, 2018, the 100th anniversary of the armistice that ended the war. 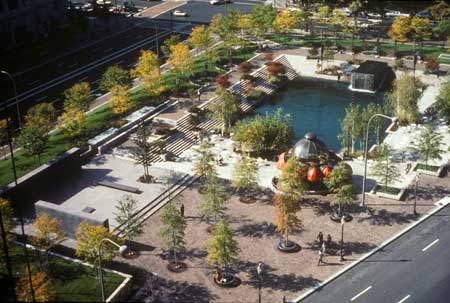 About World War One: World War One was fought between July 28, 1914, and November 11, 1918. Sixteen million combatants and civilians lost their lives. The United States entered the war on April 6, 1917. While the first American fatalities in the war occurred November 3, 1917, the most intense period of American fighting along the Western Front occurred from late May to November 11, 1918. More than 116,000 American soldiers and sailors died during the war – more than in Korea and Vietnam combined.

About the World War One Centennial Commission: The Commission was created by the U.S. Congress in January 2013 by Public Law 112–272. Its twelve members are appointed by the President, the majority and minority leaders of the Senate and the House of Representatives, the American Legion and the Veterans of Foreign Wars, and the National World War One Museum in Kansas City. The Commission's mission is to educate the people of the United States about the history of World War One, the United States' involvement in that war, and the war's effects on the remainder of the 20th century, and to commemorate and honor the participation of the United States and its citizens in the war. For more information, visit our website at www.worldwar1centennial.org. 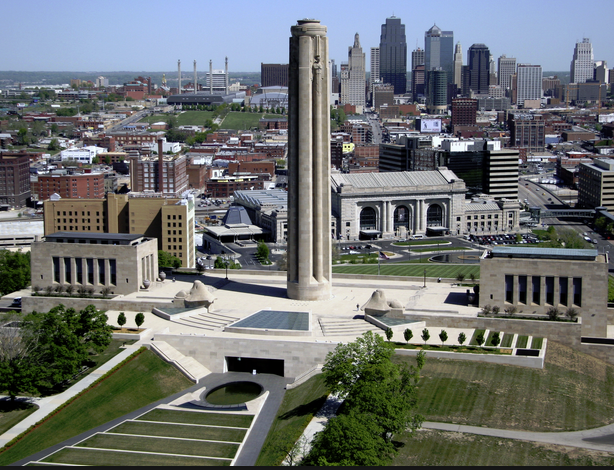 About the National World War One Museum at Liberty Memorial: The National World War One Museum at Liberty Memorial is the only American museum solely dedicated to examining the personal experiences of a war whose impact still echoes in the world today. The Museum holds the most diverse collection of World War One objects and documents in the world and is the second--‐ oldest public museum dedicated to preserving the objects, history and experiences of the war. The Museum takes visitors of all ages on an epic journey through a transformative period and shares deeply personal stories of courage, honor, patriotism and sacrifice. Designated by Congress as America's official World War One Museum and Memorial, it is located in downtown Kansas City, Mo., and inspires thought, dialogue and learning to make the experiences of the Great War era meaningful and relevant for present and future generations. To learn more, visit www.theworldwar.org.