The European Powers and Alliances in 1914 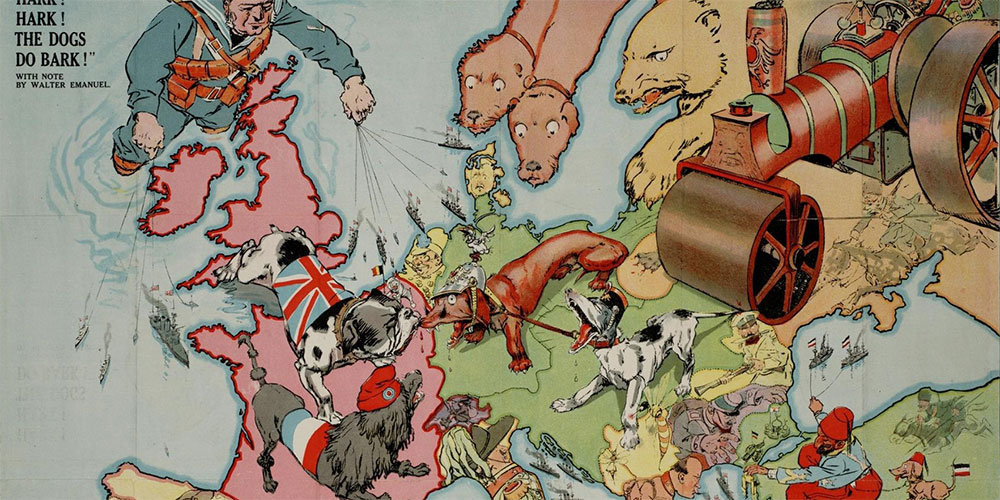 Great Britain was near the height of its strength. It was the center of world finance, a top industrial nation, and it ruled over nearly a quarter of the world’s inhabitants. Britain’s island geography allowed it to avoid long term alliances (although it did guarantee Belgium’s neutrality). It had a small army, but a dominant navy.

France had historically been Europe’s strongest nation, but had suffered a humiliating defeat to Germany in 1870-71. Germany worked to keep it isolated and prevent it from regaining its old prominence. France still remained a major power, and had colonies around the world, especially in North Africa and Asia.

Germany had been formed in 1871 by the unification of smaller German-speaking states. It had rapidly transformed into one of the world’s leading industrial countries, with its own colonial empire and a growing navy. Many Germans believed that their young nation was destined to re-energize western civilization, which created friction with the more established powers.

Italy had also come together as a nation relatively recently. However, it had not made the same progress, and had struggled to build a colonial empire. It was also frustrated that many ethnic Italians were under Austro-Hungarian rule to the north.

Austria-Hungary was a large but declining power, held together by a peculiar “dual monarchy”: one ruler with two co-governments. To complicate things further, it was home to large ethnic populations, especially in Bosnia, Croatia and its other Balkan provinces.

Russia was considered backwards, but still formidable. The world had been shocked when it had lost to a non-European power in the Russo-Japanese War in 1905. However, it remained a force to be reckoned with, due to its vast resources and population, and its claim to be defender of all Slavic peoples in Europe.

The Ottoman Empire (Turkey) once ruled the Middle East and North Africa, as well as much of Eastern Europe. By 1914, it had been pushed out of Europe, and had lost North Africa to various European nations. Yet it was still a sizable power, and it held an important strategic position, straddling Europe and Asia.

In the years before 1914, Europe's system of alliances shifted into its final pre-war form. Germany and Austria-Hungary had been close for a half century. Each agreed to support the other in case of war. The addition of Italy (despite its tensions with Austria-Hungary) formed the Triple Alliance.

On the other side, France broke its isolation by allying with Russia. Russia had been close with Germany, but had grown suspicious of its motives. Germany’s expanding power and growing navy also led Britain to break with tradition and align with its old rival, France, and with Russia, forming the Triple Entente.

The Ottoman Empire remained neutral, although it leaned toward Germany. At the same time, the nations in both coalitions had other agreements with lesser powers. Two of these -- Serbia and Belgium -- would play key roles in the outbreak of the upcoming war.

By 1914, Europe’s nations were so interconnected and intertwined that it was inevitable that a conflict between two powers would pull in one nation after another until the entire continent was at war. 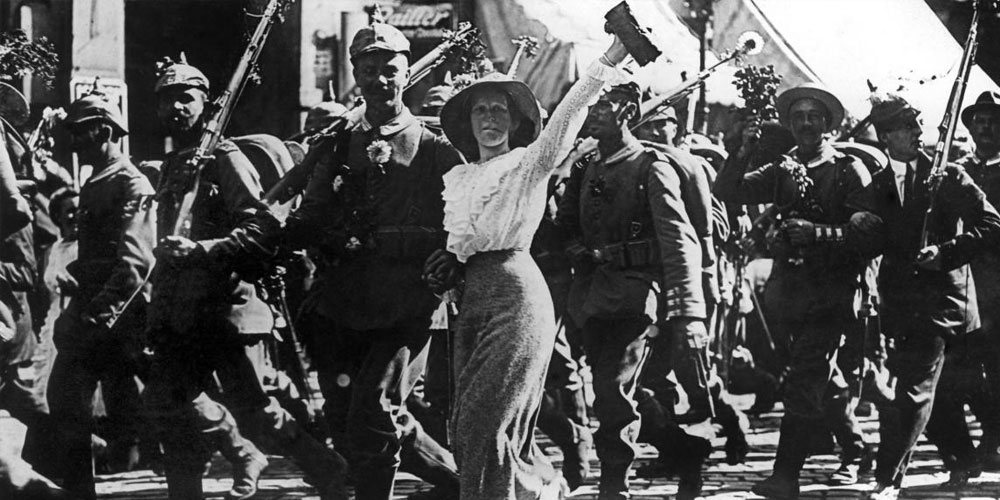 On June 28, 1914, a young man of Serbian descent named Gavrilo Princip assassinated Archduke Franz Ferdinand, heir to the Austro-Hungarian Empire, in Sarajevo, Bosnia. The shooting triggered the terms of one alliance after another, bringing in nearly every European power and setting in motion their long-standing, rigid war plans. Aggressive posturing by national leaders and widespread public support for war quickly escalated the situation into a continent-wide conflict.

The assassin Princip was part of a Bosnian Serb independence movement. Austria-Hungary blamed Serbia for the shooting, but knew that Russia would support its fellow Slavic nation. First it secured Germany’s backing in case Russia intervened, and then it issued a series of demands to the Serbian government.

Germany’s involvement escalated the situation to a continent-wide crisis. Germany assumed the alliance between France and Russia would force it to fight on two battlefronts. Its war plan (the Schlieffen Plan) therefore called for an overwhelming invasion to quickly defeat France before turning to deal with Russia’s massive but slow-moving army. In order to strike France, Germany had to go through Belgium, which would bring in Britain to defend Belgium’s neutrality.

Although Serbia accepted nearly all of Austria-Hungary’s demands, Austria-Hungary declared war on July 28.As the crisis deepened, other nations activated their war plans. Huge crowds in cities across Europe demonstrated broad public support for war. The war plans took on a life of their own, despite the efforts of diplomats and even after a change of heart by Germany’s Kaiser Wilhelm. Military leaders insisted that the forward momentum of millions of troops and thousands of tons of supplies could not be halted.

Europe and the World in the 19th Century 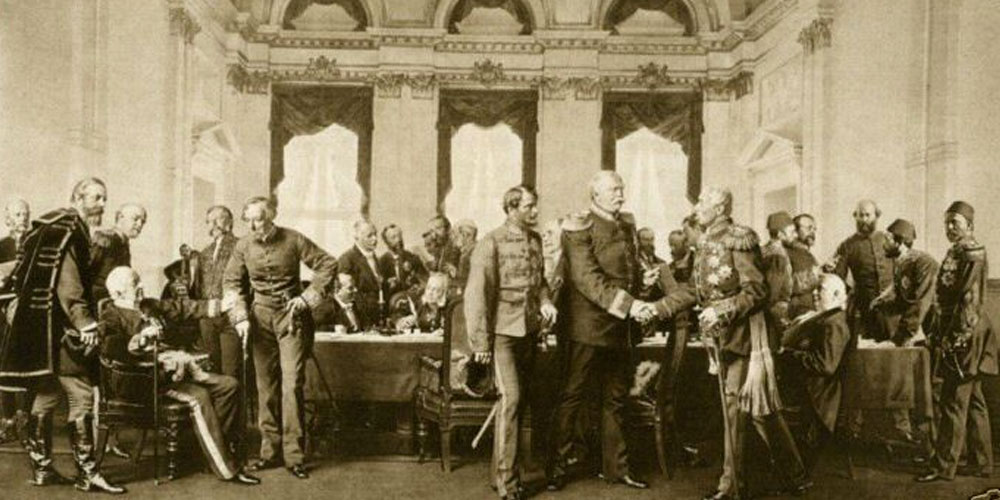 In the century before World War One, Europe experienced an era of relative peace and prosperity. From 1815 - 1914, European nations used alliances to maintain the balance of power, so that no single country could become too powerful. A number of wars were fought during this period, but these were limited in scale. New powers arose (Germany, Italy) while older ones faded (Ottoman Empire, Austria-Hungary), but overall, there was a sense of stability.

However, powerful forces were developing that would push Europe’s nations into a major conflict that would ultimately draw in much of the world. Industrialization increased the capacity of nations to produce the tools of war on a mass scale. Thanks to advances in medicine, food cultivation and transportation, the population of Europe tripled, expanding the manpower pool available for military service. Nationalism was on the rise, driven in the larger nations by competition for overseas colonies. In addition, minority populations within the larger powers (especially Austria Hungary and the Ottoman Empire) increasingly demanded the right to govern themselves. The system of alliances between the larger nations expanded to include additional agreements between major powers and lesser nations.

Thus, by 1914 every major European power possessed a growing industrial economy and the ability to field a massive army of willing patriots, and was connected to a web of obligations and guarantees that entangled nearly every country in Europe.

Over the course of the 19th century, much of the world came under European rule. Competition for colonies greatly accelerated, driven by the need for both raw materials and markets to feed Europe’s growing industrial economies. With the exception of the United States, Central and South America, the Ottoman Empire and Japan, most of the Earth’s population was under the control of a European power. When war came, territories in every corner of the globe would send manpower and resources to Europe, or would themselves become battlegrounds. 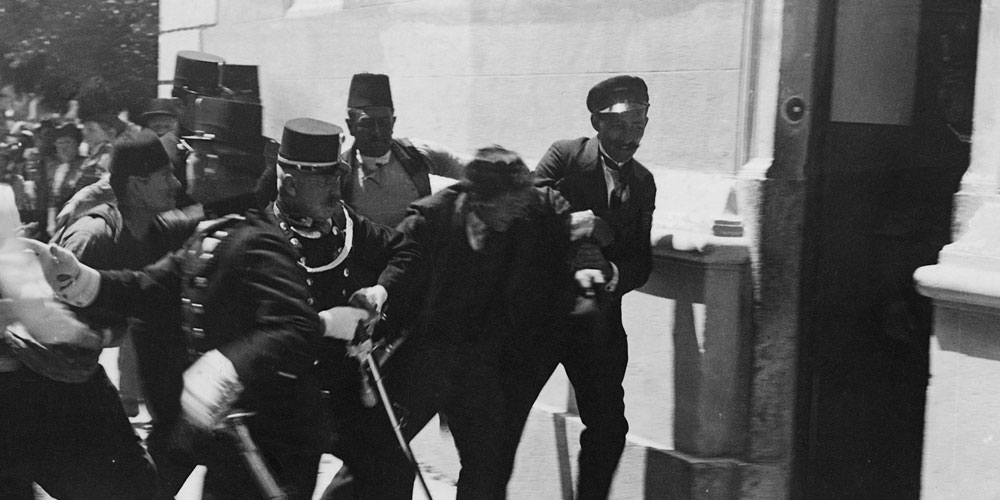 ON JUNE 28, 1914, a young Bosnian Serb named Gavrilo Princip shot and killed Archduke Franz Ferdinand, heir to the throne of Austria-Hungary, in Sarajevo, Bosnia. The assassination set off a chain of events that led to the start of World War I.