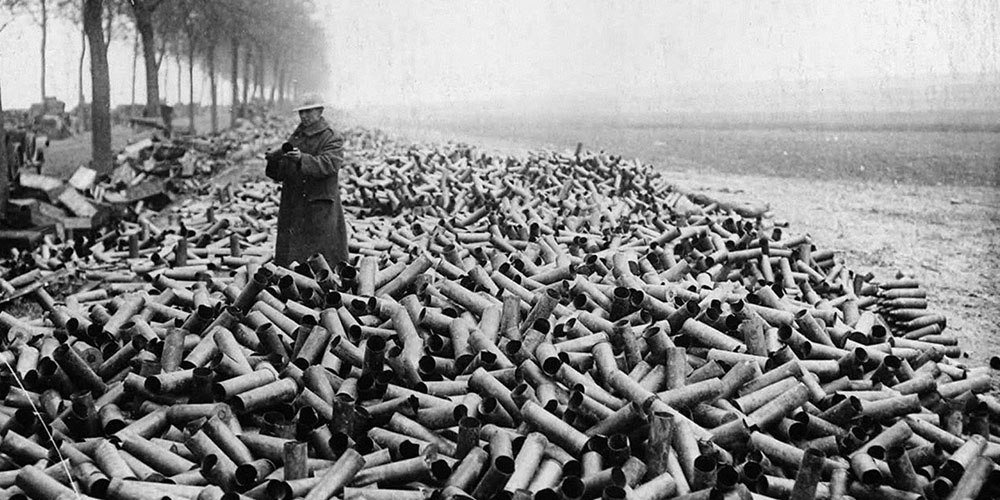 The war’s third year was consumed by two giant offensives, one German, one Allied.These titanic battles involved millions of men and raged for months, but resolved nothing.

Germany planned to draw the French into an enormous, grinding battle that would drain them of men and supplies.They launched this effort in February by attacking at Verdun.For the next ten months, the armies threw millions of men and countless tons of firepower at each other. Momentum swung back and forth as the seasons changed.In the end, the Germans called off the attack.They had inflicted 370,000 casualties while suffering nearly the same number themselves, all for a gain of about three miles.The French had held on; by the standards of the war, this was counted as a victory.

The Battle of Somme was shorter, but even more violent and just as futile.The Somme was the first major action for the Britain’s new armies. On July 1, the first day of the battle, the attacking British suffered 57,000 casualties, with almost 20,000 deaths.Some units lost over 90% of their men in just minutes.As before, the attackers achieved initial success, but were unable to follow through to victory. Later in the battle, the British used tanks for the first time, but the new machines had little impact. The Allied attacks were finally halted in November by bad weather.In four and a half months they had advanced six miles, at a cost of over 600,000 casualties. German losses are uncertain, but they too were staggering: between 400-600,000 men.

The winter brought an end to a year of slaughter and futility.Yet without a clear winner, none of the combatants was ready to end to the war. Their horrific losses only stiffened their resolve to keep fighting.

Across the ocean, Americans followed the war in fascination and horror. Many sympathized with the Allies, but most were glad that the United States was far removed from the unspeakable state of affairs overseas.No one yet knew that events in early 1917 would force America to make a crucial decision.

1915: Digging in and Stalemate 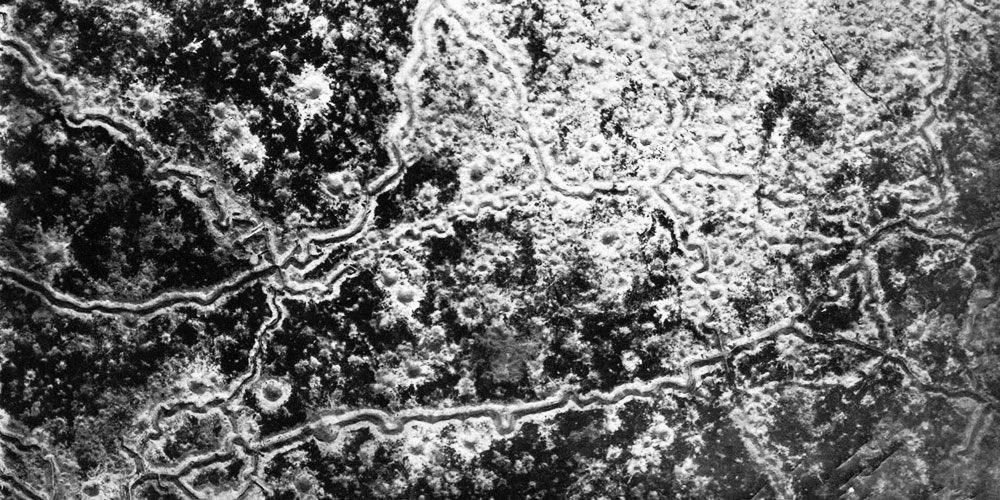 The war’s second year saw the front lines harden, along with the combatants’ resolve.Trench lines dug for the winter became permanent, while offensives throughout the year did little but add to the death toll. As the war consumed men and resources, both sides shifted their economies to full wartime production.

In January, U.S. President Woodrow Wilson offered to mediate peace talks.No one was interested; both sides were determined that their 1914 losses would not be in vain, and both believed they would win the war.

France launched a February offensive that achieved nothing, but cost 250,000 casualties.That same month, Germany began unrestricted submarine warfare, attacking all merchant ships in the waters around Great Britain without warning -- even those from neutral nations.The Germans responded to protests by pointing to Britain’s naval blockade and complaining of a double standard.

The combatants introduced new ways to inflict violence.The Germans introduced poison gas on the Western Front during the Battle of Ypres in April.InMay, German zeppelins (airships) over London carried out the first aerial bombing of civilians in history.

Over the course of the year, the French tried and failed to push the Germans out of their territory. The British built up a massive army to join the French in the front lines.The Germans held their ground while making progress on the Eastern Front.1915 closed with the Western Front locked in trench warfare and stalemate -- but with both sides confident of winning the war in 1916.

1914: Opening Battles - The Schlieffen Plan and the Race to the Sea 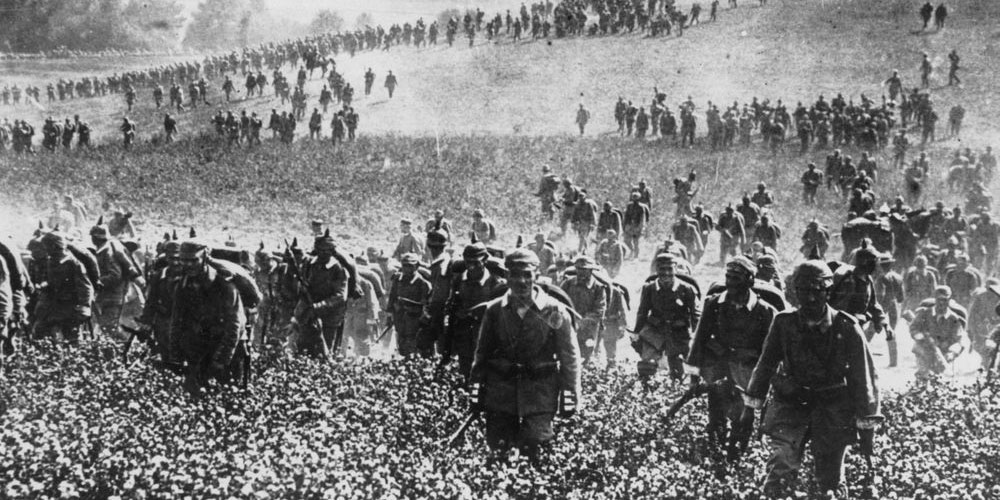 The war in Europe had been set off by Austria-Hungary and Serbia, but the conflict between these two nations was soon dwarfed by the fighting between their allies. In the east, Russia’s huge armies moved into Germany. In the west, German’s attack on France drew in Belgium and Great Britain. This struggle on the Western Front would eventually bring the United States into the conflict, but not until after three years of slaughter and futility.

Germany’s war plan, the Schlieffen Plan, called for it to quickly defeat France and then shift east to fight Russia. Its armies were to sweep down through Belgium and northern France toward Paris, like a giant swinging door. On August 4, Germany invaded Belgium, violating its neutrality. The British upheld their commitment to defend Belgium, and declared war on Germany.

However, all Britain could immediately do was to blockade Germany with its navy and to prepare its undersized army for battle. Belgian fought fiercely, but German forces quickly overwhelmed its tiny army and occupied much of the country. Germany’s aggression, and the harsh actions of its troops during the invasion and occupation, outraged the civilized world.

To the southeast, France opened the war by pushing into territory it had lost to Germany in their 1870 war. Tens of thousands of Frenchmen fell to German rifle and machine gun fire in wasteful attacks: 27,000 died on August 22 alone.

The Germans then began their sweep into France. The French armies, supported by the small British Expeditionary Force, could not hold them back. By early September, German troops were within sight of Paris. The Allies launched a desperate counterattack; the Battle of the Marne finally halted the German advance.

The Race to the Sea

For the next few weeks, each side tried to get around the northern end of the other’s lines, in a so-called “race to the sea”. Finally, both sides ran out of room to maneuver. By year’s end, the Allies and Germans faced each other along a continuous line that ran for 450 miles from the coast of Belgium, through northern France, down to the border of Switzerland. This line would remain essentially unchanged for over three years.

In less than five months, the armies on the Western Front had suffered nearly two million casualties, including half a million deaths. 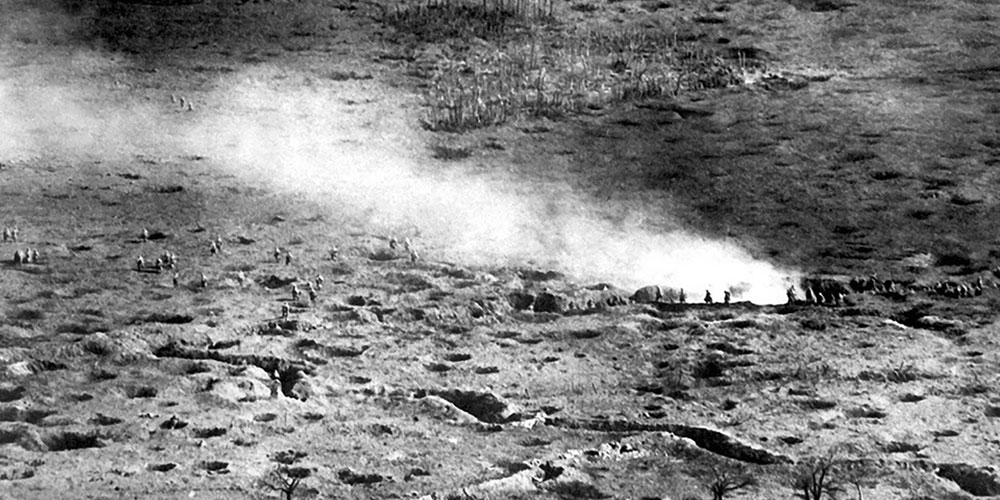 The war opened with massive, sweeping battles across the European landscape, but then bogged down into a bloody stalemate that lasted nearly three years.