The United States in the 19th Century 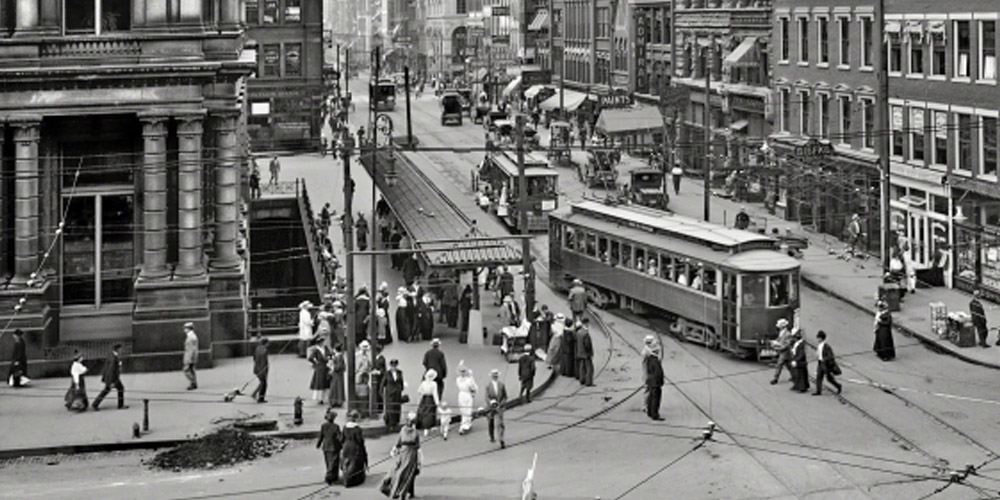 NOTE: The following summary focuses on context and background for World War I.

The United States began the 19th century as a new nation, little different from the original thirteen colonies along the east coast. Over the next hundred years, it vastly increased in size and population, and developed into the world’s largest agricultural and industrial economy. For most of this period, the U.S. focused on internal economic, political and social issues, but near the end of the century, it acquired overseas interests that involved it with international affairs.

In the first half of the century, the United States established itself as a viable nation and the dominant power in North America. The U.S. victory over the British in the War of 1812 firmly secured its independence. The Louisiana Purchase (1803) and victory in the Mexican American War (1846-48) expanded its territory across the continent. Protected by the Atlantic and Pacific Oceans, the U.S. avoided involvement in international politics. Through the Monroe Doctrine (1823), the U.S. claimed its status as the primary power in the Western Hemisphere while reaffirming its policy of remaining out of European affairs. During this period, the nation’s population grew rapidly, from 5 million in 1800 to 23 million by 1850.

The middle part of the century was dominated by debate and conflict over slavery, culminating in the American Civil War. The Union’s victory over the seceding states of the Confederacy ensured that the United States would continue as a single, unified nation. However, divisions and resentments between Northern and Southern states remained. Furthermore, although the Civil War ended slavery, black Americans were not integrated into American society, and were forced to embark on a struggle for equal rights and opportunities that continues to this day.

In the latter part of the century, the United States transformed from an inwardly-focused nation of small farmers and merchants to an industrial society with overseas interests.

Settlement and development of the West drove much of this economic growth. Military action and coercive treaties pushed American Indian tribes from their lands, opening up territory for settlement. Drawn by free land granted by the Homestead Acts, settlers cleared and cultivated millions of acres for farming. The discovery and development of oil fields and major metal deposits fueled industrial production. Innovations in manufacturing led factories to spring up in cities and towns across America. Railroads transported resources and goods throughout the country, and to coastal ports for overseas trade. The first modern corporations were formed from the consolidation of railroad, oil, and steel companies, and major banks arose to invest in the new industrial economy.

The U.S. population continued to grow, reaching over 90 million by 1910. This growth was fueled in part by a surge in immigration between 1880 and 1910. 17 million immigrants, attracted by the promise of free land and better wages, expanded the size of the American workforce while increasing the diversity of American society. At the same time, the expansion of industrial production and increased mechanization of farming led millions of Americans to move from the countryside into cities. In 1860 just one in five Americans lived in a city; by 1910, nearly half the population were city-dwellers.

Industrialization and urbanization came at a cost. Conditions in factories were dangerous and often unsanitary. The rapid, unplanned growth of cities resulted in unsafe and unhealthy living conditions in working class neighborhoods. Child labor was widespread. Immigrant laborers with limited English faced exploitation and discrimination. Political machines controlled cities through bribery and corruption. Unregulated corporations and banks created monopolies that controlled entire industries and were able to manipulate prices and wages.

The Progressive movement arose in response to these problems. Labor activists and unions fought for improved conditions, fairer wages, and shorter work weeks. Journalists exposed abuses and corruption by politicians and corporations. Legislatures passed laws restricting child labor and creating new schools and compulsory education. Other legislation regulated the activities of corporations and banks. The Women’s Suffrage movement gained new momentum thanks to a series of victories that gave women the vote in many western states. The era marked the beginning of broader government intervention on behalf of American citizens.

Near very end of the 19th century, the United States acquired significant overseas interests for the first time. Its victory over Spain in the Spanish-American War (1898) gave it control of nearby Cuba and Puerto Rico as well as the far-off Philippine Islands and Guam. These acquisitions spurred the U.S. to annex Hawaii, American Samoa, and other Pacific Islands in order to support its new possessions.

Thus, by 1914, the United States was the world’s leading agricultural producer and industrial power. Its population was larger than any European nation except Russia. Most Americans remained hesitant to become involved in international issues. However, the nation’s multicultural population, increased trade and financial ties with Europe, and new overseas territories made it more connected than ever before to global affairs.