Call to Arms: The Draft and Training 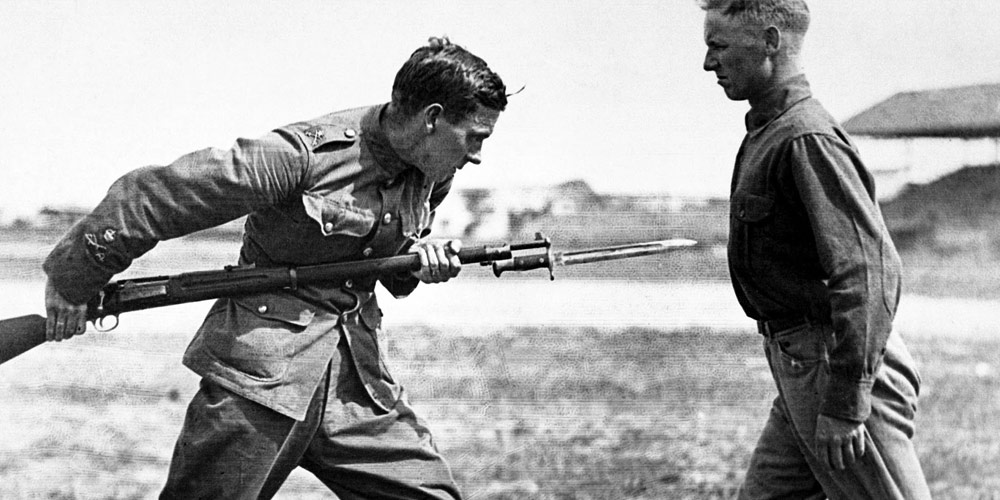 The United States was not prepared to fight in World War I. It had a respectable navy, but the war was primarily fought by armies on land, not fleets at sea. America’s army was tiny and designed to do little more than guard its borders. At a time when European armies numbered millions of soldiers, the U.S. Army, National Guard, and Marine Corps had barely 300,000 men combined.

Initially, recruitment was slow, reflecting the uncertainty the public still felt about the war. To rapidly raise a large fighting force, Congress passed the Selective Service Act (commonly known as “the Draft”) to conscript men into the Army.

All men aged 21-31 were required to register with a local draft board, and were each assigned a draft number from 1 to 10,500. They were inducted into service based on the order in which their number was selected at a drawing held by the Secretary of War.

The draft was not universally accepted. Groups and individuals raised political, legal, or moral questions. Members of certain religious faiths were given exemptions as conscientious objectors. Alvin York, perhaps the most famous U.S. soldier of the war, initially registered as a conscientious objector before deciding to serve.

However, most Americans saw it as their duty to serve their nation; over 2.7 million men would be drafted into the military.

Throughout 1917 and 1918, men arrived at training camps from all corners of America. The average Army trainee would receive six months of training in the United States before shipping overseas.

Trainees were taught to drill, follow orders, and work as a team. They learned how to handle weapons and the tools of war, while building their physical fitness through marching and exercise.

The Army also worked to create a unified force from a diverse, disparate manpower pool. With the notable exception of African American troops, it largely succeeded. It made a special effort to integrate hundreds of thousands of immigrant solders, by teaching them English and instilling a sense of “being American” while taking into account their unique cultural backgrounds. Meanwhile, as the nation’s young men actively prepared to go overseas, the public’s support for the war effort grew.

As troops completed their training, they boarded trains and traveled to the East Coast. Soldiers from Northern and Southern states came together, joined by men from the Western states, in America’s first great national effort since the Civil War. They embarked on troop ships and steamed off to the war zone. Four out of five would travel through New York Harbor, passing under the gaze of the Statue of Liberty. For many, this would be the last view of their country that they would ever see.