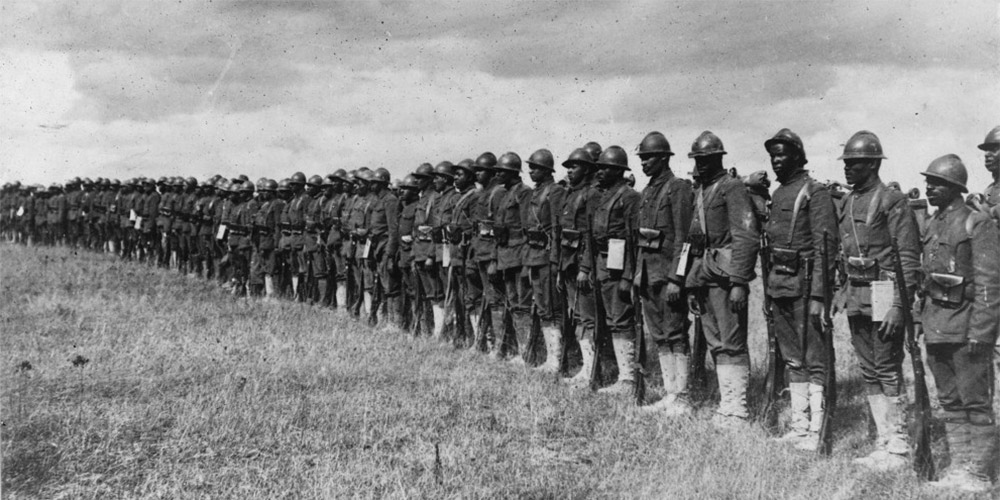 More than 350,000 African Americans served during World War I. Many were assigned menial support roles, due to American society’s deep fears and prejudices. Despite facing racism at home and in uniform, tens of thousands of black soldiers served courageously and capably in combat.

When war broke out, black Americans debated whether or not to support the war effort if the U.S. joined the fighting. Some questioned why they should help the U.S. defend democracy overseas, when they were denied its full benefits at home.

When war came, many African-Americans chose to prove their right to equality by serving their country. African American troops were organized into segregated units, mostly led by white officers. In response to protests, the Army eventually trained over 1,300 black officers.

200,000 black troops shipped overseas. Many white commanders believed black soldiers would perform poorly under fire. Others feared that black combat veterans would be emboldened to resist racism when they returned home. As a result, most African Americans were assigned to labor duties in the rear areas.

General Pershing intended to train and raise an independent American army, and resisted British and French requests for U.S. troops. However, he agreed to send the French several African-American regiments from the 93rd Division.

Under French command, black troops experienced far less racism. They were given combat assignments like any other French unit, and fought with courage and skill.

The most famous of these was the 369th Infantry Regiment. Although it was also known for its famed regimental band, which brought jazz to Europe, it was first and foremost a fighting unit. During the Meuse-Argonne offensive at the end of the war, the 92nd “Buffalo Soldiers” Division joined the fighting, serving under U.S. command. In addition, a small number of African-American women served as nurses and in the Navy.

Unfortunately, the service of black Americans had little impact on racism in the United States. Many African-American veterans faced discrimination and violence, despite their service. However, their record provided undeniable proof of the willingness and ability of African Americans to serve their nation, and further inspired the black community in its fight to achieve social and political equality.