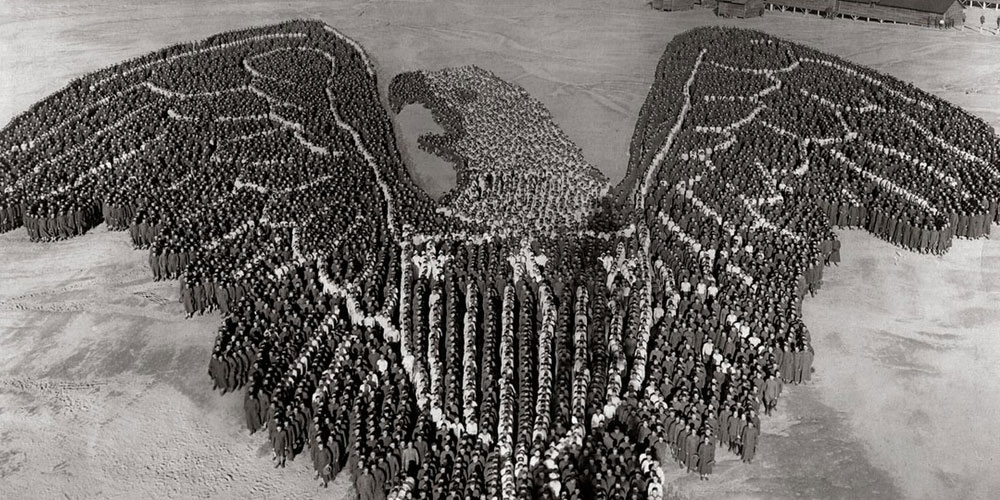 During World War I, nearly forty percent of U.S. soldiers were immigrants or children of immigrants. Their service not only helped win the war, but accelerated the assimilation and acceptance of an entire generation of new Americans.

Between 1880 and 1910, 17 million immigrants arrived in the United States. By 1910, almost 15 percent of the population was foreign born. While earlier arrivals were largely British, Irish or German, most of these recent immigrants were from Eastern, Central and Southern Europe. A smaller number came from Asian countries. Their arrival increased the U.S. population while introducing unfamiliar languages and cultures into American society.

The outbreak of World War I in July 1914 led to concerns about how the immigrant population would react to the war, since most recent arrivals had direct ties to countries involved in the fighting. These concerns deepened when the United States entered the war in April 1917. Many native-born Americans were prejudiced against mmigrants, seeing them as lazy, backwards, and cowardly. Some questioned whether immigrant recruits who spoke little English and held old-world values could be trained to be effective soldiers.

Initially, it appeared that the skeptics were right. When the first foreign-born recruits and draftees began military training, many struggled to understand simple orders. Some had trouble keeping up physically, due to years of poor nutrition and hard labor. Misunderstandings and prejudices flared up into arguments and fights, some of them serious.

The army moved quickly to address these problems. Foreign recruits were organized into training units by language, led by multilingual officers. Resources were provided for traditional celebrations and religious services, and ethnic foods were served at mealtime. At the same time, immigrants received intensive classes in English, American history and civics.

These measures improved the morale and performance of foreign-born recruits, which helped them earn the respect of their native-born comrades. By the time their units were sent overseas, immigrant soldiers had begun to develop deeper ties to their fellow soldiers and to their adopted nation.

On the battlefield, immigrant and native-born troops toiled, fought, bled and died alongside each other. Under fire, prejudices and stereotypes were irrelevant; all that mattered was whether a man was a good soldier. The shared hardship and sacrifice forged bonds between troops of all backgrounds and reinforced their pride in serving under the stars and stripes.

Back home, the families of foreign-born soldiers were deeply invested in the war. They bought war bonds and proudly hung blue star service flags in their front windows to show that they had a loved one in uniform.

During and after the war, the U.S. government enacted new restrictions on immigration. However, by sending their young men overseas and demonstrating their support for the war effort, immigrant communities in the U.S. were better able to connect to mainstream American society.