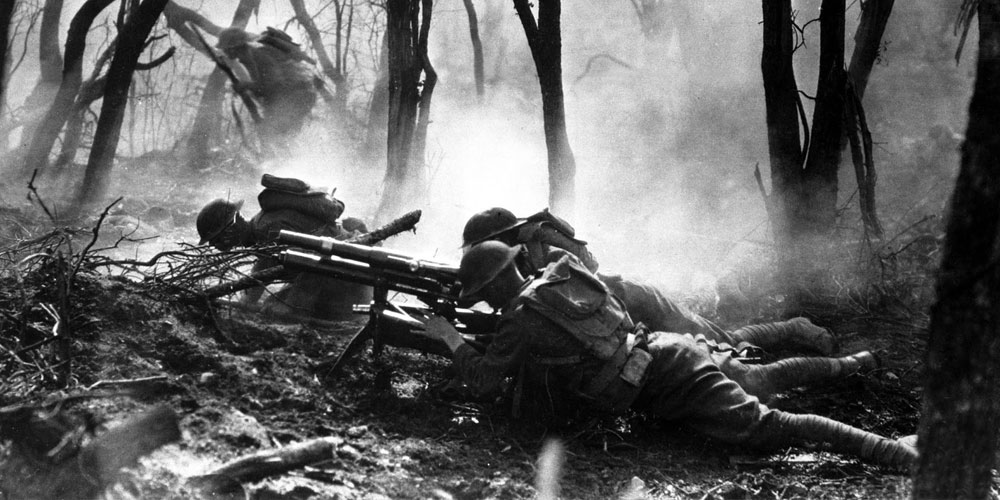 The American Expeditionary Force had planned to build up and then go on the attack in 1919. Germany’s Spring Offensives in early 1918 forced U.S. troops into the line sooner. Their impressive performance led to the formation of the First U.S. Army, and gave Allied leaders the confidence to press forward against the drained and demoralized Germans.

The Allies initial task was to push back the advances the German attacks had made in their lines. In August, American units supported Allied offensives in the Somme, Oise-Aisne, and Ypre-Lys areas. These drives reclaimed the territory captured by the Germans, and pushed the Germans back towards their defensive positions at the Hindenburg Line.

On September 12, the Americans launched their first offensive at St. Mihiel, supported by French troops, artillery, airplanes and tanks. Thanks to Pershing’s careful planning and the aggressive leadership of field commanders, the assault moved forward rapidly, disrupting a planned German withdrawal.The attack’s objectives were quickly achieved, and Pershing halted to organize his forces for the next effort.

On September 26, the Allies launched offensives all along the Western Front, in what would become known as the Hundred Days Offensives. The AEF had the task of attacking between the Meuse River and the western edge of the Argonne Forest. This area was heavily defended, and complicated by difficult terrain. But Pershing believed that if his troops could push forward with enough momentum, they could break into the open areas behind the German lines. The Meuse-Argonne Offensive would involve 1.2 million American troops, making it the largest battle in U.S. history.

The offensive opened with an enormous artillery barrage. In three hours, the Allies used more ammunition than both the North and South had fired in the entire Civil War. The American attack made good progress at first, piercing two out of three German defensive lines. But logistical problems and the inexperience of some attacking units stalled the assault in front of the third German line. Experienced troops took the lead, and began a steady push through the German fortifications. The area was finally cleared by October 31.

The Allied pressure all along the Western Front was accompanied by success on other battlefronts. Germany’s ally Bulgaria was knocked out of the war in late September, followed by Ottoman Turkey at the end of October.

On November 1, American forces once again moved forward. They easily broke through the German lines and advanced rapidly. On November 4, Austria-Hungary gave up. Germany stood alone. The Allied victory was all but complete, yet the troops in the field continued to fight and die while their leaders negotiated an end to the war.