The Lost Battalion Survivors Association was set up officially in September, 1938 though members of the Lost Battalion had been meeting unofficially for years before. The group formed originally to greet the publication of Thomas Johnson and Fletcher Pratt's new book The Lost Battalion, which many of the men who had been there in the Charlevaux Ravin had contributed to. 200 'survivors edition' copies, signed by both authors, were produced and handed out by Johnson and Pratt to those who had contributed the most. This work was considered a major triumph for the men and became THE book on the subject for decades, though many of the men were far from happy with the results. (Many considered large sections of the book to be at best a work of supposition and at worst pure B.S.) Nevertheless, James Larney (who had been Whittlesey's signalman), and Walter Baldwin (who had been in charge of Whittlesey's runners and later became 1st Battalion Sergeant-Major), together with George McMurtry formed the organization that summer and the first official meeting was held at the Hotel Shelboure in New York with the release of the book the major focal point of the meeting. Baldwin became chairman of the organization for life, Larney became secretary for life, and McMurtry underwrote the entire thing each year out of pocket (no matter the expense, no questions asked) until his death in 1958, when his estate continued the payments for another 10 years. From 1938 on, each year the organization sponsored a luncheon and drinks far into the evening at one of several fine hotels in New York and survivors from all over the country had an open invitation to attend. Baldwin and Larney, however, went to great lengths to 'vet' those men who claimed they were there in 1918 and consequently there was a strict admission policy to the group to proven survivors only and honorary members who had to be voted in. A smaller West Coast version of the organization was set up in California by Nelson Holderman as well, with Leo Stromee acting as chairman and secretary, but it was never as big or successful as the original New York version.

Luncheons followed the same format each year and were held in either late September of early October on a Saturday. 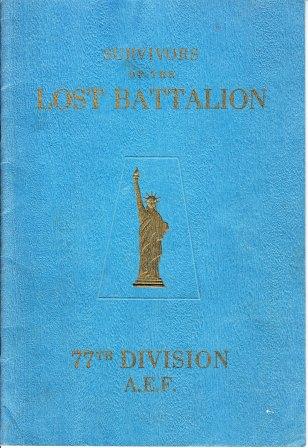 The hall chosen was always set up the same, with the tables being arranged in a large 'U' configuration with McMurtry at the center of the head table. In the middle of the U would be placed a stool or chair on which would be arranged a bouquet of Dahlias, sent every year by the former fiance of Marshall Peabody, one of the Lieutenants from the 306th Machine Gun Battalion who had been killed in the Pocket. The bar opened at 11:00 am and men would begin wandering in and congregating almost immediately. There was usually much camaraderie and the atmosphere was quite jolly. Most of the talk concerned families and lives since the last reunion or since the last time men had seen each other, which in some cases might not have been since war, though the war and the events in the Pocket were mentioned in conversation, (they could hardly not be). And while the reunions were popular events in the men's lives, with many who could not attend sending letters of 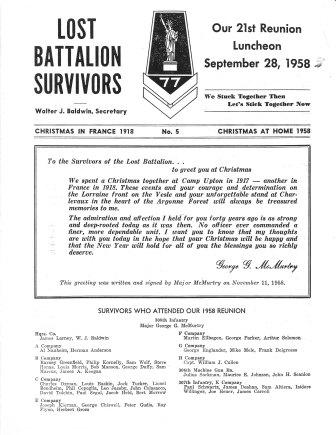 greeting in their stead, at no time did a reunion ever have more than 100 men attend, and it was usually the same men over and over again. Still, there was an award given out for the man who had traveled the greatest distance and a newsletter was printed afterwards that was sent out that following Christmas. Baldwin and Larney also made available a professionally printed booklet listing all the men on their 'official' list and kept up with who had passed on during that previous year. There was usually a reporter or two skulking around who was allowed in and it was almost always they who asked the questions that brought up the war in detail. However one survivor summed it up the general feeling about the old stories: "To tell you the truth," he said, "we had the subject talked to death years ago."

Just before 1:00 pm the men would gather in the hall and take their assigned 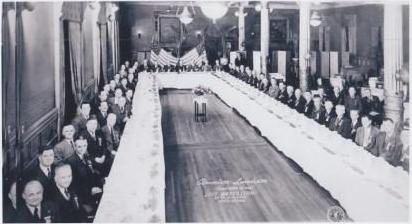 seats, the blue and gold reunion ribbons pinned to their chests flashing gaily in the defused light. Then, promptly at 1:00 pm, McMurtry would rise and hold his glass aloft and everyone would fall silent. Holding his glass toward the Dahlias in the middle of the room, McMurtry's normally booming voice would soften as he would impart, "Gentlemen, to the dead of the Lost Battalion." Each man would stand and hold his glass forward and repeat the toast. All would drink, sit, and McMurtry would then speak a few words. Following that, William Cullen, former Captain of Company H/308th who had received the Distinguished Service Cross for his defense of the difficult left flank of the Pocket, would stand and bark out that the roll be called, and each man would in turn stand and state his name and old outfit. The roll called, luncheon would then be served. After the meal they would all gather in the bar again and drinks would flow late into the night. Then it would be over until next year. 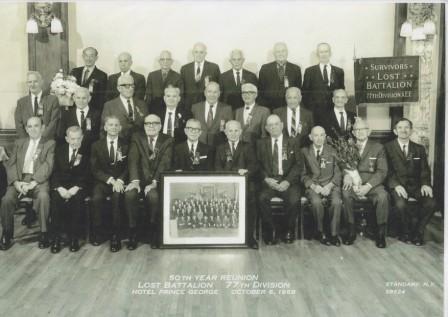 The regular meetings went on for 30 years until 1968, the 50th anniversary of the events in the Charlevaux Ravine. After that, any meetings of the men were informal and held at the 77th Division clubhouse in the city, but these got fewer and farther between as time passed. Soon they just petered out all together as the old soldiers faded away - just like MacArthur had said they would... 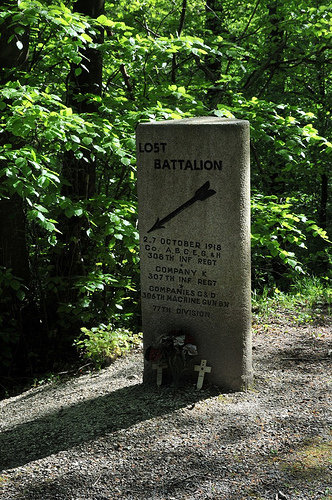 I started the Lost Battalion Preservation Association in 2007 with the express purpose of erecting a 'storyboard' which would give visitors a good overview of the events in the Pocket in 1918 which I hoped to place at or near the Charlevaux Ravine in France in time for the 90th anniversary of the events there in 2008. Until that time, the only marker to the Lost Battalion was the one erected in the 1920's by the American Battle Monuments Commission along the road above the site which only gives the dates and general units involved with an arrow pointing down the hill. While it is a favorite photo spot for visitors to the Pocket, it tells nothing of the dramatic episode or the men, and with the hope of correcting that I began to contact family members of the men and other interested parties whom I had associated with during the writing of the book, and question whether they would be interested in contributing to the project. All contributions were to be private and all money gathered was to be used for the creation, purchase and shipment of the storyboard, which would feature the story in both English and French. There was no formal organization created, only a group of individuals united in a cause. For want of a better name, and to honor the original survivors association and our mission to the men, it was decided that this informal organization would be known as the Lost Battalion Preservation Association.

Donations began to be collected early in 2008, and we soon learned that also in commemoration of the 90th anniversary of the episode in the Charlevaux, the ABMC and the town of Binarville had commissioned a sculptor to create a new memorial for the Lost Battalion, which was to be placed at the northern foot of Hill 205, along a walking trail through that section of the Argonne and with a view of the hillside off the left flank of the Pocket. It was decided that the storyboard would make a nice addition to the new sculpture. The text of the storyboard was translated into French by Mr. Gilles Lagin (USMC) and a company in Canada commissioned to build it. When completed, our storyboard was shipped via UPS to the Meuse-Argonne Cemetery, where the cemetery superintendent at the time, Mr. Phil Rivers, had it installed next to the new sculpture.

Bartlett's Battlefield Tours added a special two day stop in the Argonne on their October Western Front tour that year which enabled many of the contributors to the storyboard to be able to come to France and participate in a dedication ceremony there. The tour bus arrived at the hotel Le Tulipier in Vienne le Chateau, Argonne on the evening of October 5th, and the next morning myself, Mr. Ray Pirus (my assistant), Mr. Nolan Merryfield, Mr. Alexandre Herreman and Mr. Gilles Lagin led the entire Bartlett's group on day-long tours through that section of the Argonne and through the Charlevaux Ravine. The next day, October 7th, the tours continued and in the afternoon we held a small, private dedication ceremony at the storyboard where both Christian and Jewish prayers were said to the memories of those men who had given so much in that ravine. 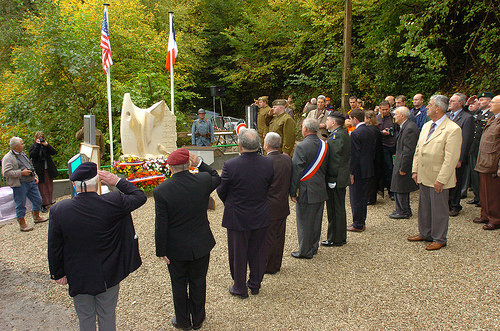 The next day the tour moved on, but an official dedication of the new sculpture and the storyboard was conducted by the ABMC and the Mayor of Binarville, with the guest of honor being Major-General William Terpeluk, the final General Officer commanding the 77th Regional Readiness Command, which had carried the lineage of the old 77th Division forward. (That lineage is now being carried forward today by the 77th Sustainment Brigade.) The event was well attended and we were proud to be part of the ceremony at the request of MG Terpeluk. After the ceremony, the town of Binarville hosted a wonderful dinner party under a huge tent in an open area off the left flank of the Pocket and the 2001 movie The Lost Battalion, starring Rick Schroeder and Phil McKee, was shown. The party lasted well into the evening, with plenty of regional wine and champagne flowing, and if one listened really close, I swear it was possible to hear the echoes of the LBSA in the background... 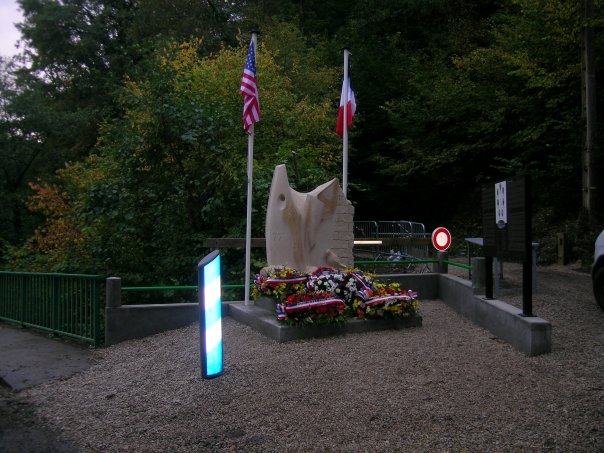