Floridians Who Served Over There

Over 42,000 Floridians served in the Army, Marine Corps, Navy and Coast Guard during WWI. Though U.S. foreign policy mandated a neutral position during the first three years of the conflict, the country reacted to the specter of war with caution, steadily strengthening its defenses. 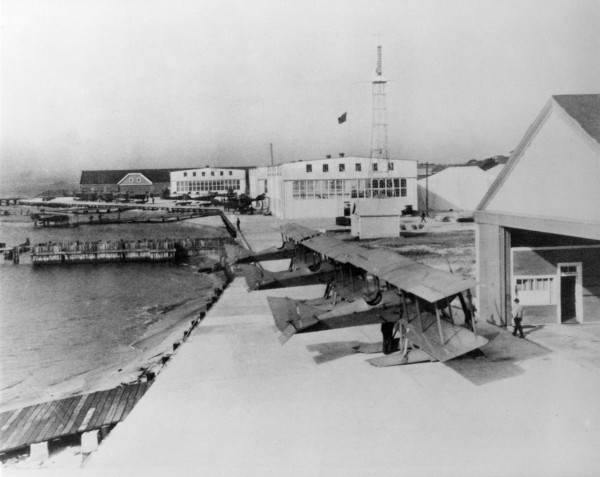 The Curtiss airplanes stationed by hangars at Pensacola Naval Air Station, 1917. State Archives of Florida.Soon after the Great War erupted in Europe during the summer of 1914, both the Florida Naval Militia and Florida National Guard saw enrollment increases. That same year, the United States Navy opened the nation’s first aeronautic training center, Naval Air Station Pensacola, where over 6,000 officers and enlistees would complete training by the war’s end in November 1918. 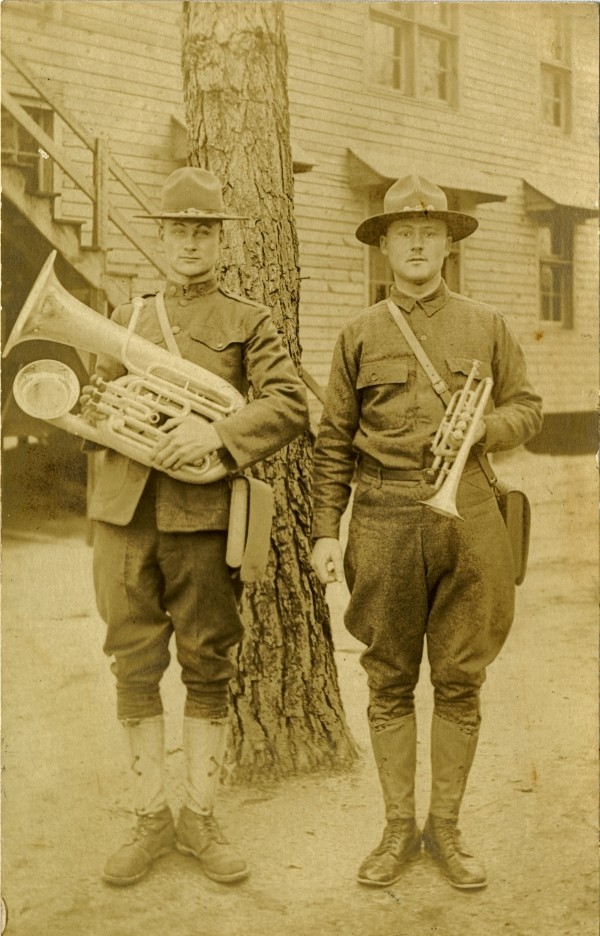 Members of the Koreshan Unity Edward and Julius Koester at Camp Jackson in Columbia, South Carolina, ca. 1918. Florida MemoryDespite moderate efforts at military preparedness, average civilians in Florida thought war was a distant possibility. However, rising German hostilities in early 1917 – aggressive submarine warfare and the publication of the Zimmerman telegram – signaled the increasing likelihood of war and propelled President Wilson to adopt a policy of armed neutrality. Floridians weighed in, and the majority of the state’s leading newspapers endorsed President Wilson’s move towards military engagement. Of the president’s actions, the St. Petersburg Daily Times pledged “the undivided loyalty of the American public.” The Miami Herald further concluded that “there [were] worse things for a nation than … armed conflict.” Other publications offered more measured responses. The Gainesville Daily Sun supported Wilson’s actions but held out hope that the country could “avert an open rupture with Germany.” The Madison Enterprise-Recorder further scrutinized U.S. diplomatic relations, observing that “we have been neutral in letter but not in spirit.” And in Estero, Florida, the Koreshan Unity, a utopian religious community, entirely rejected the prospect of becoming involved in the war. “Who will … show the way to a higher and nobler life, when this world war has completed its work of devastation and destruction?” cautioned the pacifist sect.

By April 1917, as unrestricted German submarine warfare continued to escalate, war seemed imminent.As a result, public opinion in Florida converged in support of full-fledged military action. On April 6, 1917, the overwhelming majority of the U.S. Congress, including Florida’s two senators and four representatives, voted to approve President Wilson’s request for a declaration of war. When the announcement was made to the American public, the Florida Times-Union echoed the nationalist sentiments sweeping the country, imploring “every American worthy of the name [to] bend his energies to ending the war through victory.” Just two days later, the Florida Naval Militia deployed from training bases in Sarasota, Key West and Jacksonville and reported for duty in Charleston, South Carolina. Soon after, an additional 2,000 Florida National Guardsmen mobilized for service. But aiding the Allied war effort in Europe would require more than reserve forces.

In May 1917, Congress passed the Selective Service Act, requiring all men between the ages of 21 and 31 to register for the draft. The law set Florida’s initial draftee quota at 6,325 enlistees. Beginning in July 1917, the first round of recruits went out of state to train at either Camp Jackson in Columbia, South Carolina, or Camp Wheeler near Macon, Georgia. An additional 36,000 more men and women would come from all over Florida to join the military during the war. In total, 35,829 joined the Army, 5,963 joined the U.S. Navy and Coast Guard and 238 joined the Marine Corps. 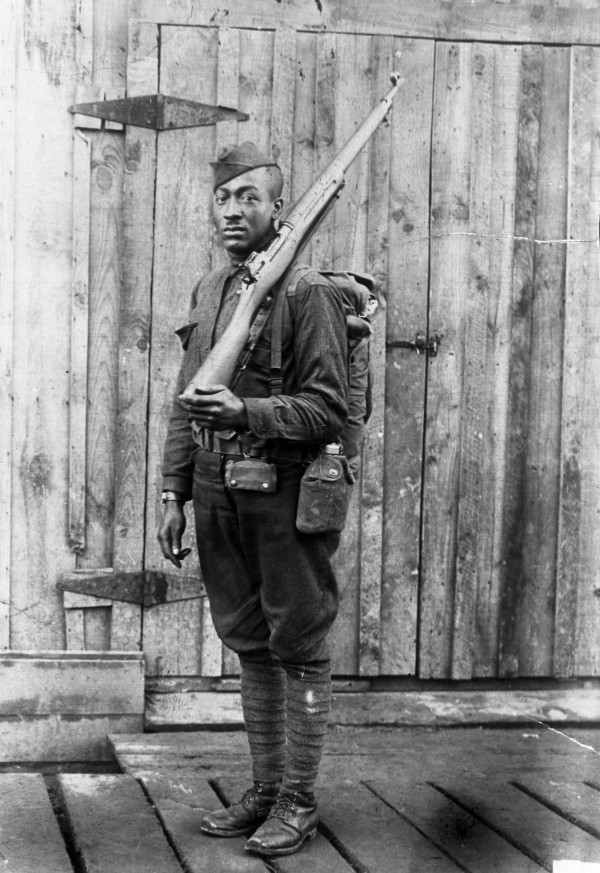 Portrait of Private Mitchell Evans of the 151st Depot Brigade. State Archives of Florida.African-American soldiers made up 36 percent of the total number of Army enlistees from Florida, but they were subjected to the armed services’ strict racial segregation policies. Neither the Navy nor the Marine Corps accepted African-Americans at all. The Army accepted a total of 13,024 African-American enlistees and 7 officers from Florida. With some exceptions, racial barriers prevented African-Americans from enjoying the same career advancement opportunities available to white soldiers. In keeping with Jim Crow custom, African-Americans were more likely to be drafted and assigned to labor battalions, performing menial tasks like cooking and cleaning, and less likely to see combat or receive special recognition for their service. 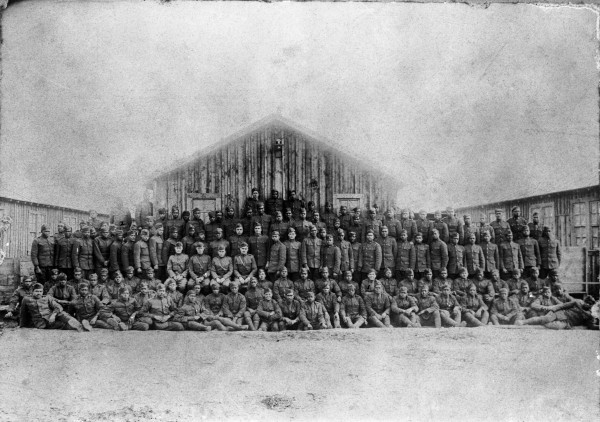 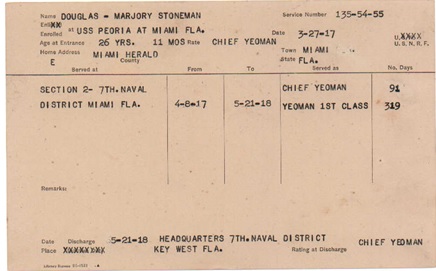 WWI service card of Marjory Stoneman Douglas, 1917. State Archives of Florida.Several thousand Florida women also joined the military during the war. Women enlisted as Yeoman Class (secretaries) in the Navy and as nurses in both the Army and Navy. Famed Florida author and environmentalist Marjory Stoneman Douglas served in the Navy and the Red Cross. Future Florida Congresswoman Ruth Bryan Owen, who was living in Germany with her husband, Major General Owen, when war broke out, also joined the Allied fight. Owen served in England as secretary-treasurer of the American Woman's War Relief Fund. She later worked in Cairo, Egypt, as a Voluntary Aid Detachment war nurse during Britain's Egypt-Palestine campaign. 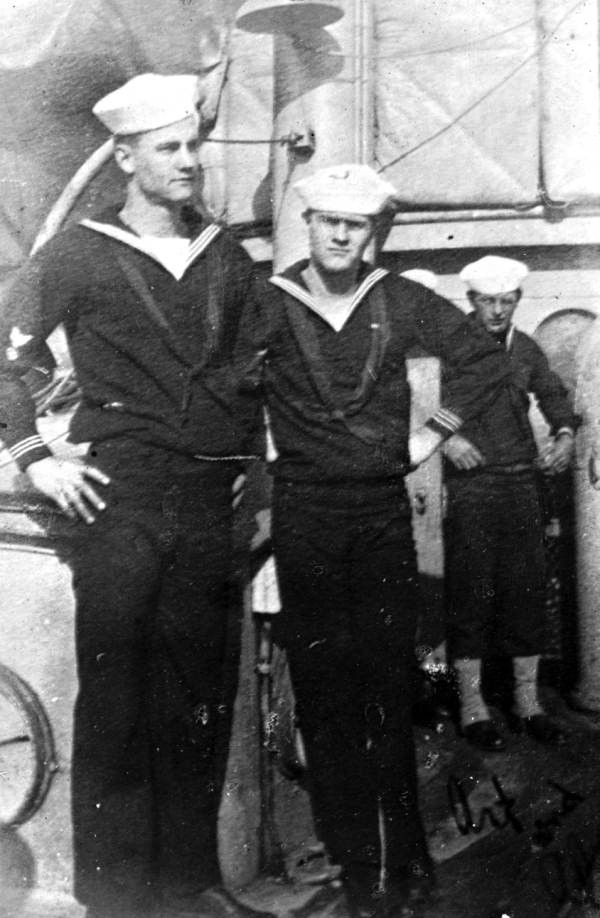 A total of 1,134 Floridians ultimately gave their lives during the Great War, including several men aboard the ill-fated U.S. Coast Guard Cutter Tampa, which was sunk by a German submarine on September 26, 1918. According to the U.S. Coast Guard, this incident marked the largest single loss of life by any Naval unit during the war. 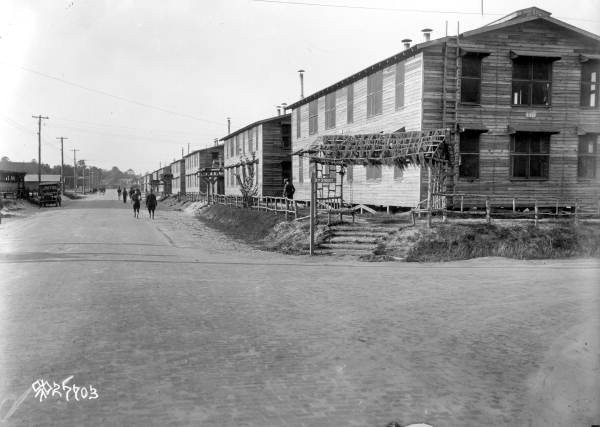 Camp Joseph E. Johnston, Jacksonville, 1918. Florida Memory.The Sunshine State’s subtropical coastlines and wide-open inlands became the site of numerous military training and intelligence facilities during WWI. The largest installment was U.S. Army Camp Joseph E. Johnston in Jacksonville, which opened in November 1917. The camp grew to include over 600 buildings and at one time held a population of just under 27,000. Additionally, five of the nation’s 35 flying schools operated in Florida: Naval Air Station Pensacola, Curtiss Field and Chapman Field in Miami, and Carlstrom Field and Dorr Field in Arcadia. Inventors Charles Kettering and Lawrence Sperry used the open spaces in Arcadia, or “Aviation City,” as it became known during the war, to test guided missiles. Their project did not succeed. Key West’s balmy winters also made it an ideal site for Thomas A. Edison, who chaired the Naval Consulting Board during the war, to conduct experiments for the development of depth bombs. President Wilson designated Key West, Tampa and Pensacola as defensive sea areas. Men stationed in those locations utilized an array of flying machines and sea vessels to defend the coasts against enemy attack. Thankfully, no such assault occurred. 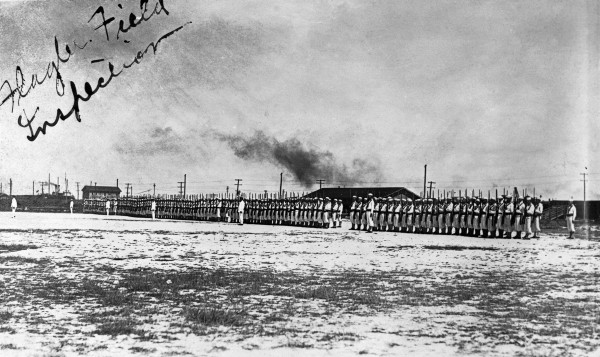 After Germany’s final defeat on November 11, 1918, Florida’s troops in Europe began returning home. Six months later, in June 1919, President Wilson signed the Treaty of Versailles, which outlined the terms for post-WWI peace. For some, the heavy physical and emotional burdens of modern warfare lingered. Troops were shell-shocked by their experiences in the trenches and their exposure to chemical warfare long after their return home. Nonetheless, the war brought Floridians – many of whom would not have otherwise ventured far from their hometowns – into contact with people from other states and created perhaps the first shared national experience of the 20th century. In his first post-war address to the Florida Legislature in 1919, Governor Sidney Catts reflected on the importance of the state’s contributions to the war and described the war as an effective catalyst for “cementing our own people, as a nation, in the bonds of friendship, unity and strength.”