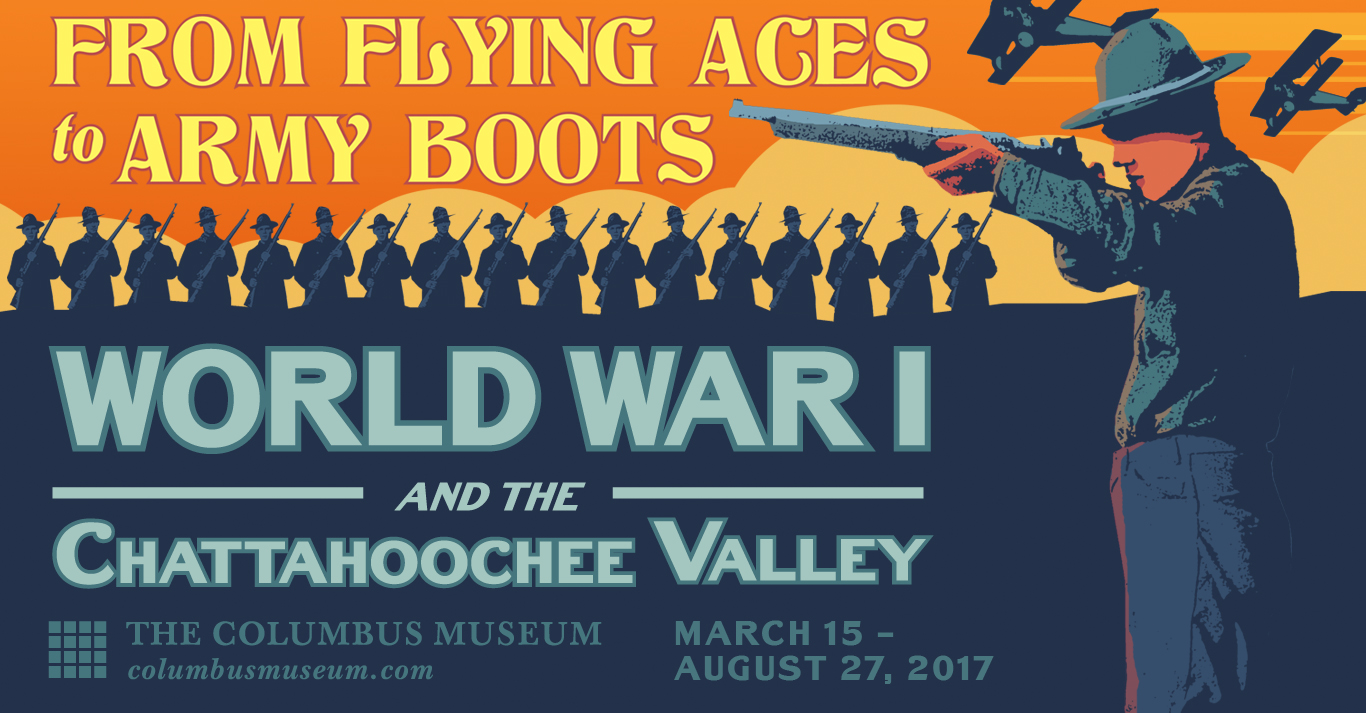 COLUMBUS, GA- In coincidence with the national effort to commemorate the United States’ entry into World War I,
The Columbus Museum will present a week of events related to the exhibition “From Flying Aces to Army Boots: World
War I and the Chattahoochee Valley.” The opening celebration will begin March 14, with an artist meet and greet and the
Annual Rothschild Distinguished Speaker Series, and continue with Third Thursday program, March 16. The exhibition
opens to the public March 15 during regular Museum hours in the third floor galleries and will remain open through
August 27. This exhibition is generously sponsored by the Columbus Cultural Arts Alliance and the Columbus
Convention and Visitors Bureau. It is endorsed by the United States World War One Centennial Commission.

Beyond military history, “From Flying Aces” will look at the social and political climate of the region during the first
years of the war, 1914-1917, and changes to the home front during 1917-1918, which included the formation of Fort
Benning. It will also highlight the experiences of local soldiers, African Americans’ service in the war, the life and career
of Columbus native and French flying ace Eugene Bullard, and women’s volunteer service. Alongside artifacts from
public and private collections, a special installation by contemporary artist Danielle Frankenthal will include paintings
inspired by World War I and what she calls “the ceaseless cycle of war, suffering, glorifying, and forgetting.” The
installation, A War Room, is based in part on the classic poem In Flanders Fields, written in 1915 by Canadian
Lieutenant-Colonel John McCrae. Danielle Frankethal will open the series of exhibit-related events, Tuesday March, with
a meet and greet for Museum members at 5:30 p.m.

Opening events will continue with the Annual Rothschild Distinguished Speaker Series Lecture*, Tuesday, March 14 at
6:30 p.m. This event is free and open to all ages. Dr. Jennifer Keene, a specialist in American military experience during
World War I and President of the Society of Military History will present the talk “ ‘A War for Democracy’: The
Experience of African Americans and Women in World War I.” Keene is a published author of several books. Her book
World War I: The American Soldier Experience will be available for purchase and signing in the Museum Shop shortly
after the lecture. A reception will follow the program.

The opening celebration week will culminate with the Third Thursday program, Thursday, March 16. “From the Great
War to the Big Band” will feature music of the World War I era leading up to World War II by the Columbus Cavaliers, a
big band orchestra. The program will begin at 6 p.m. with music, tours of the World War I exhibition, and light
refreshments.

For more information about the World War I exhibition or The Columbus Museum, visit www.columbusmuseum.com.

*The Rothschild Distinguished Speaker Series is made possible by a generous bequest from the late Norman S. Rothschild (1917-1998) in memory of his parents Aleen and Irwin B. Rothschild. The fund allows the public the opportunity to attend and participate in programming, including lectures by nationally recognized speakers, beyond the normal scope of activities.