Article provided by The University of Georgia

Editor's Note: This is the first story in a new series, called Georgia Groundbreakers, which celebrates innovative and visionary faculty, students, alumni and leaders throughout the history of the University of Georgia — and their profound, enduring impact on our state, our nation and the world.

It began with a simple idea from a University of Georgia professor — sell poppy flowers to raise money on behalf of soldiers killed and injured in World War I.

Now, nearly 100 years and billions of dollars later, the poppy has become the international symbol of remembrance and support for all military veterans, thanks to the tireless efforts of Moina Belle Michael, affectionately known today as "The Poppy Lady."

"During her lifetime, if you adjust for inflation, poppy sales raised $3 billion worldwide, most of which went directly to veterans," said Tom Michael, a great nephew of Moina Michael, who died in 1944. "She championed the poppy as a permanent symbol and reminder of our collective obligation to support our veterans and their families And through all the poppy sales around the world, her legacy of helping veterans lives on."

Moina Michael, an education professor from the small Georgia town of Good Hope, was in Germany on the final leg of a European vacation when World War I unexpectedly broke out in 1914 — forcing her to flee to Italy to find a ship that would carry her home. 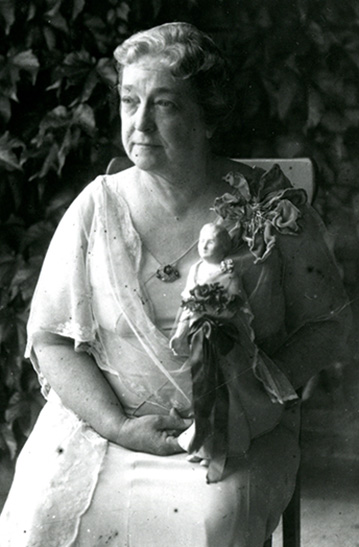 Moina Michael poses with the Poppy Lady Doll, a replica of her, that won a national doll competition held by the Federation Woman's Club in 1932. Michael retired from UGA in 1938 after having worked in education for 54 years.

After a harrowing 16-day trip through mine-infested waters and an ocean patrolled by enemy submarines, she returned to the relative quiet of her Athens, Georgia, home — but did not find peace. The nation was fixated on the war, and Michael did everything she could to bring comfort to soldiers awaiting deployment.

She made sure soldiers were adopted by local families. She also set up a campaign for the families to write the soldiers while they were overseas.

"How busy everyone was kept back in those early days responding to and arousing others to respond to the superhuman struggles to win the war," Michael wrote in her autobiography. "I anguished for some power by which our boys might be saved from gas, bombs [and] shrapnel."

During the war, Michael volunteered with the National YMCA. It was while she was working for the war effort in New York that she was struck by a sudden inspiration.

A young soldier left a copy of Ladies Home Journal on her desk with a marked page containing Lt. Col. John McCrae's famous poem "In Flanders Fields," about the war's devastation.

"The last verse transfixed me," she wrote. "'To you from failing hands we throw the Torch; be yours to hold ir high. If ye break faith with us who die, we shall not sleep, though poppies grow in Flanders Fields.'"

On Nov. 9, 1918 — two days before the armistice that ended World War I — she wrote her own reply to McCrae's poem — entitled "We Shall Keep the Faith" — and decided "always to wear a red poppy of Flanders Fields as a sign of remembrance and emblem of 'keeping the faith with all who died.'"

She left her office and scoured local flower shops in search of silk poppies to share with businessmen, veterans and soldiers. 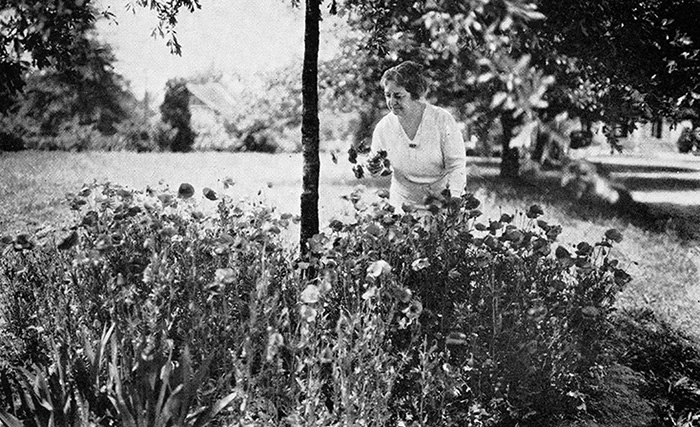 After the war, Athens and the University of Georgia became a hub for veteran rehabilitation. Michael taught a class of disabled servicemen and every Monday attended Disabled American Veterans chapter meetings. She even planted poppies on what is now UGA's Health Sciences Campus.

She also launched a national letter-writing campaign encouraging others to adopt the poppy. The American Legion designated the red poppy as its official flower in 1920, and distribution of poppies became a Legion national program in 1924.

"The soldiers who made the poppies for sale in America were classified as unfit for any employment by the government because of their war injuries. So they couldn't be hired. But they could make these little poppies," said Tom Michael, who has donated historic materials about his great aunt Moina to UGA's Hargrett Rare Book and Manuscript Library.

Other countries quickly followed suit. Remembrance poppies have been worn in the U.K., Australia and Canada since 1921 and since 1922 in New Zealand.

In the United Kingdom, many don a red poppy on Remembrance Day — a holiday similar to Veterans Day, which also is observed on Nov. 11. There, the British Royal Legion distributes about 45 million remembrance poppies and raises about $64 million annually to assist retired or injured soldiers. The funds support recovery centers, dementia care, medical expenses and even household repairs for veterans. 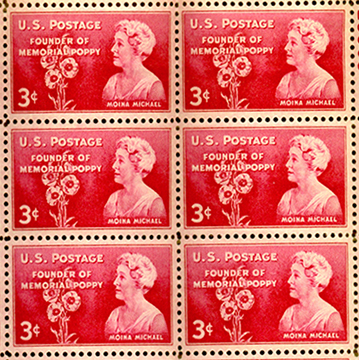 Michael was even featured on a U.S. postage stamp in 1948 — a red 3-cent stamp with her image, name and the title "Founder of Memorial Poppy."

Yet today, she is one of UGA's hidden treasures.

"Most people in Georgia don't know who she is," said Marie Mize, a library associate in the UGA School of Law and a member of the Moina Michael Poppy Project, a group that raises awareness for Michael and sells craft poppies to benefit veterans.

"I knew about her because my parents were both members of the American Legion. My father was a veteran and as a kid, I would go with my mom and we would sell poppies for the American Legion," Mize said. Members of her group crochet and cross-stitch poppies using plastic canvas and paper. They sell them online and at festivals.

"We've been working for three years now to buy an all-terrain wheelchair for a veteran (through the Independence Fund). That's $15,000. That's a lot of $3 and $5 poppies," Mize added.

With the centennial of the armistice approaching, there is renewed interest in remembering Michael and her unyielding dedication to soldiers.

In her hometown of Good Hope, there's a road named after Michael and a corresponding historical marker. Another historical marker denotes her birthplace. Good Hope changed its annual fall festival to the Poppy Festival to honor Michael. The festival features history displays, a bike ride, a Miss Poppy Pageant, and vendors selling items from handmade poppy crafts to poppy T-shirts.

And in downtown Athens, there's a plaque remembering the "poppy lady" across from UGA's historic Arch in the Broad Street median.

"The fact that she was able to accomplish what she did as a woman from Georgia in her day and age was truly remarkable," said James Cobb, B. Phinizy Spalding Professor of History Emeritus at the University of Georgia. "For many Americans, our intervention in World War I quickly became something to forget rather than celebrate. Her actions helped to reaffirm the strength of patriotic sentiment."