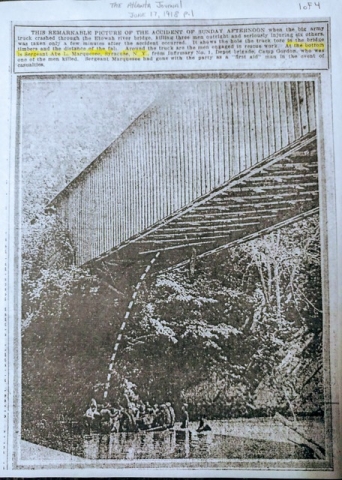 This remarkable picture of the accident of Sunday afternoon when the big army truck crashed through the Etowah river bridge, killing three men outright and seriously injuring six others, was taken only a few minutes after the accident occurred. It shows the hole the truck tore in the bridge timbers and the distance of the fall. Around the truck are men engaged in rescue work. At the bottom is Sergeant Abe Marguesee, Syracuse, N.Y., from Infirmary No. 1, Depot brigade, Camp Gordon, who was one of the men killed. Sergeant Marguesee had gone with the party as a "first aid" man in the event of casualties. On June 16, 2018, one hundred years to the date, a memorial event will take place remembering the soldiers from Camp Gordon that were tragically killed during a local military operation. The centennial memorial will be held at 3:00pm at 810 Bridge Mill Avenue, Canton, GA 30114. This is the closest location to the site of the incident on the Etowah River that is now part of Lake Allatoona. Here’s the summary:

This WW1 event has been forgotten in time until now.

On Sunday, June 16, 1918, a secret U.S. Army mission set out from Camp Gordon, at 1am in the morning, to gather evidence and capture army deserters in southern Cherokee County. Some of these deserters were from Camp Wheeler, in Macon, Georgia. The men deserted with their weapons and had banded together for security.

Before sun up, homes were raided in northern Cobb and southern Cherokee Counties, all south of Woodstock. The Army cut the phones lines to keep anyone from the houses they had raided from using a phone to warn other people of this raid. But, it was too late because the deserters had been tipped off days before.

The military convoy needed to cross over the Etowah River, to reach the western hills of Cherokee County, where is was believed the deserters were in hiding. The bridge to use to get into the target area, was Steele's Bridge, off Bells Ferry Road. The first three cars crossed with no problem but the first army truck to enter this covered bridge, broke through the bridge flooring, taking 20 soldiers down with it. The truck fell 40 feet and then upside down into the river below, on top of the men. Three were killed and ten injured. There is strong evidence that the bridge had been sabotaged by cutting into the support beams.

Of the three killed, one was the convoy’s medic. A trained nurse, Mrs.Winnie F. Carpenter, just happened to be visiting friends in a nearby home. When she heard of the incident she rushed to the bridge and started administering aid to the men. No one died after she took over. This lady would later receive a commendation from the United States for what she did that day. She attended Reinhardt College before the war and was trained in nursing at Erlanger Hospital in Chattanooga.

A second man killed, Cpl. Sam Smith, had just received his ten day pass to go home to visit his parents, in Massachusetts. He heard about this planned raid and choose to join the mission. He went home but not the way his parents had planned.

Most the men in this Army convoy were former members of the 82nd Division who, for different reasons, had been left behind when the 82nd deployed to France. The highly decorated Sgt. Alvin York was a member of this division.

As for the truck, it had already been used in Mexico by General Pershing’s forces, before being sent to Camp Gordon. The day after crashing into the river, it was pulled up a 40 foot embankment and driven back to Camp Gordon.

As for the deserters, the army stopped looking for them that day, and this gave them a chance to get away. It appears no one was prosecuted for this crime as the war ended several months later and attention turned to the soldiers coming back from Europe.

Soldiers from Georgia were in this ill fated army convoy. One from Norcross, one from Marietta, one from Atlanta and two army majors were from the Georgia selective service board. Another vehicle in the convoy carried reporters and photographers from the Atlanta Constitution. They reported extensively on this incident. The Georgia governor's personal secretary was in the last vehicle. --- Michael Hitt, World War 1 researcher, Roswell, GA. mdhitt2000@yahoo.com 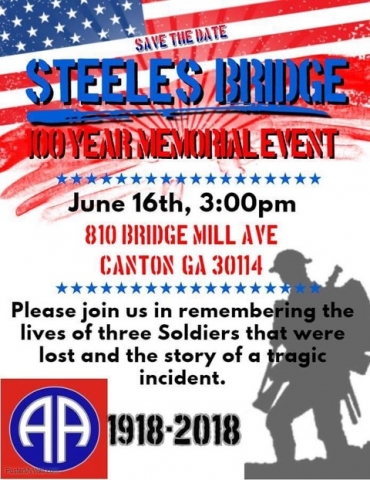