Tybee Island to Host a Memorial Dedication Ceremony to Honor the Sinking of the H.M.S. Otranto

This event unfortunately has been cancelled because of the approach of Hurricane Florence. It is not anticipated to be rescheduled. We encourage you (when you can safely do so) to visit the site and view the impressive historical marker that has been installed commemorating the centennial of the Otranto tragedy. 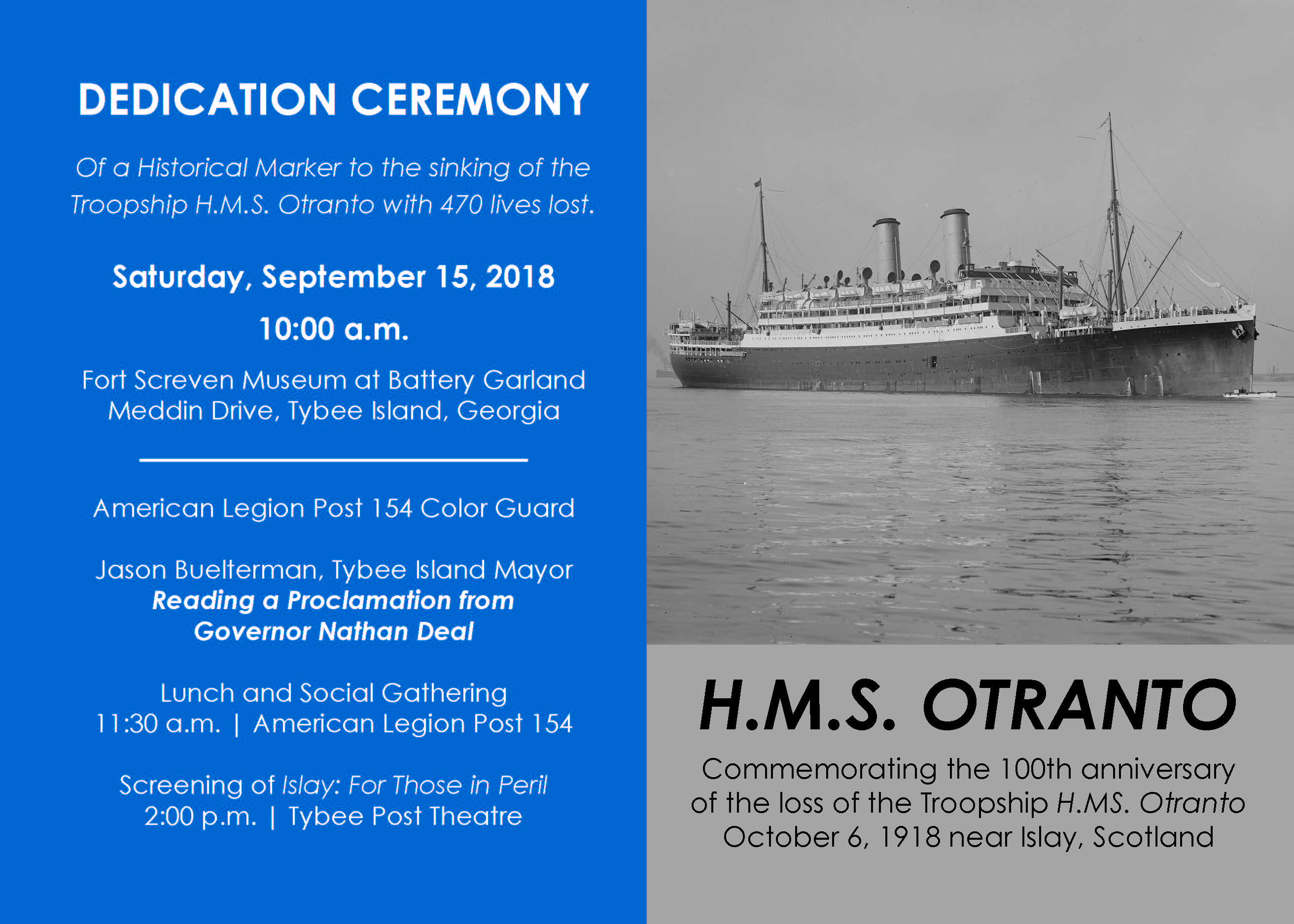 TYBEE ISLAND, Georgia (June 22, 2018) - The community of Tybee Island, Georgia, welcomes the public to attend a memorial dedication ceremony for a historical marker at Fort Screven in  honor of the 100th anniversary of the sinking of the British Troopship, H.M.S. Otranto, followed by a special screening of the BBC Documentary, Islay, For Those in Peril. The ceremony will begin at 10 a.m. on Saturday, Sept. 15 at the Fort Screven Museum at Battery Garland in Tybee Island.

In September 1918, 2nd Lt Samuel E. Levy was ordered by the Commander of Fort Screven to lead a group of new recruits to the Western European Front following America’s entry into World War I. Levy departed Fort Screven with 574 Coastal Artillery Corps (CAC) officers and enlisted recruits and traveled to New York where they boarded the British Troopship, H.M.S Otranto. bound for port in Liverpool.

The H.M.S. Otranto collided with another British Troopship on Oct. 6, 1918 in a severe storm, killing 470 of the 1,025 US and British servicemen on board, resulting in the single greatest loss of life in troop transport during World War I. Of the 358 American casualties, more than 130 were from Georgia. The collision took place off the coast of Isle of Islay, Scotland, and the ship subsequently struck a reef off the rocky shore, broke in half and sank.

A memorial of the dead stands in Isle of Islay, Scotland, and a statue commemorating the American dead stands in Nashville, Georgia. A third memorial marker was dedicated in Sylvania, Georgia, in 2017 by the Georgia Historical Society and the VFW. Due to the number of troops from Fort Screven, Georgia, a memorial is being dedicated on the grounds of Fort Screven to mark the 100th anniversary of the tragedy and to honor those that perished in the service of their country.

The ceremony will include a Presentation of Colors by the American Legion Post 154 Color Guard, remarks from Tybee Island Mayor Jason Buelterman, and other dignitaries and families of descendants.

Guests are welcome to attend the ceremony on Sept. 15 at 10 a.m. A light lunch and refreshments will be provided following the ceremony at the American Legion on Veterans Drive. A special screening of the BBC Documentary, Islay, For Those in Peril will be begin at 2 p.m. at the Fort Screven Post Theatre.