Article and photos courtesy of the Thomasville Times-Enterprise and Georgia Humanities. 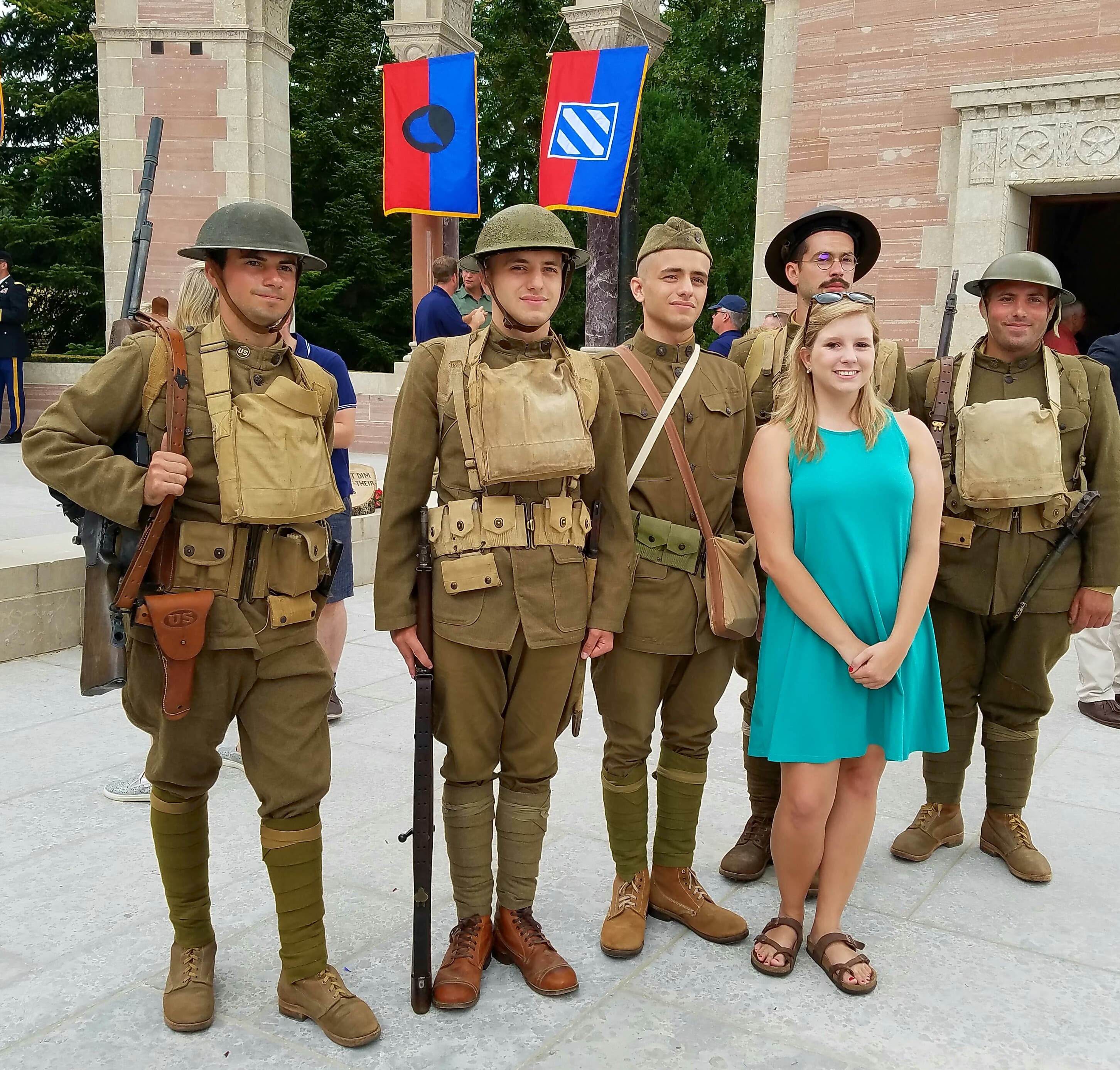 Summer is a time when many families go on vacation to popular destinations such as beaches, theme parks, and visiting relatives in other states. However, one Thomas County Central High School student had a family trip of a very different class, one that put them directly in the footsteps of history.

Senior Brooklyn Reese, her parents, and her chosen history teacher were treated to a once in a lifetime guided tour to some of France’s World War I historic battlefields and locations. Reese won the trip as part of the Georgia World War I Centennial Commission special award she earned during National History Day Georgia competition in April.

Reese’s one word to sum up her trip: amazing.

“This was the trip of a lifetime and went way above my expectations,” she said.

The Georgia World War I Centennial Commission, who sponsored the trip to commemorate the 100th anniversary of U.S. involvement in WWI, partnered with Georgia National History Day to award the trip to the high school student with the most deserving NHD project on a WWI topic.

Reese’s project was about the Hello Girls, U.S. Army Signal Corps female telephone operators and translators who were on the front lines in France during WWI.

“It was an honor to be chosen to accompany Brooklyn,” Patton said. “Being able to visit and see historical places with a student who has a real passion for history is truly a gift. I can’t think of a better retirement present!”

The trip was July 24-31. Their tour guide was Dr. George Cressman, a military historian, longtime NHD judge and president of the Camp Blanding Museum Association.

While in Paris, the group stayed at the Hotel Mercure, located a block away from the Eiffel Tower.

“We got to see the Eiffel Tower all lit up,” Reese recalled. “It was sparkling like glitter. It was beautiful.”

One of the Paris locations that stood out to Reese was Les Invalides, a World Wars museum that begins with the Franco-Prussian War and concludes with the end of World War II.

“The French consider the Franco-Prussian War as one of the major causes of WWI,” Reese said. “The museum is also home to Napoleon’s tomb. There’s a chapel with four smaller chapels off to the side that overlooks his tomb.”

Other trip stops in Paris included sites like the Arc de Triomph and Notre Dame Cathedral, but most of the trip’s itinerary was dedicated to visiting WWI museums, monuments and battlefields around Reims, northeast of Paris.

Reese enjoyed visiting the Reims cathedral, which was almost completely destroyed by the Germans during WWI.

“Reims was a city they had taken and the cathedral was used as an infirmary,” she said. “We saw photos of what it looked like before the war and after it was bombarded. They are still redoing much of the stonework.”

“Every night we went out and ate supper in the city,” she said. “The cuisine there is amazing. It is so, so good. We went to very nice restaurants and we had dessert every night. Crème brûlée was my favorite. It’s just so good. It’s creamy, and then you have the sugar on top that is crispy … it was my go to desert in France. I’ll only eat it there.”

The group’s tour also included attending a memorial ceremony at Croix Rouge farm, where the 167th Infantry from Alabama fought an obscure but significant battle.

“It was amazing to visit places like Croix Rouge,” Reese said. “I learned about the battle that took place there …. I saw the fields on which the battle was fought and what remained of the farmhouse. While there, we saw flag bearers who were descendants of those who fought there. It was truly awe-inspiring.

Another stop of significance was the Verdun area. An experience Patton will never forget was their visit to the Fort Douaumont Ossuary. It contains the bones of unidentified soldiers who died at the Battle of Verdun.

“Through small windows you can see the actual bones of over 130,000 soldiers,” she said.

Patton describes the trip as incredible and says the Georgia World War I Centennial Commission treated them to a true once in a lifetime experience. Her favorite aspect of the trip was having a private tour guide and driver.

“We were absolutely given the royal treatment,” Patton said. “Yes, we were tourists, but having historian Dr. George Cressman with us made our trip very different than a normal group tour. Every aspect of our trip was so well planned that all we had to do was learn, appreciate and enjoy ourselves.”

A trip highlight for both Reese and Patton was the WWI Commemoration Ceremony at Oise-Aisne American Cemetery.

“It was very heartwarming to see civilians and military personnel from both the U.S. and France come together to remember the triumph and tragedy of 100 years ago,” Patton recalls. “It was interesting to see soldiers dressed in WWI uniforms, witness a flyover by WWI bi-planes, and hear artillery fire from cannons used during the Great War.”

Reese calls the cemetery amazing and loved visiting it. She describes the ceremony as inspiring and breathtaking. She says the stories from the French and Americans — recounted by representatives of the French government and American military officers — made the ceremony.

“We listened to inspiring, impressive accounts of the war, some of which were in English and others were in French,” she said. “I witnessed two WWI era planes fly overhead, and then watched as people were called up for the wreath laying ceremony. At the flagpole in the center of the cemetery, the French flag flew beside the American flag. The ceremony put me in awe of the sacrifices made during WWI.”

Also, Reese had the opportunity to meet many military officials and dignitaries. For example, she conversed with the highest ranking commanders of the Georgia National Guard, executives from the U.S. Army Center for Military History, and the executive director of the American Battle Monuments Commission. She was able to speak with these delegates about her NHD project and her future plans. 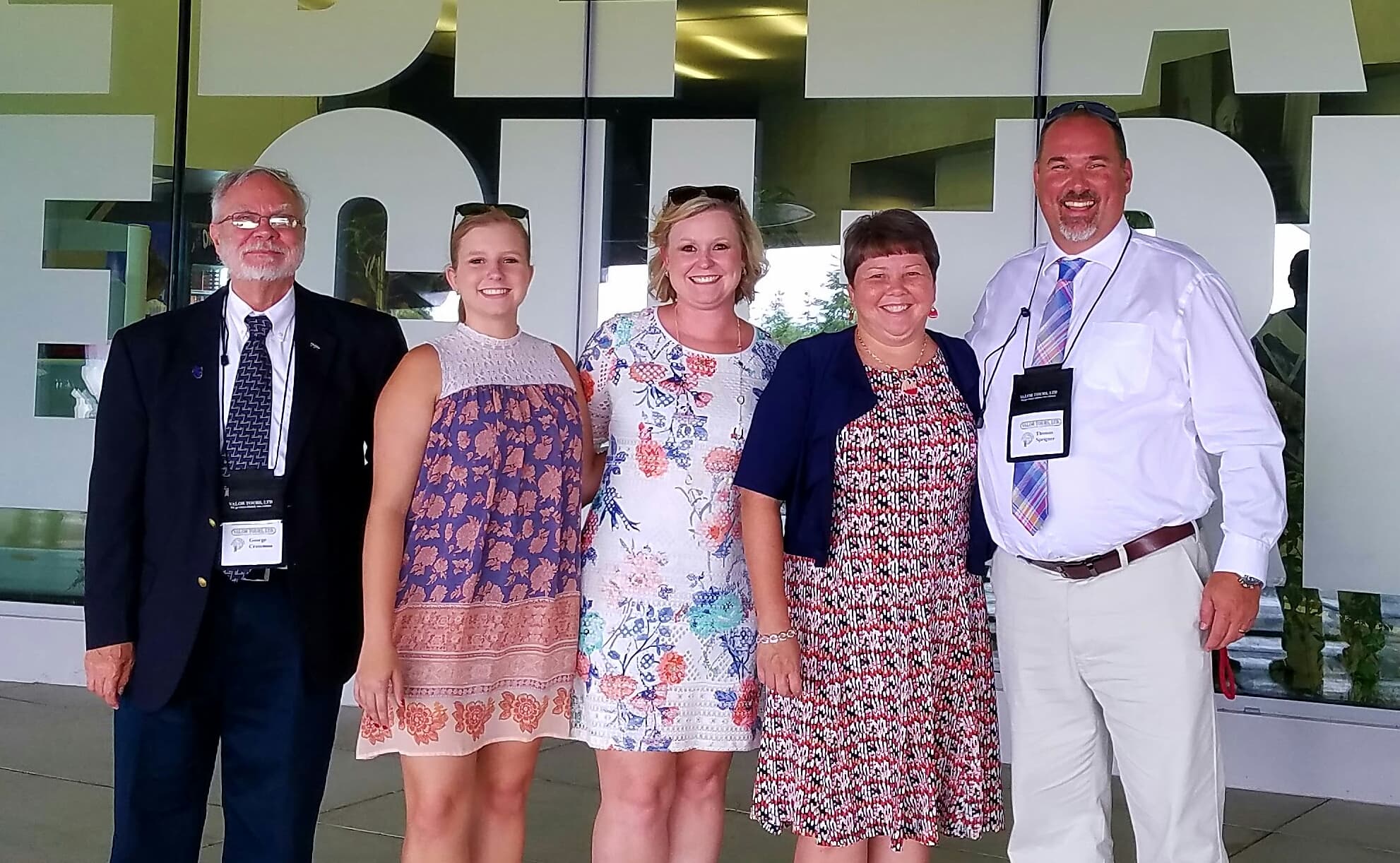 “It was interesting to talk to them, and I learned a lot from them as well,” she said.

It was amazing to meet the people she did while on her trip, Reese adds.

“One of the first people we met was Monique Seefried — director of the WWI centennial commission,” Reese said. “She was a major part in making the ceremony happen. It was very inspiring to meet her, to see all she has done and continues to do for the commission.”

Something that surprised Reese was how the scars of WWI are still visible in France.

This trip, the chance to see history up close, put the war’s human factor into perspective for Reese.

“Going over there really showed me the impact of war,” she said. “In class you get a lot of numbers and think a lot of men died, but when you go over there, you visit towns that were burned down or where families lost everyone. After visiting the cemeteries and seeing all those who are buried there, I truly saw that this war was horrible and that it killed so many young men.”

The experience also showed her the depth of human resilience.

“We (America) had a lot of men who died and we did send people over there, but for the French the war was in their literal backyard,” Reese said. “It was everywhere. It’s amazing that they bounced back from the war so quickly and then survived WWII. To see how the French are today and how they were during wartime, it shows you how war is terrible but how civilization can bounce back from it, which is really amazing.”