Celebrating the 4th of July during World War I

The day the Stars and Stripes flew from Victoria tower 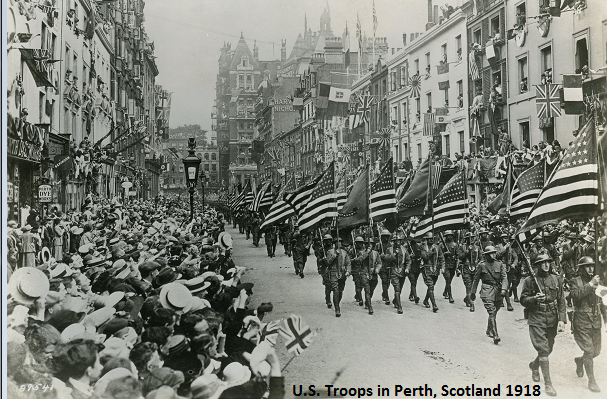 The Fourth of July holiday is an occasion for the United States of America to celebrate and commemorate the birth of the nation. It is interesting to recall how this holiday was celebrated during the years America participated in World War One. The entry of the United States into the war provided a massive boost to the Allied powers and marked a significant moment in the conflict.

Unsurprisingly, therefore, the July 4 holiday excited much interest among the Allied powers. In 1917, The Times newspaper, in London, claimed that ‘[t]here have been many memorable Fourths of July in the past one hundred and forty-one years, but never one so pregnant with the drama of great events as this’. For example, by the order of the King, the stars and stripes flew from Victoria tower.

The celebrations in France were even more extravagant. The New York Times reported on July 4, 1918 that ‘Paris t

urned out today as almost never in its history to celebrate the Fourth of July. The French capital not only extended a royal welcome to the Americans here, but made a thorough holiday of the day on its own account.’ The events included American troops marching through the city, where they were welcomed by ‘[c]rowds of people that jammed every available inch of space and every window in the buildings along the line of march, on roofs, and even in trees, cheered themselves hoarse’. Most notably, a ceremony was held to mark the renaming of Avenue du President Wilson.

Such displays of American patriotism highlight the sense of gratitude and unity in purpose that was felt by the Allied powers. Indeed, The Times offered an eloquent narrative of the significance of having America enter the war:

They will have their reward not only in helping to save civilization from its present agony, but in an America ennobled by sacrifice, strengthened by a new consciousness of unity, made more efficient for all the purposes both of war and peace, and broadened by contact with world-wide interests and problems. The political balance of the universe shifted when General Pershing’s troops landed in France, and America, in entering the war, has also entered the world – to play in it, we are very sure, side by side with the Allied democracies, a vigorous and inspiring part.

Closer to home, on July 4 1918, President Wilson delivered an address at Mount Vernon, Virginia where he sought to link the endeavours of George Washington and the other Founding Fathers of the United States with the present efforts in the battlefields of Europe. Wilson told his audience the following:

We intend what they intended. We here in America believe our participation in this present war to be only the fruitage of what they planted. Our case differs from theirs only in this, that it is our inestimable privilege to concert with men out of every nation what shall make not only the liberties of America secure but the liberties of every other people as well.

It is fascinating to see how President Wilson used the July 4 holiday as an opportunity to talk about the cause of liberty, and how the values and ideals of America’s forefathers remained equally potent in the twentieth century.