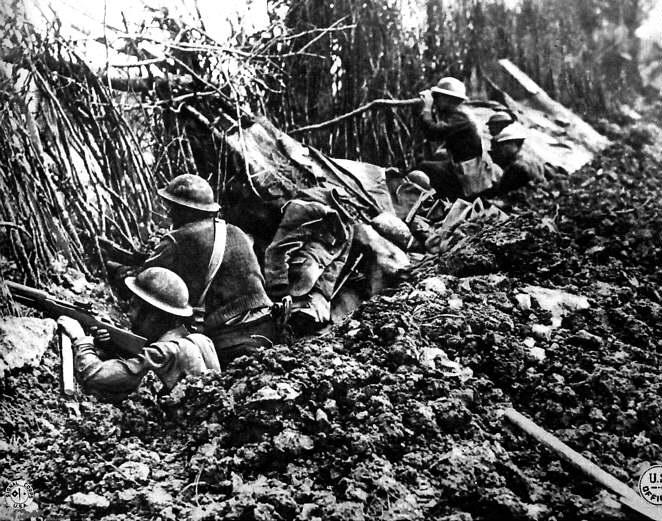 Soldiers of the US 132nd Infantry, 33rd Division, holding the line on the west
bank of the Meuse, opposite Consenvoye.  Signal Corps Photo.

A number of Illinois men and women were playing an active role in the World War long before the United States entered the conflict. Some were fighting on the western front, some were Red Cross nurses or welfare workers. Others joined the Lafayette Escadrille (the American aviation unit in the French army), or entered the French Foreign Legion. Records compiled by the Office of the Adjutant General show that Illinois gave 351,153 men to the Army, Navy, and Marines of the United States during the war. Out of every twelve men in the Army one was from Illinois. Illinois furnished more men to the armed forces than any other state in the Union, with the exception of New York and Pennsylvania, both of which had larger populations. The state's own division, the Thirty-third, was the only distinctly Illinois division that saw active service in France.

Money, next to men, was the greatest need of the government and Illinois gave its share and more. About seven percent of the subscriptions received for the nation's war loans, a total of approximately $1,300,000,000 came from Illinois - which, at the time, had about five percent of the population of the United States. Statistics compiled by the State Council of Defense show that the total contributions of the state to various funds raised by war aid and relief organizations was more than $45,000,000. One of the largest Illinois contributions to the war effort by Illinois farmers was the farm crop of 1918. Estimated by the Department of Agriculture to be worth $879,697,000 it was the greatest crop in money value that was ever produced by any state in the Union. As factories were quickly converted into munitions plants the output of Illinois factories in direct war contracts in 1918 was approximately $2,000,000,000.

By the time the War ended, more than 5,000 men from Illinois had given their lives in defense of world freedom and liberty.

Need a speaker for an event? Here's a list of speakers that can address topics on the First World War.

UNITS COMPOSED WHOLLY OR IN LARGE PART WITH ILLINOIS MEN

The 33rd Infantry Division was the only distinctly Illinois division that saw active service in France. Activated on July 1917 as a National Guard Division from Illinois at Camp Logan, Illinois, it began operations in France in May, 1918. The Division fought in Le Hamel, the Meuse-Argonne Offensive, the Somme offensive, and at St. Mihiel. Losses to the Division were high: 691 killed in action, 6,173 wounded in action. After the end of hostilities, it returned to Illinois, and was deactivated on May, 1919, at Camp Grant in Rockford.

The 84th Infantry Division was comprised of personnel from Illinois, Wisconsin, and Kentucky. It was formed in 1917, and formally activated in August, 1917. It was deployed to France in October 1918 to serve as a training formation for replacements which would be sent to the Western Front.  At the war's end, the formation was recalled home and, without having seen combat actions, and was inactivated in January 1919.

The 86th Infantry Division saw no combat in World War I. It was activated August, 25 1917 at Camp Grant in Rockford. It went overseas in August 1918, returned to the United States in November 1918, and was deactivated in January 1919. Individual units within the Division, particularly the 171st Infantry Brigade and 172nd Infantry Brigade, were used to reinforce or replenish frontline units.

The 88th Infantry Division was comprised of personnel from Iowa, Minnesota, the Dakotas, and Illlinois. It was formed at Camp Dodge, Iowa on August 5, 1917. It shipped overseas on September 7, 1918. While it never participated as a Division, soldiers from its ranks were used to reinforce or replenish frontline units. It lost 12 soldiers killed in action, and 66 wounded in action. It was inactivated on June 10, 1919 at Camp Dodge, Iowa.

RESOURCES FOR THE STUDY OF ILLINOIS IN THE FIRST WORLD WAR

N.B. There are many significant collections, online exhibits, and resources available in cultural institutions throughout Illinois. This is a representative selection and is not intended as a comprehensive list.

MEMBERS OF THE ILLINOIS COMMITTEE 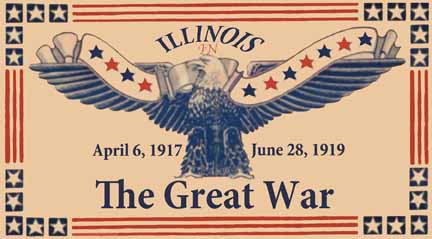 Records compiled by the Office of the Adjutant General show that Illinois gave 351,153 men to the armed forces of the United States during the war, the third highest total number. To commemorate the centenary of our involvement in the Great War, the Illinois World War I Centennial Committee has a mission to:

ADVOCATE. Encourage other entities in Illinois to recognize the contributions of Illinois to the First World War.

EDUCATE. Develop tools to educate others about the contributions of Illinois to the First World War.

FACILITATE. Support other entities that are recognizing the contributions of Illinois to the First World War.

ELEVATE. Recognize and celebrate Illinois veterans and civilians for their sacrifices and contributions to the First World War.

PARTICIPATE.  Join other states in a national effort to recognize veterans and civilians for their sacrifices and contributions to the First World War throughout the United States.

ILLINOIS INSTITUTIONS IN THE GREAT WAR 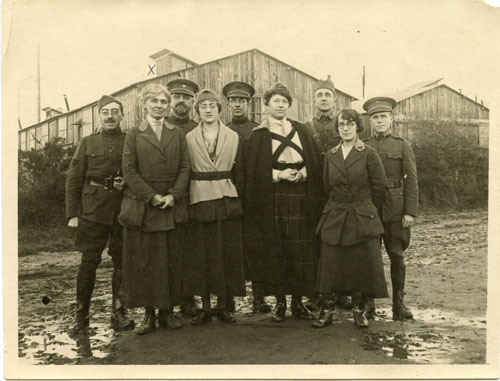 A growing number of institutions, companies, and universities are contributing their wartime stories for posterity. Learn more about them here. 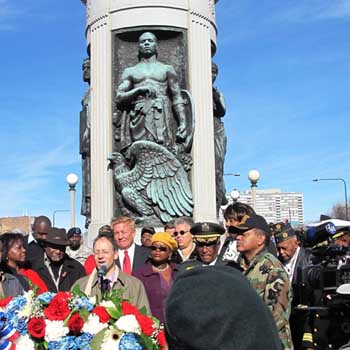 An interim report on commemorative activities at Illinois cultural institutions can be found here.

Illinois is fortunate indeed to be the home of the Pritzker Military Museum & Library, whose commitment and sponsorship of Illinois and National World War One centenary commemoration efforts has been both tireless and unswerving. 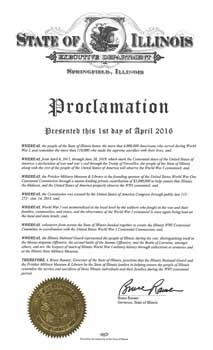