INDIANA IN WORLD WAR I

Since there have been Hoosiers, there have been Hoosiers willing to serve and sacrifice for their nation and its ideals. The state of Indiana is represented in every major United States war since the state’s founding and as of the twentieth century, hundreds of thousands of Hoosiers had served their country proudly. By April of 1917, Indiana had demonstrated their willingness and capability to serve and following the United States’ declaration of war, Hoosiers were ready to step up and answer the call of their nation.

Indiana’s soldiers and civilians quickly mobilized for war. Organizations both public and private adapted to meet the demands of war. Many Indiana companies, such as the Studebaker Corporation, placed their factories “at the disposal of the government.”1 In the case of Studebaker, they converted half of their plant capacity to the production of military equipment including artillery and supply chassis and wagons2. The Eli Lilly Pharmaceutical Company offered $25,000 in funding for medical equipment to form Base Hospital 32, which would be comprised primarily of personnel from Indiana3 and would treat almost 9,700 patients in France throughout the war4. Local newspapers and businesses encouraged the citizenry to purchase war bonds, to conserve supplies, and to otherwise support the war effort. Throughout the state, Hoosiers quickly got to work.

Enlisted Hoosiers went overseas with the first units to land on European soil. Among them, Sergeant Alex Arch of South Bend, Indiana was credited with having fired the first shot of the war for the United States, pulling the lanyard to fire the first American artillery shell towards German lines5 6. As well as the first strike, the first blow was received by Indiana as well. The first three American casualties of the war included young Corporal James Gresham of Evansville, Indiana who died in hand to hand combat while repelling a German trench raid near Bathelemont in France7. Hoosiers such as these cemented the state’s legacy as among the first to strike at the enemy and the first to make the ultimate sacrifice for their country.

As the first of the American Expeditionary Forces were arriving in France, the Indiana National Guard was quickly mobilizing. Units from the Indiana and Kentucky National Guards would form the 38th Division and the 84th “Lincoln” Division would be comprised of guard units from Indiana, Kentucky, and Illinois8 9. In addition, the famed 150th artillery regiment, which had gained a fierce reputation in the Civil War under the command of Captain Eli Lilly, was selected as one of the handpicked units to make up the 42nd “Rainbow” Division10. This division would see some of the most intense fighting of the war. The 150th Field Artillery, under the capable leadership of Colonel Robert Tyndall, would take part in six major engagements throughout the war11. The first day of draft registration, June 05, 1917, passed without incident in Indiana. During that first period, over 260,000 Hoosiers came forward to register. Over 400,000 more had registered by the war’s end.12 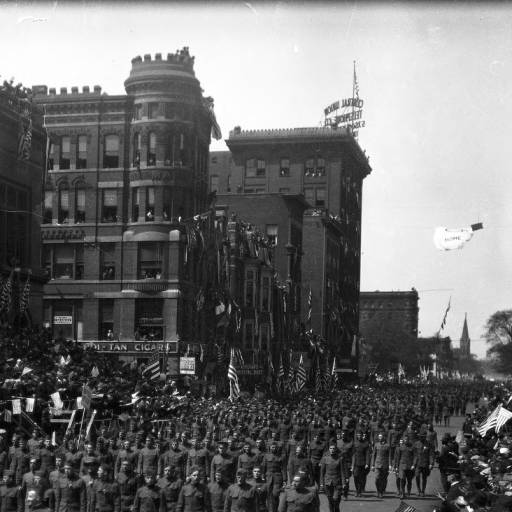 Welcome Home Day; Returned Soldiers on parade in IndianapolisThroughout the war, Hoosier men and women would time and time again prove their unwavering courage and loyalty to their country in spite of the many faces of adversity. Lieutenant Aaron Fisher of Lyle’s Station, Indiana would become the most highly decorated African American soldier from Indiana during the war for his extraordinary courage and level-headed leadership in the face of overwhelming odds.

Fisher received the Distinguished Service Cross and the French Croix de Guerre for refusing to retreat or surrender even while his unit was vastly outnumbered. Despite being wounded, Fisher continued to direct his troops amidst the chaos until finally reinforcements arrived and the German force was repelled.13 14 Lieutenant Samuel Woodfill would become a national hero when he single handedly incapacitated three German machine gun nests and earned the nation’s highest military award, the Medal of Honor as well as military honors from several European nations. While suffering the effects of mustard gas exposure, Woodfill captured three of the gunners and finish off the rest in intense close-quarters combat where he was eventually forced to wield a trench pick as a combat weapon15. At home, citizens continued to support the war effort through the Red Cross and Salvation Army, raising funds and sending supplies to the troops entrenched on the other side of the Atlantic. Women filled the jobs left empty by those men that had departed for the front, eager to serve their country. Among them was Opha Johnson of Kokomo who was the first woman to enlist in the Marine Corps16. She took over clerical work in the quartermaster department and was promoted to the rank of Sergeant by the war’s end17. This names only a few of the many outstanding Hoosiers who contributed to war effort, most of whom would not receive such recognition but who, beyond a doubt, contributed to the nation’s war effort, both overseas and at home.

Over 135,000 Hoosiers would serve their country throughout the war. Of this number, more than 3,000 would make the ultimate sacrifice. The countless number of Hoosier soldiers, nurses, and civilians who were there to proudly serve and sacrifice for their nation, deserve more recognition than they have or could receive. They had demonstrated their commitment to the ideals of the United States and proven that, whenever their nation needed them, the men and women of Indiana would be there to answer to answer the call.

INDIANA DIVISIONS DURING WORLD WAR I

The 38th Division was comprised of the National Guard units from Indiana and Kentucky, and was formed in August of 1917. The division was trained at Camp Shelby, Mississippi and arrived in France in October of 1918. While the unit did not see combat, most of those in the Cyclone Division were transferred as replacements into units fighting on the front line.19 20 21

The 42nd Division was comprised of units from 26 states and was activated in August of 1917.   Due to the rush to mobilize as America entered World War I, many individual states vied for the distinction of being the first to send their national guards into Europe. To curb the negative impact of such competition, the 42nd (Rainbow) Division was born of handpicked units from these 26 states and the District of Columbia. This included the 150th Field Artillery Regiment of the Indiana National Guard. The Rainbow Division arrived in France in November of 1917, heading to the front line in March 1918. The Division took part in six major campaigns throughout the war campaigns, spending almost half of a year on the front lines in regular contact with enemy forces.22 23

The 84th Division was often referred to as the “Lincoln” division as it was made up of units from the “Lincoln States”: Kentucky, Illinois, and Indiana. Activated in August of 1917, the Lincoln Division was trained at Camp Taylor in Kentucky and during the war operated near Neuvic in France.24 Apart from supply service, they were serving as a training formation to train replacements for the Western Front. Before the division saw combat, the war ended with the signing of the armistice on November 11, 1918.25