During the First World War, millions of Americans answered the call to serve the United States with unwavering loyalty to their nation. This number included thousands of African Americans who bravely stepped forward to fight and die for the United States, in spite of the prejudice they so often faced from the country they loved. Their dedication to their country and its ideals remained steadfast, even in the face of the discrimination and vitriol they faced from too many of their countrymen. These soldiers could only serve in certain segregated units, often under white officers. In addition, the military was reluctant to have these soldiers deployed in combat capacities, instead wanting to relegate them entirely to non-combat roles in support of the army, primarily through labor such as loading and unloading supplies from ships. Despite the uniquely high level of adversity they faced, many black soldiers would see combat on the battlefields of France and would perform admirably, earning many awards and commendations. Among these decorated soldiers was Aaron Fisher, a young man from Lyles Station in Southern Indiana. 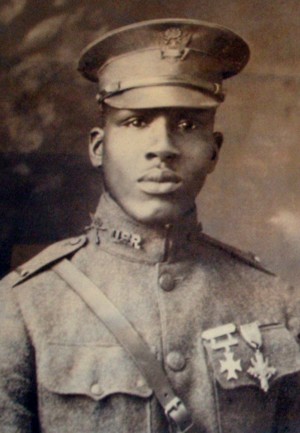 Lieutenant Fisher was awarded the Distinguished Service Cross from the U.S. government and the Croix de Guerre from the French government for the bravery and determination he displayed in battle, leading his troops to successfully repel a German raid despite his troops being outnumbered and himself being wounded. Aaron Fisher,along with his comrades in the 92nd and 93rd Divisions, demonstrated that in spite of the prejudices held by many of their fellow Americans, a black soldier was just as able and willing to fight and to die for their country as a white soldier. Through his dedicated and unwavering commitment to his country, Aaron Fisher secured his place in Indiana history as a hero.

Aaron Richard Fisher was born on May 14, 1892 to Benjamin Fisher and Macy Octiva Barnhill Fisher.1 Ben Fisher was a farmer and Civil War veteran from Kentucky, having served in the 6th colored cavalry regiment of the Union army.2 Aaron would attend school while working with his brothers on his father’s farm in the town of Lyles, Indiana.3 Approximately four and a half miles west of Princeton, Indiana, Lyles Station, also known as Lyles, was settled in the1840s by freed slaves and by the time Aaron was born, it was thriving with a population that totaled close to 800.4 Early on in Aaron’s life, when he was only ten years old, he would lose his mother. Macy Barnhill Fisher would die March 30, 1902.5 Upon completing elementary school in Lyles, Aaron would attend two years at Lincoln High School, Princeton’s black high school, and would continue to work on his family farm after leaving school until on February 28, 1911 he made the decision to enlist in the army at Jefferson Barracks in Missouri.6 7

After receiving training first in Leon Springs, Texas and then at Camp Sherman, Ohio, Fisher would be assigned to the ninth cavalry regiment before being transferred to the twenty-fourth infantry regiment. On September 13, 1914 Fisher was promoted to Corporal.8 While serving with the twenty-fourth infantry regiment, he would be sent to Columbus, New Mexico before taking part in what was to be known as the Mexican Punitive Expedition, where he accompanied the regiment to Dublan and later Palomas, Mexico. His unit would be stationed here from April 7, 1916 through the rest of the year. It was not until February 5, 1917 that they would withdraw back across the border to Columbus, New Mexico. He would remain in the southwest, only traveling between military installations in Arizona and New Mexico before the United States entered into World War I in April of 1917.9

While the United States mobilized for war, it quickly became clear that the United States’ military leadership had no initial intention to form black combat units. Instead the plans made for any black troops sent overseas had them serving as noncombat troops responsible for performing the labor of the army. This included work as stevedores, loading and unloading ships at the docks, ship repair and refueling, as well as building roads, railways, and bridges, and grave digging.10 While the contributions of these units to the war effort should not be forgotten nor diminished, as they were vital to the success of the American Expeditionary Forces, these laborers were nonetheless caricatured relentlessly by white publications and press back home. As put by Rawn James Jr., “Stevedores were caricatured in a manner that reinforced the worst stereotypes of African Americans. If black Americans planned to use their loyal military service in the Great War as a catalyst for attaining their civil rights after the war, then they would need more than stevedores and cooks.” African American leaders recognized the need to push for combat roles and through their efforts as well as the efforts of unit commanders, AEF Commander General John Pershing approved assignment of two black infantry divisions, the 92nd and the 93rd divisions, to combat duty. Both were assigned to serve with the French Army who after years of war, was in great need of troops.11 The 92nd would largely fight under American commanders while the 93rd would serve under the command of French officers. Aaron Fisher, who had by now been promoted to 1st sergeant, was at the beginning of January 1918, assigned to E Company of the 366th Infantry Regiment of the 92nd Division.12 He was quickly elected to attend the Second Officer’s Training Camp at Leon Springs, Texas and completed this school on May 19, 1918,13 receiving on June 01, 1918 the commission to 2nd lieutenant.14 On the 15th of June 1918, Fisher and his unit would be shipped overseas departing from Hoboken, New Jersey to later arrive at the port of Saint Nazaire, France.15

On September 03, 1918, Fisher’s unit manned a trench salient near Lesseux, France. A trench raid was conducted by German forces on Fisher’s trench. Despite being greatly outnumbered, Fisher continued to command his men and refused to abandon his position even after being severely wounded during the fight. Fisher’s command held their position, fighting off the attackers until the Germans were finally driven back from the salient by a counterattack.16 Following his heroic stand at Lesseux and suffering from his wounds and gas exposure, Fisher was transported to Base Hospital 45 at Toul to be treated for the wounds he had sustained.17 After recovering and following the end of the war, Fisher would remain in Europe with the Army of Occupation until February 28, 1919 when he finally returned home to the United States. 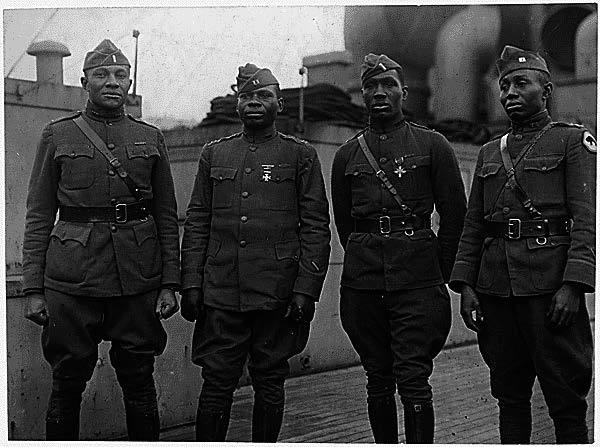 On March 17, 1919, Aaron Fisher was honorably discharged as a commissioned officer, receiving the rank of captain in the army reserve.20 He reenlisted on June 12, 1919, taking the rank of first sergeant of Company F, 24th Infantry Regiment. On August 20, 1921, Fisher would be promoted to the rank of warrant officer.21 He was sent to Fort Bliss, Texas for a short time before being sent to attend the Quartermaster School in Philadelphia from September, 1923 to June, 1924. After this period of schooling he would return to the Southwest, serving at Camp Little in Arizona and Fort Huachuca in New Mexico.22 While in the Southwest, Aaron Fisher would meet and later marry Kinney T. Reed, a school teacher from San Antonio, Texas, on June 6, 1925.23 24 On June 9, 1927, Fisher would set sail on the Chateau Thierry for Honolulu, Hawaii to be stationed at Schofield Barracks. Three years later, he returned to the mainland and after two years in New Mexico and Louisiana, was sent to the Philippine Islands for a two-year tour of duty.25

After arriving back in the states, Fisher would be transferred to the ROTC unit at Wilberforce University in Wilberforce, Ohio. Here he trained many of the finest officers that would serve in World War II, including Medal of Honor recipient John R. Fox.26 On June 16, 1942, Fisher was promoted to chief warrant officer. For his admirable work with the ROTC at Wilberforce, Fisher would also receive an Army Commendation Medal.27 He would remain at Wilberforce until he retired from the armed services due to developing health problems on December 31, 1947 at the age of 55.28

In the summer of 1948, Aaron Fisher, now living in Xenia, Ohio, once again entered into government service, this time in the civil service at the Wright-Patterson Air Force base.  He would remain here for seventeen years, working as a stock control clerk,29 before finally retiring after an impressive combined total fifty-three and a half years of government service on May 29, 1965.30 He would later be appointed on October 04, 1965 by the commissioners of Greene County, to coordinate the county’s work relief program at the age of 70.31 Throughout his later life, he would become active with the Shriners and would become master of Wilberforce Lodge #21 during 1965.32 33 After a long and eventful  life, Aaron R. Fisher would pass away on November 22, 1985 at the age of 89.34 He would be buried at Valley View Memorial Gardens in Xenia.35

During a time in American history when African Americans faced so much adversity from the prejudices held by much of the country, Aaron Richard Fisher was able to overcome and prove himself a remarkable soldier whose courage and determination placed him among America’s heroes. His unwavering dedication to his country and community throughout his life consistently demonstrated a selfless commitment to the safety and well-being of others and a will to stand up and protect what he knew was right. Fisher represented his home town of Lyles Station with distinction and will be known among the finest soldiers and citizens produced by the state of Indiana.