The First American to Die in Combat in World War I

Among the first American Doughboys to be sent to the front, James Gresham was a Hoosier who would be one of the first American soldiers to reach the battlefield in France and one of the first to give his life in the First World War. He was an average American from humble beginnings whose life was consistently characterized by personal sacrifice: both at home in Evansville, where he chose working to support his family over continuing his education, and on the Western Front where he was among the first Americans in World War I to make the ultimate sacrifice for his country and its ideals. James Bethel Gresham was one of America’s first fallen heroes in France whose actions, throughout his life, reflected a sense of duty and selflessness that we have now come to expect of the American soldier and citizen.

James Bethel Gresham was born to Alice Bethel Gresham (later Alice Dodd) and Green Gresham, on August 23, 1893 in Henderson, Kentucky.1 Following the death of his father on February 18, 1900, the family moved a short 12 miles over the border to Evansville, Indiana in September of 1901.2 Here, James attended the Centennial School, which had been located between Indiana Street and Illinois Street. His education would end not long after this as he began working in various factories to help support his family in this new city that they now called home.3 On April 23, 1914, four months before his 21st birthday, James enlisted in the United States Army, hearing the call of and ready to serve his nation.4 After first being sent to Jefferson Barracks in St. Louis, Missouri, he was called to Fort Bliss in El Paso, Texas in the June of 1914 to garrison and assist in patrolling the border with Mexico in response to the threat of paramilitary forces under the command Francisco “Pancho” Villa. Gresham would remain at Fort Bliss for the next three years maintaining security and protecting American interests on the Southern border. This changed on April 6, 1917, as the United States declared war on Germany and in June, James as a part of Company F, Second Battalion, 16th Infantry Regiment, 1st Division, would be called from Fort Bliss as a part of the American Expeditionary Forces in France under the command of Major General John J. Pershing. 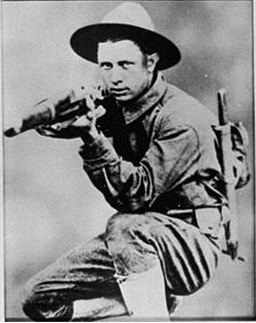 Gresham’s unit would be among the first of America’s forces to land with General Pershing in Europe at the port of Saint Nazaire, France on June 26, 1917.5 A week later on the 4th of July, Gresham as a part of the Second Battalion of the 16th Infantry paraded through the streets of Paris to help bolster the morale of France’s war-weary population who reportedly cheered on the Americans with enthusiasm.6 From there, Gresham and his division moved on to a training area in Gondrecourt, where they conducted training in modern trench warfare under the French 47th Regiment of Alpine Chasseurs. These elite French soldiers were described by one soldier of Gresham’s company as “the best trained and most courageous soldiers in the French army.”7 Upon completing their training in Gondrecourt, they moved on to Demange-aux-Eau, where they continued to drill formations and tactics of this new style of trench warfare that they were going to have to contend with. On the 29th of October, the Second Battalion of the 16th Infantry Regiment received orders to relieve the First Battalion who had been occupying the trenches near the small village Bathelemont, near Nancy, in order to familiarize themselves with the conditions of trench warfare on the Western Front. This sector was regarded by the French as a quiet sector, ideal to provide experience to the American troops that had yet to even see the trenches, and the First Battalion’s ten-day occupation of the trenches had not seen anything eventful enough to discredit such a claim. On the night of November 2nd, the second battalion entered the trenches one mile Bathelemont, with light-hearted enthusiasm, laughing and listening to the exaggerated stories of the First Battalion as they took over their positions in the trenches. Corporal James Gresham commanded a fire team of the First Platoon of Company F in a trench salient that was reported to be one of the closest to enemy forces, estimated by one witness as merely 500 yards away.8 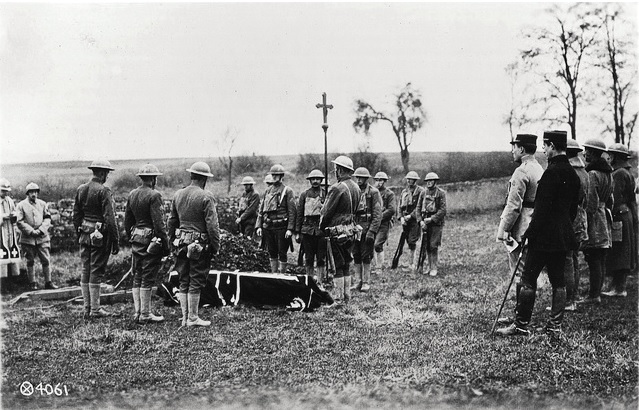 Sometime between the hours of two and three o’clock in the morning, German artillery began a barrage of artillery fire that gradually moved over Gresham’s salient of the trenches, effectively cutting off him and his comrades off from the rest of the American forces.9 Under the cover of this barrage, German soldiers then began a trench raid with the intent to take as many supplies and prisoners as possible. This was a common tactic in the war that had been employed by both sides in order to gain supplies, take prisoners, and weaken the enemy while only incurring a relatively low number of casualties. Accounts of the fighting that took place during the raid vary, but all indicate that it was done in extremely close-quarters, quickly becoming hand to hand, and in nearly complete darkness, artillery and gunfire providing only brief moments for one to take account of his surroundings before being plunged back into the darkness. Combat was terrifying and chaotic. Some accounts also suggest that the American sentries, in their first engagement with the enemy, confused the oncoming Germans soldiers for fellow Americans in the pitch dark of the night and did not recognize the approaching force as hostile until far too late. After a period of short but extremely intense fighting, the German forces withdrew with their casualties, having successfully gained a great number of American supplies and 11 American prisoners.10 With the raid ended and the barrage later lifted, American forces were able to pour into the trench to find five soldiers wounded and three dead. Among them: the young Corporal James Gresham of Evansville, who had been killed in hand to hand combat.11

Five days later, the bodies of Gresham and his two fallen comrades were buried on a hill overlooking the village of Bathelemont. The ceremony was attended by American and French soldiers with a General Bordeaux, commander of the French 18th Division, praising the bravery of the three soldiers and thanking them for their sacrifice.12 13 On this site, a monument would be erected by the French government in honor of these soldiers following the end of the war as well as another after 1945, as the original had been destroyed by German Forces during World War II. The new monument has been relocated near the graveyard, approximately 500 meters west of the village of Bathelemont.14 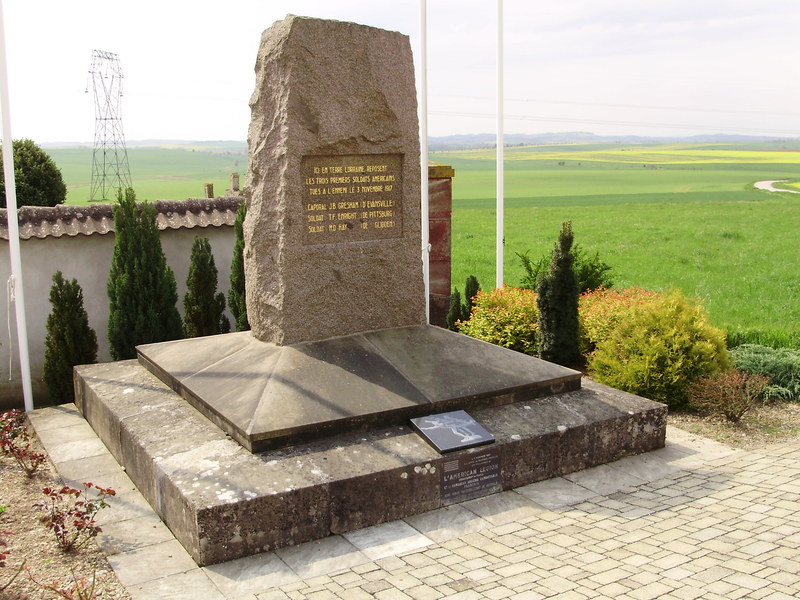 The bodies of the three American soldiers were brought back to be buried in their homeland following the end of the war. In July of 1921, Gresham’s body was returned to the United States and at the request of his family, he was buried in Locust Hill Cemetery in Evansville, Indiana next to his brother and sister.15 Later, funds would be raised to create a monument in the state capitol in which Gresham’s remains would be relocated, however Gresham’s family preferred that Gresham stay in Evansville. Nonetheless, in 1930 a cenotaph for Gresham was placed in the Indiana War Memorial Plaza’s Sunken Garden square with an inscription memorializing him on the north face of the black granite tomb.16 In Evansville, markers and memorials would be placed in his honor at such public places as the Evansville coliseum and funds were raised to provide a home for Gresham’s mother which still stands today. It has been preserved by the city of Evansville as a lasting tribute to commemorate that it was one of their own who was among the first to stand in defense of and make the ultimate sacrifice for his country and the ideals it championed.