Fired the First American Shot of the War

From the moment the first troops of the American Expeditionary Forces arrived at St. Nazaire, France on through the war and subsequent occupation of Germany, Indiana was always represented. In the case of Corporal James Gresham of Evansville, this meant being among the first to make the ultimate sacrifice for their country. In the case of Alex Arch of South Bend however, this meant being the first to strike at the enemy. On October 23, 1917, Alexander Arch would pull the lanyard on the gun that would cement his name in history. In a time when many immigrants’ loyalties were questioned, this young Austro-Hungarian immigrant from South Bend would deliver a sharp rebuttal to such doubts and earn a place among the American heroes of World War I. 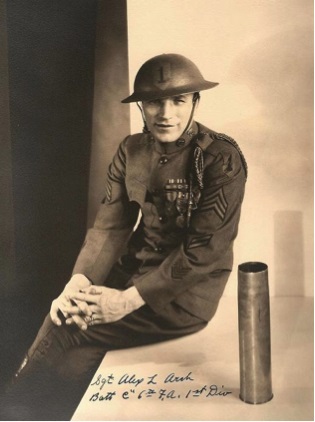 Alexander Louis Arch was born on March 19, 1894 to Istvan and Terezia Arch in the small village of Potok in Austria-Hungary, which is now the village of Potoc in modern Romania.1 He was the youngest child with a brother, Mate, who was nine years older and a sister, Rosa, who was three. In 1903, at the age of seven, Alex and his family would immigrate to the United States where his father began working as clerk at a bookstore in South Bend, Indiana. Alex would later begin to help out as well, joining his brother Mate (now referred to as Matthew) working at Oliver Chilled Ploughworks to support his family, now with two younger siblings, Joseph and Elizabeth, to take care of as well.2 A mere seven years after arriving in America, Alex’s mother Terezia Arch would pass away, taking a big toll on Alex and his family. He would later be quoted saying “Home without a mother isn’t quite a home,” revealing just how important his mother was in his life.3

After working for a short time at the Singer Manufacturing Company, Alex made the decision to serve the country he had moved to and fallen in love with, enlisting in the United States Army on June 16, 1913.4  He was sent to Fort Douglas in Arizona where he received training and served along the United States Southern border with Mexico where he was promoted to the rank of corporal. He was later among the soldiers that John Pershing led into Mexico in pursuit of the paramilitary forces of Pancho Villa in an attempt to capture Villa in retaliation for his raid on Columbus New Mexico in 1916. During this expedition, Arch received a promotion to the rank of sergeant.5 These forces would be recalled and on April 06, 1917, the United States made its entrance into World War I. Arch as a part of Battery C of the 6th Field Artillery, 1st Division, would sail for France in July of 1917, later arriving at the port of St. Nazaire.6

After training with French forces, the American Expeditionary Forces under the command of General John Pershing began to move towards the front. Arch accompanied his unit moving their artillery into position at the front near the village of Bathelemont in France. Battery C was the first American artillery battery to position itself within firing range. On October 23, 1917 at exactly 10 seconds after 6:05 in the morning, according to Arch himself, Alex Arch pulled the lanyard that sent the first American shot of the war, a French 75mm explosive artillery round, screaming towards a German artillery battery in the German controlled region of Alsace-Lorraine near the French town of Xanrey.7 According to Arch, the gun fired seventeen more times over the course of two hours.  After they had boldly announced the United States presence on the battlefield, the battery took a break from firing to have an 8:00 breakfast.8

News reports sped away from the front back to the United States but it wasn’t until Halloween, seven days afterward, that the New York Times would report “Indiana Sergeant Fired First Shot.” This article and many others were based on accounts from news correspondents in the field at the time. The report listed the man firing the first shot as a Sergeant who, when asked where he was from, replied, “I’m from South Bend, Indiana.”9 The identity of the gunner remained a mystery for a short while. Though it was known he was from South Bend, the stories of various publications were patched together from reports of the war department and accounts of various correspondents, leading to inaccuracies and confusion.  For example, many reports claimed he had red hair and was Irish, even though no record of the firer's nationality had been made and of course Alex himself had brown hair and was Austro-Hungarian. Even after Wilma Sabo, a girl friend of Arch’s, received a letter from Alex in which he claimed he had fired the first shot and described it, some remained skeptical, repeating accounts that described the sergeant with red hair and some imposters even seizing on the confusion in an attempt to take the credit.10 It was not until almost a year later in September of 1918 that the officer in charge of the battery confirmed in a letter that it was indeed Alex Arch of South Bend who fired the shot, ending the dispute.11 The city of South Bend made numerous attempts to bring the first American gun fired to be placed on the courthouse square in South Bend, however these attempts would be unsuccessful and after being brought back from Europe, the gun would be placed in its permanent home at West Point Military Academy, where it remains to this day.12

While at home Americans were just learning of the man who fired the first American shot of the war, Alex Arch was recuperating in a French war hospital. On May 28, 1918, he was reported to have been gassed and then severely wounded by shrapnel near Toul in France.13 14 Arch’s status remained listed as severely wounded for the next month until in early July his family was notified that he was successfully recovering from his injuries.15 Arch would not see much further action as the war ended with the signing of the armistice on November 11, 1918.

Following the Allies’ victory, Arch would return to crowds of fans in the United States as a war hero. He would arrive back home again at last, disembarking from the S.S. Zeppelin with his unit on September 08, 1919.16 Throngs of people wanted to meet the man from Indiana who fired the first American shot of the war. Just a week after arriving, Arch was in Washington having lunch with Indiana Senator James Watson before meeting the Senate Military Affairs Committee. He would later receive a three minute standing ovation in the House of Representatives along with another member of his gun crew, Corporal Louis Varady, also from South Bend.18 19 Those on Capitol Hill were not the only ones excited to meet the young sergeant. On September 17, the streets of New York City were lined with crowds of spectators eager to see those returning from war during a Welcome Home Celebration parade. Arch could be found near General Pershing in the parade riding with the gun that had fired the shot.20

New York was excited to see him. South Bend was ecstatic. The St. Joseph County commissioners appropriated $2,000 to pay for Arch’s homecoming in South Bend.21 The Mayor of South Bend appointed an “Arch Committee” to plan the celebration who declared the day Alex returned, October 29, to be “Alex Arch Day”.22 Immediately after getting off the train, Arch was greeted by friends and relatives and would be traveling between houses and receptions by a car that had been donated for the occasion by A. R. Erskine, president of the Studebaker Corporation. His family fielded visitors to their home, his father Istvan (now known as Steven) greeting each to come through the door.23 Arch would return after being discharged from the army to live with his father at the home of his now married sister Rosa Vargo and would begin his life as a civilian, starting work at the Studebaker auto factory.24

It would not be long before Arch once again entered the public eye when he, along with Paul Cunningham and Henry Strobel, were chosen by Indiana Governor Warren T. McCray to represent Indiana as mourners at the burial of the Unknown Soldier on November 11, 1921 along with Indiana war hero and Medal of Honor recipient Samuel Woodfill of Belleview, Indiana, who was chosen by General Pershing to serve as pallbearer.25 While in Washington, Arch would be greeted by President Warren G. Harding who had reportedly read much about Arch and was “very glad indeed,” to finally meet him.26

While in Washington, Arch was reportedly asked whether he was married yet to which he replied, “No, one war was enough.”27 It wouldn’t be long before he met a young woman who changed his mind on that subject. On August 09, 1924, Alexander Arch married Julia R. Rebics of South Bend.28 Alex soon was a father as over the next six years, Mary, Yolanda, Margaret, and Alexander Arch Jr. would be born. The family would occupy a cozy house at 1407 West Dubail Avenue in South Bend.29 30

In 1931, Arch would reappear in the press, this time in a public argument with former war correspondent Floyd Gibbons, who had reported on the first shot fired at the beginning of the war. Reportedly, Arch had given Gibbons the cracked shell of the first shot fired to bring back to the United States for him, which Gibbons had done. Arch now demanded to have that shell returned to him, a request to which Gibbons would eventually acquiesce.31 Arch gave the shell to the war department in the years that followed and used his celebrity to support the war effort when the United States later entered World War II. Along with actress and Fort Wayne native Carole Lombard, he participated at a bond rally in Indianapolis and allowed the actress to use the first shell fired in World War I as a writing board to autograph bond applications.32 This would be one of Alex’s last appearances in the public eye.

After the war, Alex Arch backed out of the limelight for the final time. He lived out the rest of his life peacefully, enjoying time with his family and friends in South Bend until in December 1979, Alex Arch passed away at the age of 85. Arch was buried at Chapel Hill Memorial Gardens in Osceola, Indiana.33 He had lived a full life marked by courage, heroism, and perseverance which had earned him a place of honor in the annals of Indiana’s history. In many ways, from his beginnings in the small village of Potok, Hungary, to that fateful shot early in the morning of October 23, 1917, until his final days in South Bend; Alexander Arch proved that he was the embodiment of all the qualities idealized in an American as well as living evidence that, as one Indiana reporter put it, “Hoosiers never start anything they can’t finish.”34