The officers, nurses, and staff of the various hospitals throughout Europe, are the often unsung heroes of World War I. By the war’s end, 21,480 nurses had enlisted in the Army Nurse Corps with over 10,000 of them having served overseas.1 Amongst them, Hoosier nurses were well represented. “Lilly” Base Hospital 32, stationed in the town of Contréxeville in France, was funded largely through the contribution of Eli Lilly & Company, the Indianapolis chapter of the Red Cross, and the citizens of Indianapolis2 and was comprised primarily of officers, nurses, and enlisted personnel from Indiana.3 Throughout its year of active service through 1918 and into the beginning of 1919, the hospital was responsible for the care of 9,698 admitted patients representing 35 different nationalities and every U.S. state with the exception of Nevada.4 Supported by Hoosier funds and personnel, Base Hospital 32 serves as a clear representation of Indiana’s unwavering commitment to the national cause from the very beginning and throughout the First World War. 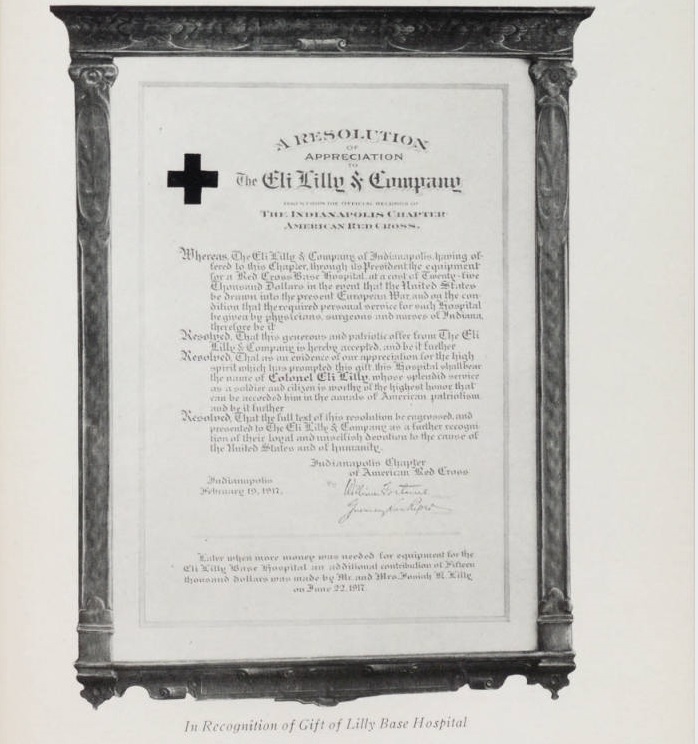 The origins of Base Hospital 32 can be found in a letter from Josiah K. Lilly, president of Eli Lilly & Company, to William Fortune, president of the Indianapolis Chapter of the American Red Cross, dated February 19, 1917. In this letter, Mr. Lilly offered $25,000 to purchase equipment for a base hospital in memory of his grandfather, Indiana Civil War hero Colonel Eli Lilly, should the United States declare war. This hospital would be staffed by physicians, surgeons, and nurses from Indiana and would bear the Colonel’s name. Lilly’s offer was gratefully accepted by the Indianapolis chapter of the Red Cross and two months later, Lilly would make good on his offer when the United States entered World War I in April of 1917. As planning for the hospital quickly got underway, it soon became apparent that far more than Lilly’s $25,000 contribution would be needed to equip the hospital, with some estimates even exceeding $50,000. Thankfully, this crisis was quickly resolved, largely from donations during an Indianapolis Club dinner at which two donations were collected for the hospital, amounting to a sum of $27,500. More than half of this was from Mr. and Mrs. Lilly themselves, demonstrating their commitment to the creation of this hospital.5

With the hospital’s funding now secured, staffing the hospital became the next priority. Major Dr. Edmund D. Clark of Indianapolis was appointed as director of the hospital with Miss Florence J. Martin, also of Indianapolis, being appointed chief nurse.6 On September 01, 1917, the officers and enlisted men of Lilly Base Hospital began training at Fort Benjamin Harrison, northeast of Indianapolis.7 Six days later at the Indianapolis City Hospital, the unit’s nurses took their oath and on September 9th left for New York where they were quartered in barracks at the Columbia War Hospital, drilling and adjusting to military life.8 They remained in New York for three weeks before moving on to Hoboken and later Ellis Island.9 On the night of December 04, 1917, aboard the SS George Washington, a German ocean liner that had just recently been repurposed as a troop transport, the staff of Base Hospital 32 began their crossing of the Atlantic.10

It would not be until the morning of Christmas Eve that the men and women of Base Hospital 32 would finally feel land under their feet again as they landed at Brest on the Northwestern coast of France.11 Not long after, they were speeding by train towards the French town of Contréxeville, arriving in the morning of December 26th.12 Formerly, Contréxeville had been a summer resort, due to the reported medicinal properties of its springs, and had a number of the hotels and luxuries that one could expect of a resort town.13 Its position along key railways and its proximity to the front, made it an ideal location geographically for a war hospital. In addition, its multiple hotels would make for adequate hospital buildings. Eight of these hotels were assigned to Base Hospital 32 and by the end of February, the hospital was up and operational, having quickly transformed the hotels into respectable medical facilities.14 Until this point, the hospital had been primarily treating illness among its staff as well as civilians, rather than having many military casualties to tend to. This would not remain the case for long, as the hospital would soon see its first convoy of wounded from the front.

On March 23, 1918, Base Hospital 32 received 350 wounded from the 42nd “Rainbow” Division, the majority suffering from burns as a result of exposure to mustard gas.15 Injuries from gas attacks were among the most common suffered by patients and treating them remained one of the most frequent and serious tasks of Lilly Base Hospital throughout the war. The hospital performed admirably during the first real test of its capabilities and as of June they had lost only two patients in their care. In the months that followed, the hospital encountered for the first time the infamous 1918 Spanish Influenza pandemic that was sweeping much of the globe. Over the course of ten days at the end of May, over one third of the hospital’s personnel had reported varying degrees of flu; though, luckily, it lasted only a brief period of time and caused no deaths.16 This would be their first but not their last encounter with the virus that would prove one of the most deadly forces of the war for soldiers as well as civilians.

During the summer of 1918, the Allies turned the tide of the war by halting the summer German offensive and subsequently counter-attacking at Château-Thierry. Because of these offensive pushes, Base Hospital 32 would see additional spikes in the number of incoming wounded. Over the course of June and July they received 2591 cases, primarily soldiers from the United States and France, with 513 patients being from the U.S. 26th Division alone, as well as 117 British troops and 12 German prisoners of war.17 During this time, the dramatic increase in number of wounded quickly exceeded the emergency capacity of the hospital, requiring some personnel to give up their quarters for hospital space and to instead sleep in tents in order to accommodate the overflow from the hospital. There was no space to spare at the hospital that summer, as many patients with less serious injuries took up cots on the floors of the hallways to free up the beds for the more serious cases.18 The incoming flow of wounded would slow in August before rapidly picking back up again in September and October, having 2319 and 2301 patients respectively.19 These were the result of the final Allied offensives of the war combined with a second, far more deadly wave of Spanish Influenza. In addition to the influx of soldiers suffering from the virus, many of the hospital personnel also contracted it which made treating the pandemic that much more difficult. Nonetheless, the hospital managed to perform admirably according to accounts such as that of Lt. Colonel Guy Rukke, commanding officer for Base Hospital 23 in Vittel, who observed the results of the hospital’s services during this period and reflected upon them stating, “The spirit shown is what is winning the war,” even despite an “extreme shortage of personnel … with this personnel depleted by illness.”20 Records indicate that the Hospital treated 1,020 cases of influenza and of the 118 patients of Lilly Base Hospital that died, 50 would be as a result of influenza, making it one of the most deadly conditions the hospital faced and making the wave of it during the final drive of the war, all the more troublesome.21 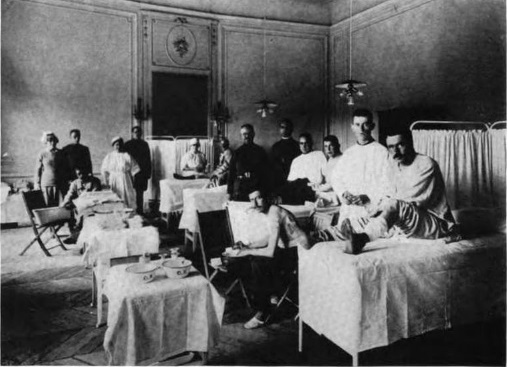 Following the signing of the armistice and the end of the war, the staff of Base Hospital 32 cheered along with the rest of the country, though they found themselves with little time for celebration. Though there were fewer patients with each passing day, the treatment of the remaining wounded would continue to occupy the attention of the hospital over the next few months. Nonetheless, the hospital’s staff could breathe a little easier, now having an end in sight and no longer hearing, in the words of one nurse from Elkhart, “the incessant roar of distant thunder” that had been heard for the past year.22 In addition, there remained the task of taking down and packing up the medical equipment to be returned to the US. Some of the nurses in the unit would accompany the army of occupation, but most would return home aboard The America. The nurses departed from Brest on March 3rd and arrived back in the United States at Hoboken, New Jersey on March 13th with the enlisted personnel returning from St. Nazaire a month later.23 The personnel were awarded two service stripes for their service in overseas as well as the insignia for the Lorraine Advance Sector.24 The hospital’s equipment would return later and would eventually be given to the city of Indianapolis to be used in the city hospital.25

One would be remiss not to mention the efforts of the Indianapolis chapter of the Red Cross and the civilians back home in Indiana who contributed the funds and supplies that were vital in supporting this hospital throughout the war. The women of the Indianapolis YWCA made 2,640 sheets and 1,920 pillowcases for use by the Lilly Base Hospital. The Decatur County Chapter of the Red Cross helped to provide the hospital with 2,859 hospital garments and supplies. The Indiana School for the Blind contributed socks, pillows, quilts, and numerous other articles for the hospital.26 This list names only a few of the many contributions of the Indiana citizenry who sought to ensure that Indiana’s hospital was as well-equipped as possible to accomplish its task. Without these heroes on the home-front, the hospital would not have been able to perform its duties as remarkably as it did.

Over its year of service, Base Hospital 32 would admit 8,506 Americans, 1,003 Allies, and 189 Germans totaling 9,698 admitted patients.27 Among the many ailments treated, most common were the treatment of injuries from shrapnel and mustard gas, as well as influenza and diseases caused by the unsanitary conditions that plagued the trenches such as Vincent’s angina, or ‘trench mouth’.28 Of these patients, 118 would not survive, leaving the hospital with a mortality rate of 1.22%, which Dr. Edmund Clark later reflected was “average”.29 Despite Dr. Clark’s more modest comments, the hospital’s record received a significant amount of public acclaim with the Indianapolis Chapter of the Red Cross describing it as “a notable record, one that elicited recognition and praise from official sources.”30 Colonel S. H. Wadhams, in charge of the medical department of the American Expeditionary Forces, also praised Base Hospital 32, calling it, “one of the best in France.”31 Through the efforts of the doctors, nurses, and personnel of Lilly Base Hospital as well as the Hoosiers at home who labored to provide them with the supplies they needed, Indiana made crucial contributions to the nation’s war effort; striving, as best as they were able, to curtail the cost of war.