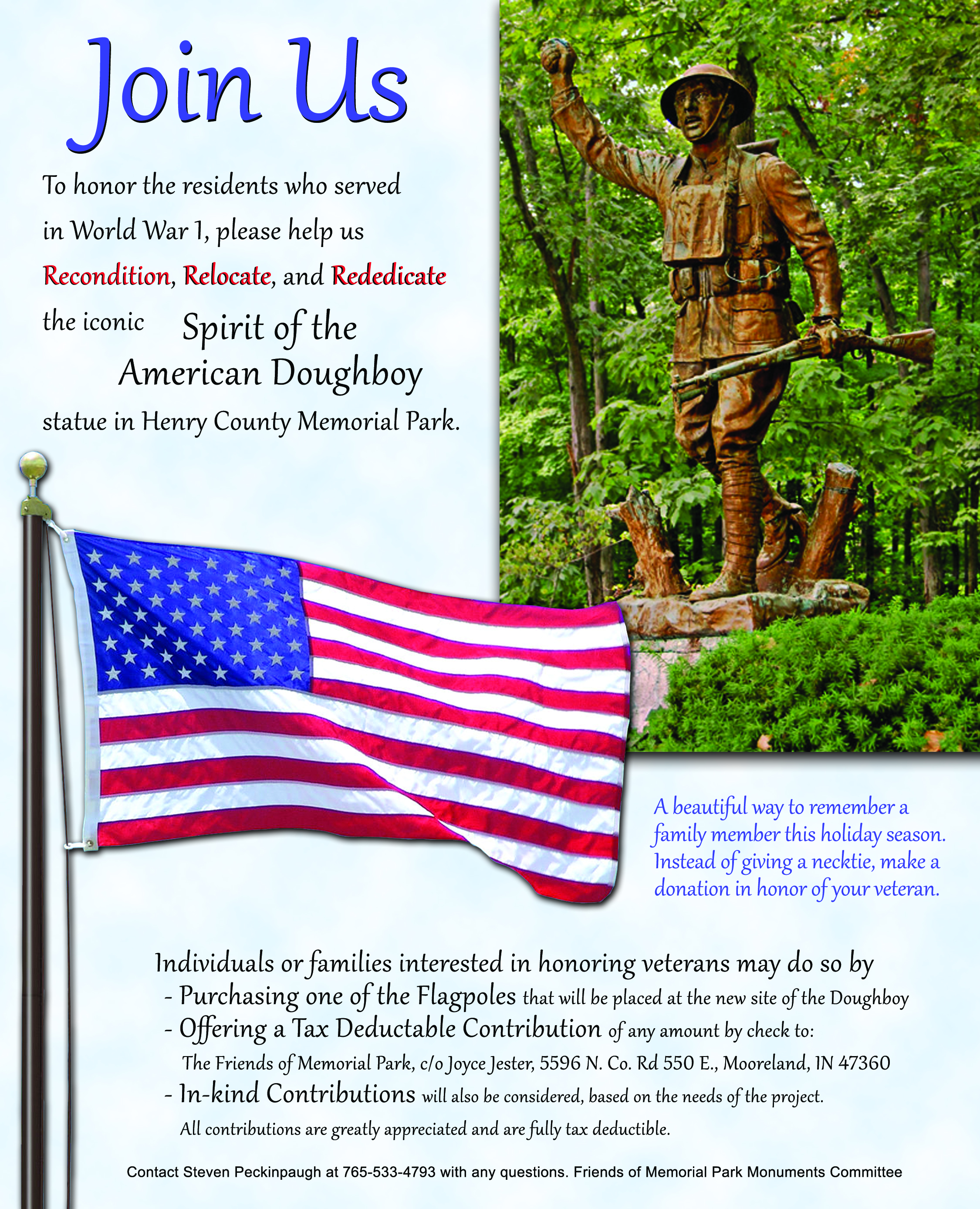 This project, beginning in November 2017,  will clean and repair the WWI Doughboy monument and finally place it in a more visible location, surrounded by flags of each military division, with the American flag towering over all. The $35,000 plaza memorial will be rededicated on Veterans' Day, November 11, 2018.

Henry County Memorial Park is the proud owner of a WWI Doughboy, an amazing pressed bronze sculpture, designed and crafted by Indiana sculptor Visquezney in 1920. It was presented to the park by the Henry County Chapter of the American War Mothers, dedicated August 25, 1929. Currently, in grave disrepair, both the bayonet and rifle sling are missing, as well as the left hand has broken loose from the cuff and has been wired back on to keep it in place.

In January 2017, a local organization, HOPE Initiative, was charged by the Henry County Commissioners and Henry County Memorial Park Board to conduct a community-involved assessment of the 238-acre park and to make recommendations to the Commissioners, the Board, and the County Council, recommendations that would enhance the current park.  In mid-June, a report was given to all three decision-making organizations in front of more than 200 audience members.

The recommendations were unanimously accepted.  Two are directly relevant to Indiana's WW I Centennial celebration, inspiring and educational, and creating a legacy.  The recommendations call for standing committees to caretake the park; the park is an official "war memorial" park; the standing committee on monuments will better ensure that appropriate care is given all the monuments that commemorate the service given by soldiers in defense of peace. This committee's work has led to a Veteran's Mall being created in front of the Smith Auditorium; the mall honors the WW I soldier by making the iconic doughboy statue a focal point.  The Veteran's Mall will be rededicated on November 11, 2018, one hundred years since the end of WW I.

Along with the outdoor mall, the lower part of the Smith Building is being transformed into a Veterans Museum, honoring all veterans.  The director of the local Historic Museum is creating apps that will cause all displays to be interactive.  Veterans will also serve as docents at the museum, educating museum visitors of the relevance of the artifacts to today's time.  A local muralist--and Marine-- is designing the walls and will create an artistic salute to veterans from all military divisions. Space is being held at the museum to show educational films.

Culturally inclusive and educational, this project will be open and accessible to the public, will honor the WW I Centennial, is locally funded, and is totally achievable, thanks to broad public support.