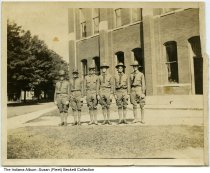 War and the Human Heart

“War and the Human Heart” is a concert event on November 11, 2018, exploring war and honoring veterans and their experiences, commemorating the 100th Anniversary of Armistice Day, including music, film and audio clips, images, readings and narration.

The concert is meant to honor all Indiana veterans on the 100th Anniversary of Armistice Day, including those who attended the University, as well as communicate to the audience on different levels what veterans have experienced in war.

In these days of the all-volunteer armed forces, only a tiny percentage of the U.S. populace have participated directly in the military—this is commonly referred to as the “civilian-military gap” and this concert will help bridge that gap. Valparaiso University has a special connection to WWI: during the war, the University hosted the Valparaiso University Training Detachment, through which over 1,000 soldiers received vocational training and became part of the University community.

We hope to attract a full house both from the University and, consistent with the University's educational outreach, the wider Valparaiso community.  To further the number of people exposed to this commemorative event, during the week before the concert there will be educational events, open to the public, at the University and in the community, about WWI and the music to be performed at the concert.  In addition, the music will communicate these messages on an emotional, as well as intellectual, level.