“History doesn’t repeat itself, but it often rhymes.”
- Attributed to Mark Twain

Historians make their living trying to decode the rhyme scheme of history, drawing threads of continuity between often disparate actions. Planted seeds, whether actions or ideas, can take decades or centuries to bear fruit, and it is the job of the historian to trace the heritage of events in order to make sense of the world. Often, this job is extremely difficult, but sometimes, events in history make clear their lineage. 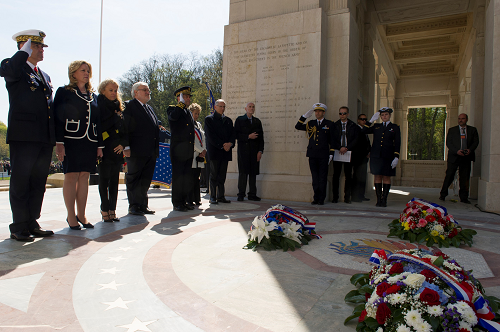 French and American officials lay wreaths at the Lafayette Escadrille Memorial.Last Wednesday, this lineage was evident to all guests present at the Lafayette Escadrille Memorial outside of Paris, honoring the 100th anniversary of the formation of the famous American volunteer flying unit from World War One. These brave men took to the skies of France to fight in her time of need, defying their country’s official position of neutrality. Many were inexperienced, but all were qualified to carry on the legacy of the Marquis de Lafayette, their gracious gesture completing a rhyme a century and half in the making.

In 1916, France was fighting for it’s survival; in 1776, the United States of America was fighting for its very identity. Overwhelmed by the strongest military force the world had ever seen, America sent out a call for any and all help in gaining its independence from Britain. In France, this call was seen as a politically pragmatic way to stymie its longtime rival, but when Britain threatened war if France intervened in North America, King Louis XVI issued a decree banning all French officers from serving in America. One man, however, understood that the principles of the American revolution were stronger than the words of any king. “True republicanism,” said the Marquis de Lafayette, “is the sovereignty of the people.” With these words, Lafayette set sail in defense of America on April 20th, 1777, 139 years to the day before an American squadron took to the skies in defense of France. 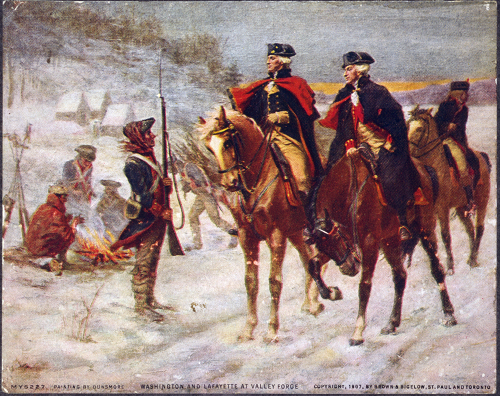 Washington and Lafayette at Valley Forge.

Lafayette fought in and endured some of the most punishing and important events of the American Revolution, surviving the brutal winter at Valley Forge with George Washington and commanding the siege of British forces at Yorktown. Lafayette also successfully lobbied the French government to intervene in the revolution, delivering the French armada that effectively trapped the British at Yorktown. Perhaps more than anyone else at the time, Lafayette understood the importance of the American Revolution for his native country. In a letter to a friend, Lafayette wrote “my heart has always been truly convinced that in serving the cause of America, I am fighting for the interests of France.” Not even Lafayette, however, could have seen how directly his service to America would later help the French nation.

A war that was supposed to end by the fall of 1914 had turned into a grim, unceasing reality by 1916. Hundreds of thousands of German troops occupied French territory, and the cold industrialization of warfare had decimated the French army and population; by war’s end, France would suffer six million deaths and casualties. In the United States, newspapers relayed these horrific figures on a daily basis, making the public wary of intervening in such a gruesome spectacle. That sentiment was a potent political force, too, as President Wilson successfully ran for re-election in the 1916 race almost solely on the slogan “He Kept Us Out of the War!” 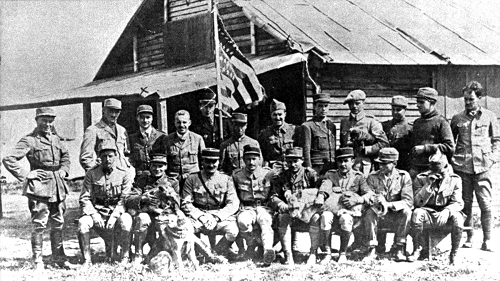 The men of the Lafayette Escadrille.Some Americans, however, knew that the horrors of the modern battlefield were worth enduring in defense of the French ideals of Liberté, Égalité, Fraternité. Despite the official policy of their nation, these men crossed the Atlantic to help their ideological brethren, heading east this time instead of west. They successfully lobbied the French government to allow them to form their own American air unit, in the hopes that it would rouse interest in the United States for joining the war, and the American Escadrille was formed on April 20th, 1916. Germany, however, soon protested, saying that the name signaled tacit support from a country that was officially neutral. The men of the unit could think of only one other name to appropriately honor the bonds between France and America: The Lafayette Escadrille. Their efforts to change sentiments in the United States succeeded, and the US declared war on Germany less than a year after the formation of the Escadrille.

Like the French armada that sailed the Atlantic to defeat the British at Yorktown, hundreds of thousands of young Americans began recrossing the Atlantic to deliver the crushing final blow to Germany. “Lafayette, we are here!” proclaimed Colonel Charles E. Stanton in a speech at Lafayette’s tomb, fulfilling the most sacred of debts. 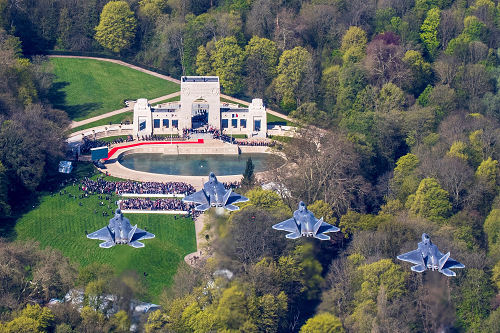 F-22 Raptors of the US Air Force fly over the ceremony honoring the hundredth anniversary of the formation of the Lafayette Escadrille.Sixty-eight American pilots are buried at the Lafayette Escadrille Memorial in Paris. Their tombs, kept not in a dark crypt, but rather in sunlight, exposed to the air which was their element, represent the sacrifice of men who, like their squadron’s namesake, understood the supremacy of ideals over politics, men who individually gave what we as a nation were not yet ready to give. While war had changed significantly since Lafayette, the principles had not. The ceremony in Paris this week celebrated the men of the Lafayette Escadrille, but it was truly these principles that were being honored. Liberté, Égalité, Fraternité. Liberty, Equality, Fraternity. Fraternity: A brotherhood between two people, between two nations, born from mutual sacrifice, lasting centuries.