Medicine In World War I

A century ago, American medicine went to war.  It was a huge challenge.  Over a few months, an entire system of battlefield health care was organized.  Doctors, nurses, corpsmen, and many others were recruited and trained.  People and equipment were transported to Europe by sea, through submarine-infested waters.  Yet, it all worked.  This website tells the story of how the United States met this challenge.

At first glance, the military medical system seemed unprepared for war.  After all, the entire Army was around 130,000 men, scattered in small units around the United States, and around the world.  There was no previous experience of delivering care to large units, such as divisions.  Preparing for conflicts of millions of men on a side, and casualties in the tens of thousands, had been unheard of for 60 years. 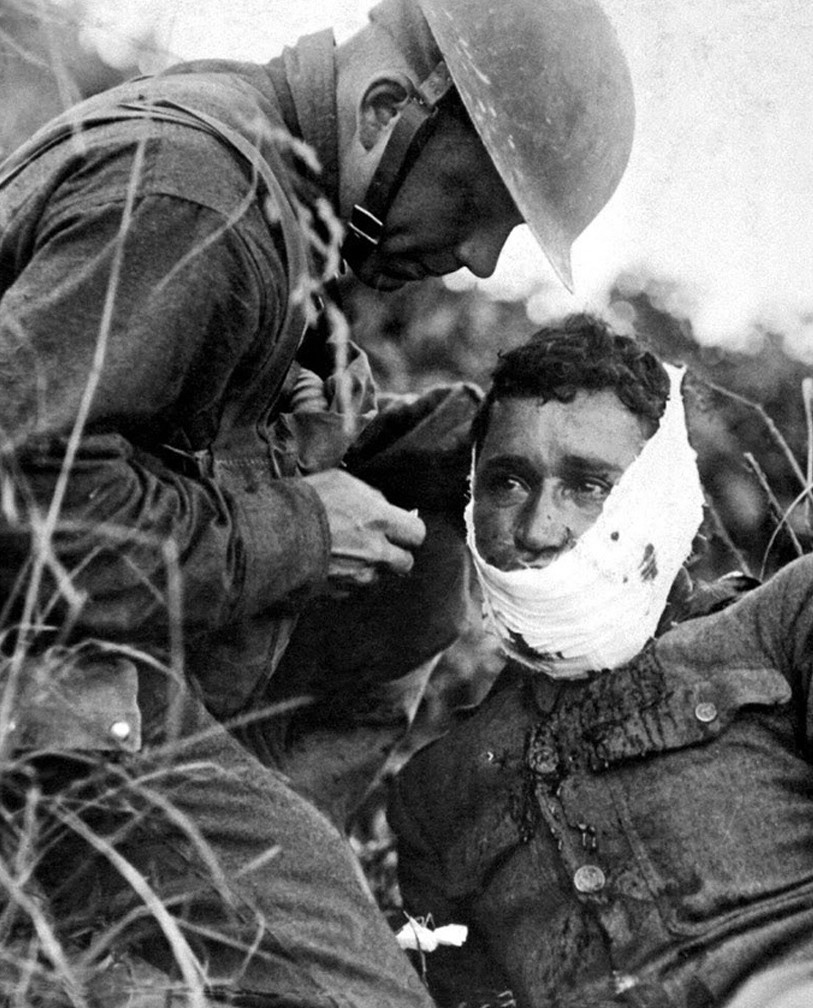 Wounded Soldier Receiving Initial Care on the Battlefield (110th Infantry Regiment)But the system was ready to accept major changes.  Following the public outcry over the large number of soldiers dying from disease in the Spanish American War of 1901, the Army Medical Corps had re-organized, establishing medical, dental, veterinary, and nursing corps, and the Army reserve corps for medical officers, to be mobilized in case of war.  This last was the precursor of the Army Reserve system today.  With the war looming, the National Defense Act of 1916 enacted further organizational changes.  By 1917, the Medical Corps was, on paper, prepared to field a number of hospitals.  Unfortunately, these were neither staffed nor equipped, and shortages of personnel was to be a chronic problem.

Medical organizations prepared for war.  The American Medical Association and the American College of Surgeons formed a Committee on Medical Preparedness.  Franklin H. Martin, head of the American College of Surgeons, was particularly instrumental in recruiting surgeons to the Medical Reserve Corps in anticipation of the war.  The National Academy of Sciences created the National Research Council, which became an arm of the National Defense Council.   Universities such as Johns Hopkins, University of Kansas, and Harvard University, were to organize and field hospital units, operating under the overall control of the army.

The Red Cross was at this time an organization which provided ambulances and delivered medical care, besides its relief activities, was of great assistance.  It had been involved in the war since 1916, providing 47 ambulance units to assist the British and French armies.  All of these units were taken into the Army after war was declared.

World War 1 represented the coming of age of American military medicine.  The techniques and organizational principles of the Great War were greatly different from any earlier wars, and were far more advanced.  Medical and surgical techniques, in contrast with previous wars, represented the best available in civilian medicine at the time.  Indeed, many of the leaders of American medicine were found on the battlefields of Europe in 1917 and 1918.   The efforts to meet the challenge were often hurried.  The results lacked polish, and were far from perfect.  But the country can rightly be proud of the medical efforts made during the Great War.