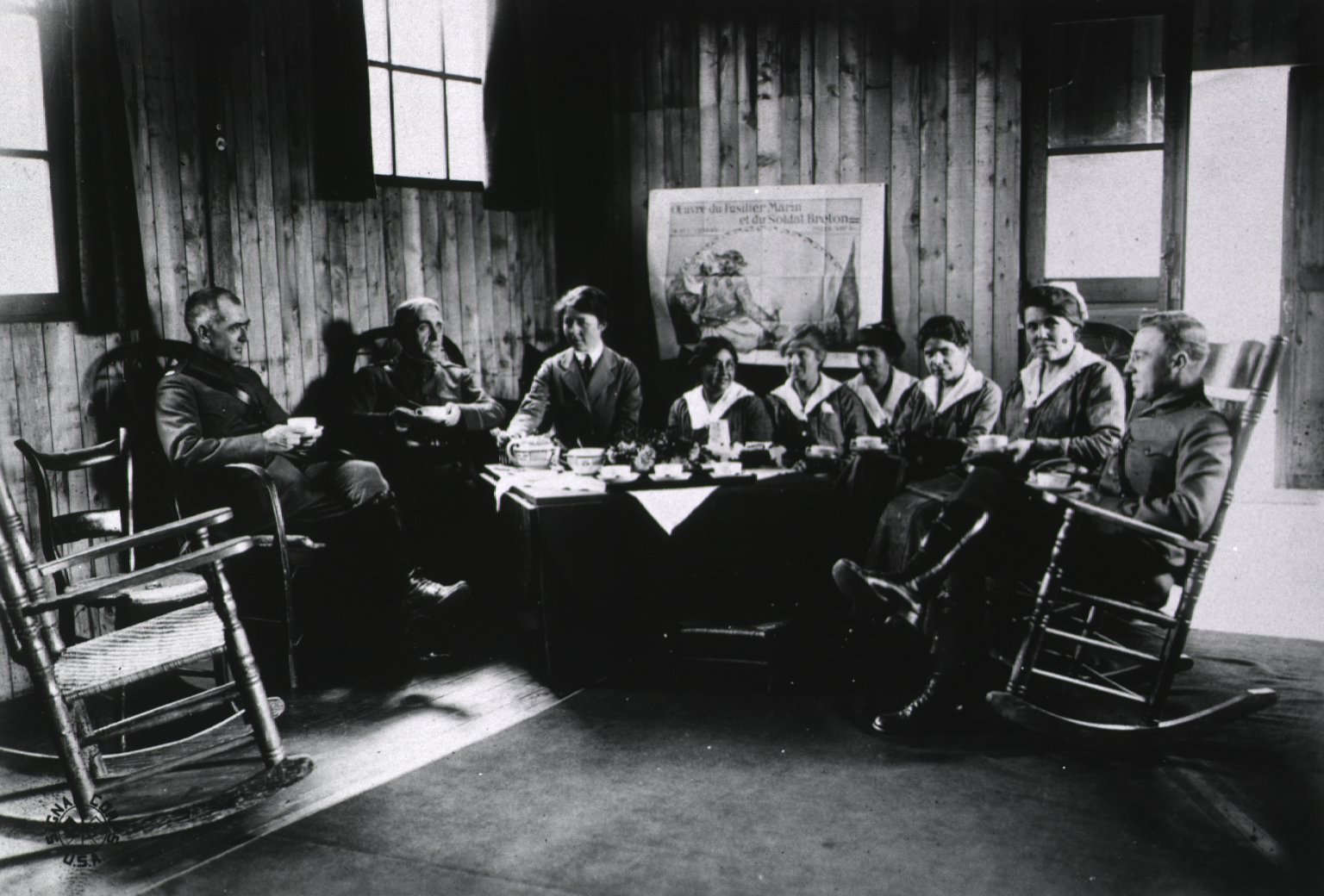 Base Hospital No. 17 was organized in September, 1916, at the Harper Hospital, Detroit, Mich., and was mobilized there on June 28, 1917. On July 3, 1917, the organization was transferred to Allentown, Pa., leaving there July 11, for New York, where it embarked on the Mongolia and sailed July 13, 1917. It arrived at Southampton, England, July 24, by way of Plymouth, England, and at Le Havre, France, July 25, 1917. It remained at Le Havre until July 28, when it proceeded by rail to its final destination, Dijon, Department Cote D'or, in the advance section, arriving there July 29, 1917.

Base Hospital No. 17 was the first American organization to arrive at that station, where it functioned as an independent hospital, until January 8, 1919. At Dijon the unit was assigned the Hospital St. Ignace (French Auxilliary Hospital No. 77), then operated by the French Army. The French had about 230 patients in the hospital when the unit arrived, the evacuation of which was not completed until August 18, 1917. It began receiving American patients on August 21, 1917, but the hospital was not officially turned over to the commanding officer until September 2, 1917. 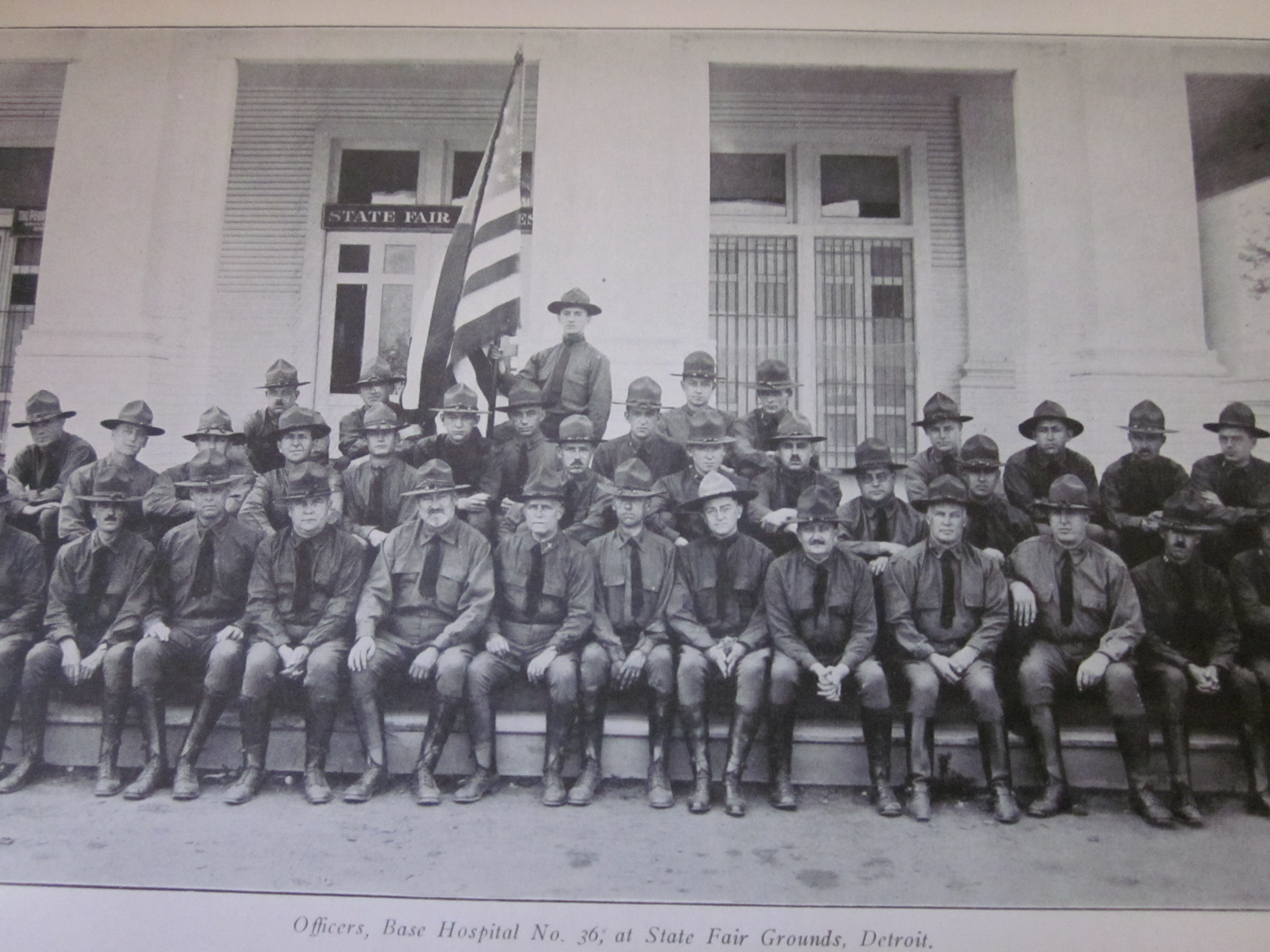 Base Hospital No. 36 was organized in April, 1917, at the Detroit College of Medicine and Surgery, (Wayne State University Medical School) Detroit, Mich., and was mobilized at Detroit, August 23, 1917. The unit remained in training there for two months and sailed from New York on the Orduna, October 27, 1917, arriving in France on November 11, 1917, and at Vittel, its permanent station, on November 17. It was the first 1,000 bed hospital of the A.E.F., later forming a part of the Vittel-Contrexeville hospital center. It occupied 16 hotels and villas and had a total bed capacity of 1,650. The first patients were received December 8, 1917. During its activity, December 8, 1917, to January 14, 1919, the hospital cared for 14,114 medical and surgical cases, of which 1,376 were allied sick and wounded. 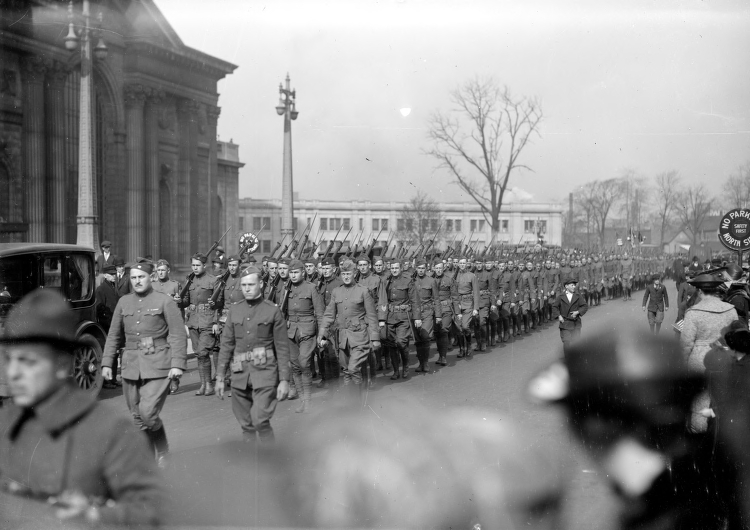 Captain E.I. VanAntwerp Leads Company D of the 16th Regiment of Engineers (Railway) on May 6, 1919 in front of the Michigan Central Depot in Detroit, MI.

Michigan's Only All Volunteer Regiment

The 16th Regiment of Engineers (Railway) was Organized, Mobilized and Trained with in the City Limits of Detroit, Michigan.

War had become a gigantic concentration of man power and equipment for the actual waging of offense. This necessitated an unprecedented non-combatant backing of man power to supply the battle line with needed food, munitions, sanitary, medical and surgical care, means of communication and transport, and countless other accessories.

Linkage of supply to front lines had to be maintained by railway and trackage, as no other means could convey the great tonnages that had to be transported to the actual scene of battle, a line four hundred miles long in Europe's "Western Front". This Fighting line was cut into sectors that were held by the various armies of the Allies, and the required transport to each of these armies was so arranged that there would be minimum of cross-traffic to impede the flow of supplies. 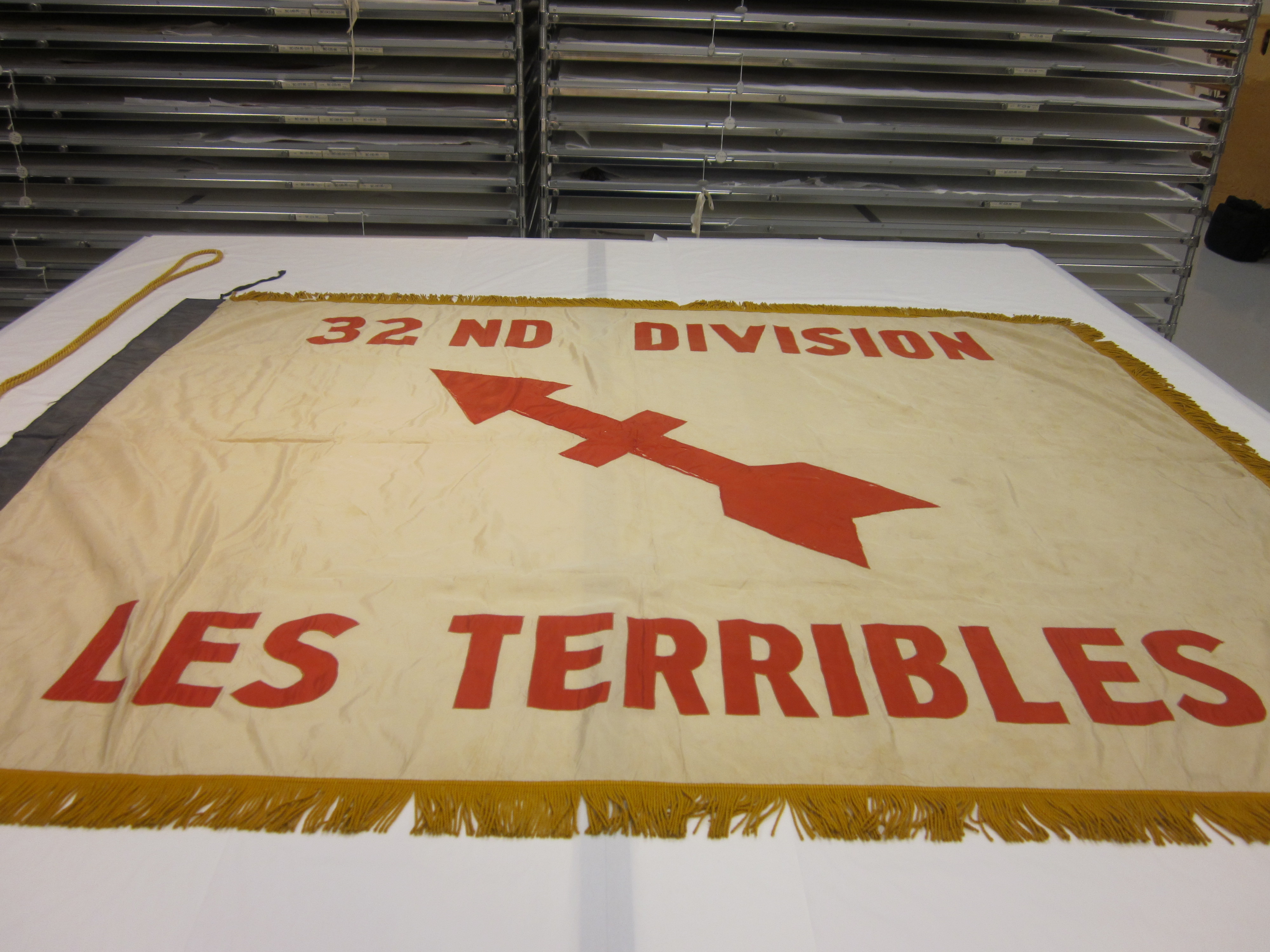 Story of the 126 Infantry Regiment

It was not until July 3rd, 1917, several months after the entrance of the United States into the World War, that the Proclamation of the President, calling into Federal Service the troops of Wisconsin and Michigan, was issued.

From April 6th till July 3rd, 1917, might properly be called the organization period. It was a foregone conclusion that the 126th, through the 32nd Michigan Infantry would be called upon for service. Colonel Westnedge, as Commanding Officer of the 32nd Michigan Infantry,was busy perfecting his regiment and that his work was well done is shown in the history of the Regiment. Indeed it made a splendid showing when finally gathered together at Grayling, Michigan, the training camp of the State, in mid July.

At Grayling the recruits were given their first instruction and the period from arrival there until leaving for Camp MacArthur at Waco, Texas, was profitably spent in recruit instruction and in equipping the Regiment for the hard long hours of training which was to be its lot in sunny Texas.

General Order Number 101 War Department, 1917, organized the 32nd Division (Old 12th) from the troops of Wisconsin and Michigan. At this time Wisconsin had six Regiments of Infantry (two organized after the beginning of the war) and Michigan had but three Regiments. The original plan was to form in the re-organization four Regiments of Infantry of which Wisconsin would have three and Michigan but one. General Covell, the Commanding General of the Michigan troops, and other Michigan officers objected so strongly to this that the outcome of it was the organization of two Brigades, one from each state. The 63rd Brigade consisting of the 125th and 126th Infantry was formed of Michigan troops with General Covell commanding.

The 126th Infantry, Colonel Joseph B. Westnedge, Commanding, was formed from the 32nd Michigan Infantry and part of the 31st Michigan Infantry. The final reorganization was not competed until late in September, owing to the late arrival of the 33rd Michigan Infantry at Waco, due to their service at the Straits and Camp Custer, as guard outfit.

Read more: The Story of the 126th Infantry Regiment

As a tribute to the gallant performance of the 119th Field Artillery, it is with pleasure I review briefly the exploits of its battle activities in recent military operations on the western front which terminated with the signing of the armistice November 11, 1918.

Submitting conscientiously to the hard routine training in the United States, you were rushed to France in February 1918, with the first few hundred thousand arriving with the Fifth American division. Here again the command eagerly and rapidly mastered the technique in modern field artillery of the French school at Camp Coetquidan, which was completed late in May. Early in June you were sent into the Toul Sector for preliminary training in support of the 26th Division. On June 11th our batteries sent forth their first ultimatum to the enemy. We suffered our first casualties in this sector. I consider the command was extremely fortunate in having as its tutor the more experienced elements of the 26th Division. 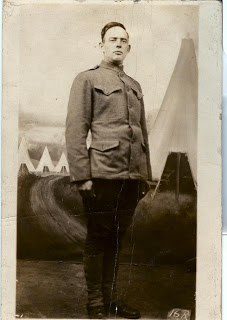 Joseph Guyton was born on June 10, 1889 in Evart, Michigan, a small town known for its lumber mills back in its day.  Pioneers were just settling the area back in 1866 through homesteading after the Civil War.  He attended a small school house just outside of town.  At age 20 he married his sweetheart Agnes Winona Baker from Lake City, Mi.  Two years later in 1911 they had a daughter named Olive Clara Guyton.  Life at this point was going very well.        In 1914 war broke out over in Europe.  America tried to stay neutral but Germany kept violating our neutral status.  On May 7, 1915 German U-boats sunk the sister ship to the Titanic, The Lusitania.  1198 passengers lost their lives including 128 American's.  America was very upset and cries for war emerged across the country.  Finally on April 6, 1917 the United States of America declared war on Germany.  Some men enlisted and others were drafted.  Guyton was drafted.       Under military law Guyton could have refused to go since he only had a daughter and no name sake in case he should die.  Guyton was too proud not to go.  He felt it was his duty to go since he was called to war.  Guyton was with the 126th Infantry Regiment which was attached to the 32nd Infantry Division also called the Red Arrow Division. 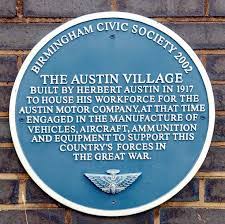 During the war, Michigan changed the world, it showed Europe and the World how to wage a modern industrial war and in the process became an economic power house in the United States. Michigan’s economy during the early 20th century was based on forestry, mining and agricultural. During the Great War, the  economic focus shifted to engineering and manufacturing. Through the introduction of the well known “assembly line” process engineering and manufacturing employed un-skilled labor and developed the capabilities of those employees to assemble highly engineered parts.  Besides manufacturing automobiles in this way, houses, airplanes and other war materials were manufactured using the assembly line. One of Michigan’s success stories of the World War One era is the story of Austin Village in the United Kingdom.

To the author’s knowledge, there are no monuments for Home Front victories. The Great War changed the lives of the people of Michigan, both those that went overseas and those who served on the “Home Front”. The soldiers obvious influence can be seen as battles won or lost and great victories are marked with monuments, but what about the Home Front victories? If, however, our definition of monument is changed, Home Front victory monuments can be identified One such example of a Home Front Victory monument is Austin Village, Birmingham, United Kingdom.  Almost 100 years later, it still stands as a monument to the Aladdin Company, Bay City, Michigan and the assembly line.