NEW ULM — A rare artifact is being loaned to the Brown County Historical Society (BCHS) Museum for its World War I exhibit.

Jay Pfaender, great-grandson of one of New Ulm’s founders, William Pfaender, has loaned a loving cup awarded to his grandfather Major Albert Pfaender.

The cup’s inscription reads: “Presented to Major Albert Pfaender by the officers and men of the First Battalion, Second Regiment Infantry, on the occasion of their muster out of federal service, Jan. 24, 1917 in token of their high esteem and appreciation of his kind and efficient leadership during their term of duty on the Mexican border.” 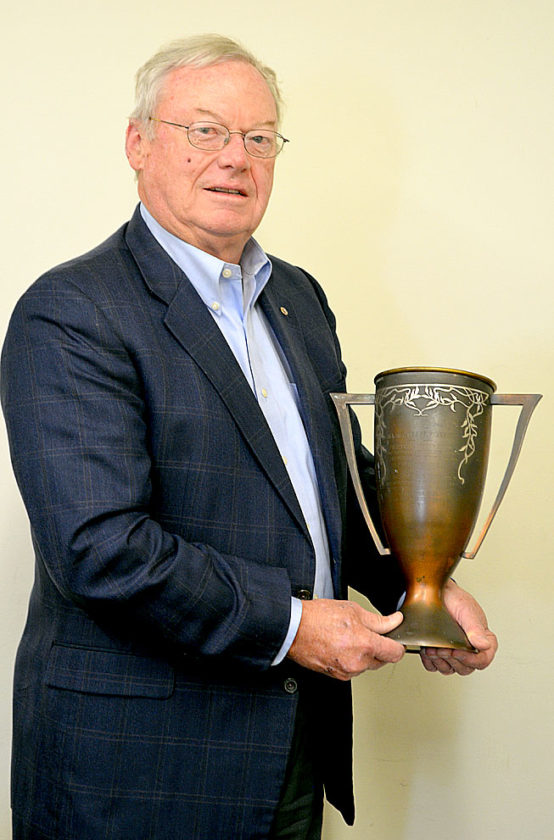 Albert was surprised with the cup by his troops upon arriving back in New Ulm after their service attempting to catch Pancho Villa.

It is particularly unique due to the circumstances surrounding its gifting.

“I am an army guy, we do not give loving cups to your commanders,” Jay Pfaender said. “You don’t do that.”

NEW ULM — The influence of business interests on Minnesotan political interests during the Great War was highlighted during a WWI speaker series event.

Historian Mary Wingerd presented “So Long, Civil Liberties: World War I and the Rule of the Minnesota Commission for Public Safety” Thursday night. 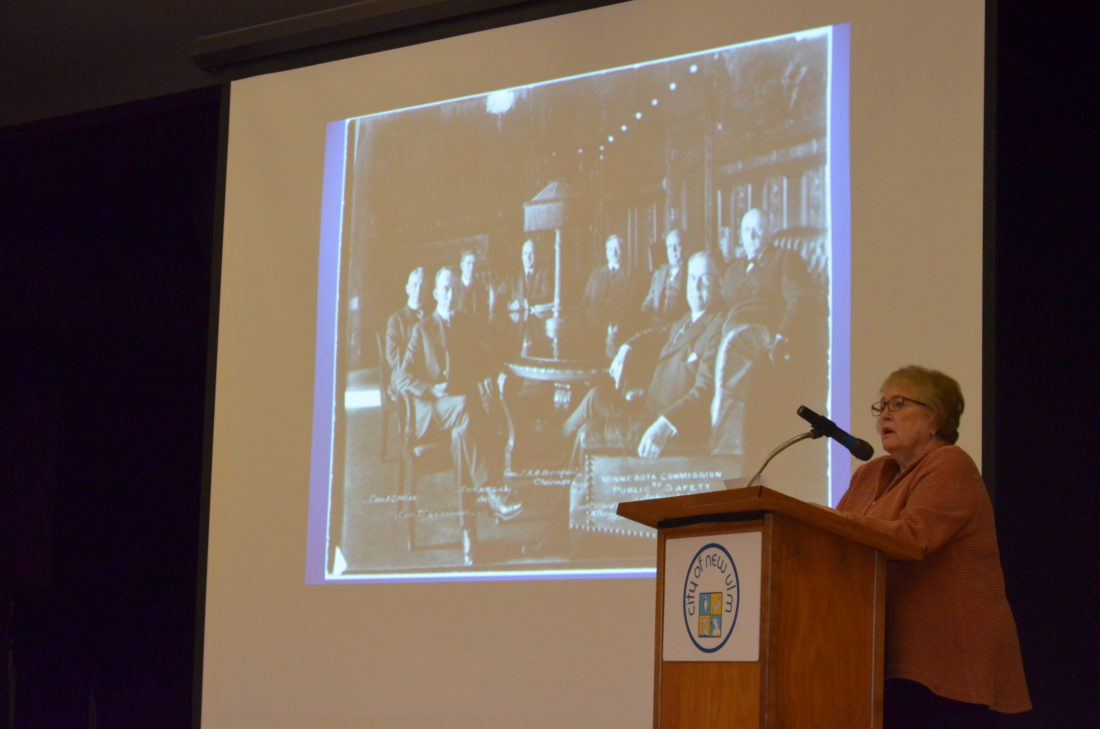 On its face, the commission was intended to stamp out pro-German and seditious activity. But Wingerd argued it had entirely different motives.

“It is my contention that this was primarily a smokescreen to provide cover for what were the commission’s real targets: groups that in fact posed a genuine danger to the commissioners and their backers, if not to the state and the nation,” said Wingerd.

The commission was formed in the spring of 1917 by the Minnesota Legislature on the eve of what was probably one of the most unpopular wars ever declared, Wingerd said.

However, probably in part due to

NEW ULM — There are Civil War Buffs and there are World War II experts, but few people know much about the First World War or New Ulm’s unique history with the war.

The Brown County Historical Society and Museum has decided to shine a light on this forgotten past with a new exhibit “Loyalty and Dissent-Brown County and World War I.” 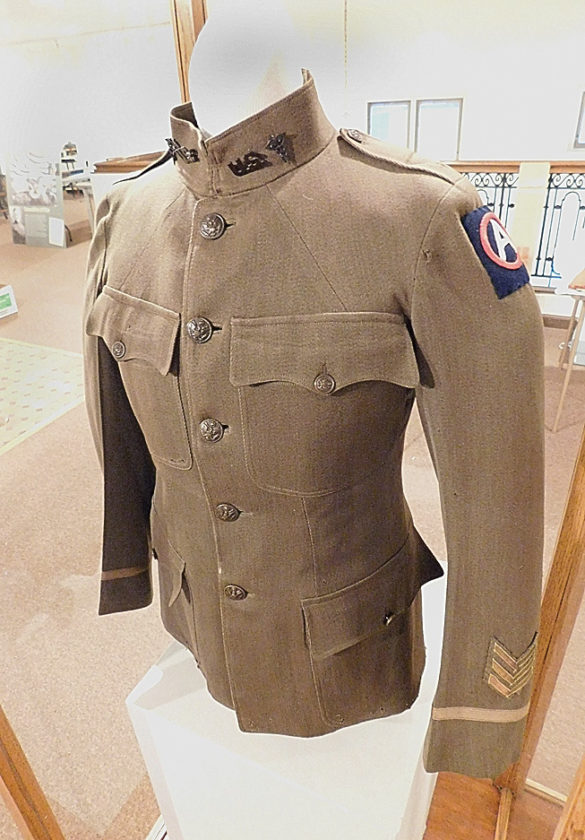 “WWI was an incredible time of dissent in New Ulm,” Historian Dan Hoisington said. “With New Ulm being so German it played such a different role in the war than other cities.”

The United States did not enter WWI until April of 1917. Before that time America attempted to stay neutral, but many Brown County residents still felt loyal to the Fatherland. The declaration of war meant German-Americans living in Brown County might be sent overseas to fight family and friends. Many chose to protest the war.

NEW ULM — Nearly 75 years to the day after the dedication of the original statue, New Ulm veterans, city officials and Brown County Historical Society members rededicated the “Spirit of the American Doughboy Statue” that has stood in the New Ulm City Cemetery Soldier’s Rest section. 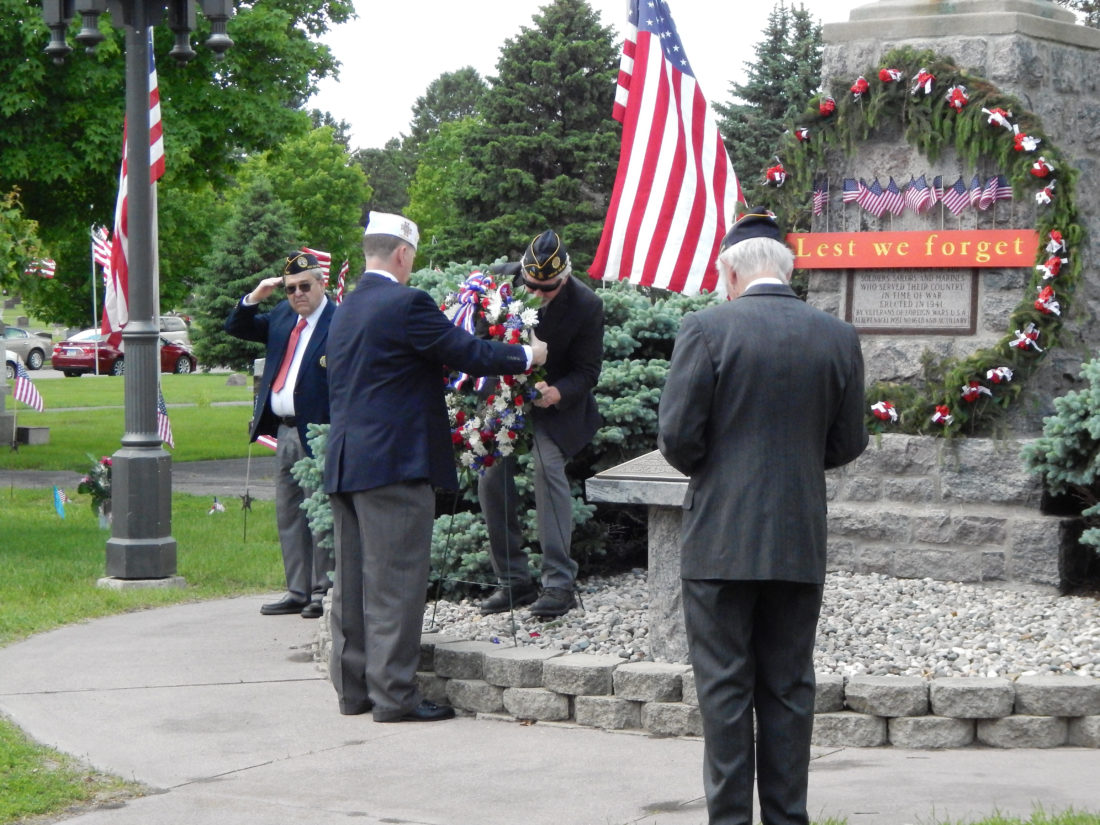 The Doughboy, with a rifle in one hand and a hand grenade raised in the other, was designed to represent the grim realities of war that the average American soldier endured in World War I, Mayor Robert Beussman said. The designer, Ernest Moore Viquesney, didn’t want his statue to glorify warfare.

The statue is one of many created from Viquesney’s original designs across the nation, but it is the only one in Minnesota.

NEW ULM — The Brown County Historical Society continued its speaker series on World War I (WWI) Thursday, with a presentation by Greg Gaut on the Minnesota Home Guard.

The presentation took place in the Library and was well attended by the public.

During the United States’ entry into WWI, the efforts on the home front were contentious. The public was not unified in the decision to join the war. President Woodrow Wilson had campaigned and won re-election five months earlier on a promise he would keep the United States out of the war.

The institution of the draft made the choice even more unpopular. Because of continual disputes among labor organizations, suffragists, immigration, the fight for prohibition and the rising gap between the rich and poor, the United States was almost at war with itself.

Some kids are diving into pools this summer, others are diving into local history. Among the latter are 20 South St. Paul youth who are working with the Dakota County Historical Society to curate an exhibit on World War I. The young researchers are spending their days poring over archives, microfilm and artifacts to find materials specific to the country for an exhibit to be unveiled next year to coincide with the 100th anniversary of the end of the "war to end all wars." 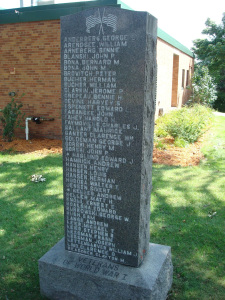 Even before I set out to look at how the First World War has been commemorated here in Minnesota, I assumed that the vast majority of Twin Citians would be hard-pressed to identify a single WWI memorial in the metro area. Even those who drive, bike, jog, and walk on or along Victory Memorial Drive in Minneapolis — how many know which victory is being memorialized?

Since 2003 I’ve attended Salem Covenant Church in New Brighton, MN, and more than a few times driven past that suburb’s small city hall. Until three weeks ago, I hadn’t the vaguest notion that standing in front of that building is a small granite monument to the eighty-five townsfolk of New Brighton who served in the military during the war — four of whom died.