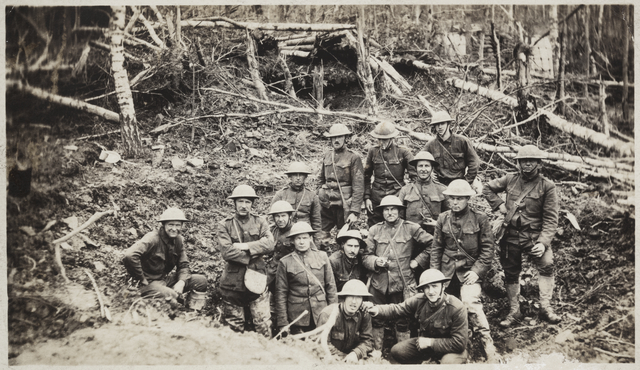 In July 1916, because of border raids conducted by Pancho Villa and the courting of an unstable Mexican government by Germany, President Woodrow Wilson used his new legal authority to mobilize the nation's entire National Guard for patrol duty on the U.S.- Mexican border. The Minnesota Guard was sent to Camp Llano Grande near Mercedes, Texas. Although they never saw fighting, their border duty helped prepare them for a much bigger challenge: World War I.

Barely home from Texas, Minnesota Guardsmen were again mobilized when the United States entered the war against Germany in April 1917. Most went directly to Camp Cody near Deming, New Mexico, for training with a newly organized 34th "Sandstorm" Infantry Division. The 34th consisted of Guardsmen from Minnesota, the Dakotas, Iowa, and Nebraska.

The 34th was eventually named as a depot division and broken up. Minnesotans were reassigned and sent to France as individual replacement troops while the division was reorganized and filled with new draftees from the southwest. Fortunately, Minnesota's field artillery regiment remained intact. Redesignated as the 151st Field Artillery, it became part of the 42nd "Rainbow" Division where it fought with great distinction in France.
- https://en.wikipedia.org/wiki/Minnesota_National_Guard

Camp Cody was a WW1 Army camp in Deming, New Mexico in 1917 and 1918. You can find more information and pictures at: http://demingnewmexico.genealogyvillage.com/CampCody/cw01.htm

Join the discussion on Facebook!Save